The federal budget’s overly cautious timeline for opening up Australia’s international borders in mid-2022 lacks ambition and is transparently motivated by political goals.

Such a timeline extends beyond a probable election in early 2022 even though a large majority of the adult population should be vaccinated for COVID-19 by the end of this year. No Australian political incumbent has lost in the COVID “keeping the community safe” era. 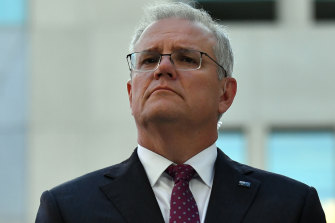 The political and community COVID-19 response and “precautionary principle” contained within much medical advice have served us well in achieving community control. Our ambition should now turn to a pathway out of the pandemic’s constraints, with a risk-averse approach compromising this endeavour.

The continued rise in COVID-19 cases, most marked and confronting in India, and low global vaccine protection – only 4 per cent fully covered – suggests major disease burden will continue for two or three years. It’s not feasible for Australia to remain in an elimination bunker to ride out the COVID-19 storm.

There is an alternative strategy involving accelerated vaccine uptake, initially aimed at providing “disease immunity” with subsequent herd immunity effects, then easing of the levers used to control infection risk during next summer.

The Australian COVID-19 vaccine rollout has been painfully slow – about 3 million vaccinations delivered in three months – but there is cause for optimism over coming months. First, local manufacturing of AstraZeneca vaccine is optimised, which is crucial with a limited Pfizer vaccine supply until the fourth quarter of 2021. Paying “obscene prices” for Pfizer or other mRNA vaccines was never going to provide a more rapid pathway out, given the limited supply; nor was local mRNA manufacturing, given complexity and timelines for the development of such capacity. This contrasts with the sensible exploration and investment in such technology announced in the budget. 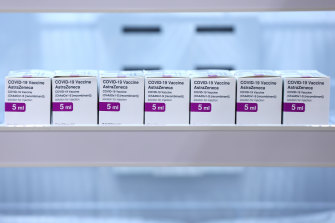 Most of the Australian adult population should be vaccinated by the end of the year.Credit:Getty

Second, enhanced state government involvement through mass vaccination hubs and other clinics will accelerate the uptake.

Third, the growing body of real-world data on the effectiveness of COVID-19 vaccines is remarkable. Of greatest relevance to Australia are three major studies from Britain, including a comparison of AstraZeneca and Pfizer vaccines. Clinical trials of COVID-19 vaccines evaluated their ability to prevent COVID-19 illness (SARS-CoV-2 infection with symptoms). This “efficacy” appeared to vary considerably, with mRNA vaccines, including Pfizer, 95 per cent protective, while AstraZeneca offered 60-70 per cent protection and was thus maligned as “moderately effective”.

But clinical trial populations and settings varied, making comparisons problematic. Furthermore, all trials were “underpowered” to evaluate efficacy against severe disease and had limited data on prevention of all infections (symptomatic plus asymptomatic).

Subsequent real-world studies, with greater numbers vaccinated, have addressed these gaps. In a Scottish study, both AstraZeneca and Pfizer prevented about 90 per cent of severe COVID-19 and hospitalisation after just one dose. An English study – involving 370,000 people randomly chosen and followed with regular swabs for detection of SARS-CoV-2 – showed two-thirds of all infections were prevented following one dose and again with no difference between vaccines. A further English study showed vaccine “breakthrough” cases of infection were half as likely to transmit infection. Even higher levels of protection are expected following a complete vaccination. 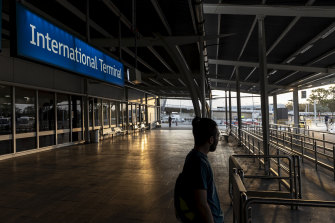 Australia is in danger of being left behind if its international borders remain closed for too long.Credit:Brook Mitchell

These findings have major implications for Australia and its pathway to relative COVID freedom. They confirm high-level “disease immunity” should be provided, particularly relevant for initial high-priority populations. They raise prospects of major herd immunity effects that should prevent large outbreaks, possibly even without children being vaccinated.

Most importantly, they confirm Australia’s current strategy as logical and potentially highly effective: AstraZeneca vaccine for 50 years and above and Pfizer vaccine in younger adults with a poorer risk-benefit equation related to, albeit rare, severe blood clot events. Novavax vaccine should also contribute later this year, even if delayed somewhat from the original timeline.

The additional layer of protection these vaccines provide for hotel quarantine staff is essential to reduce the risk of breaches. Together with strategies to reduce aerosol transmission within hotel quarantine sites, they should ensure Australia never again denies residents the right to return home.

The decision to halt flights from India was appallingly inhumane, unnecessary from a public health perspective and derived from a problematic combination of medical advice risk-averseness and political opportunism.

If Australia wants to avoid being left behind, the pathway to opening up will require some risk. The first “precautionary principle” to be dropped must be interstate border closures with less than a handful of cases. International travel should be considered for those fully vaccinated, with more limited home quarantine on return.

Much will be learnt from countries such as Israel and Britain over the coming months as they open up, before Australia has to make decisions on the need for childhood vaccination for herd immunity effects. If vaccine uptake accelerates, by late 2021 or early 2022 Australia should remove international travel restrictions, as severe disease and large outbreak risk would be low.

Many northern hemisphere countries will open up in their coming summer and we should follow in our next summer. This outlook may be overly optimistic – Panglossian even – but we need to move beyond the simplistic slogan of “keeping Australians safe” to more realistic public health and societal goals driven by balanced risk and benefits.