A Russian court jailed Navalny on Tuesday and handed him a three-and-a-half-year sentence in a ruling the Kremlin critic blamed on what he called President Vladimir Putin’s hatred and fear of him. 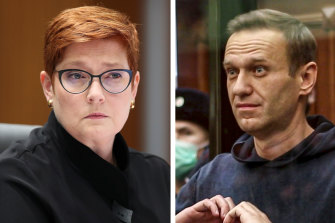 Navalny’s lawyer said the anti-corruption campaigner would only serve two years and eight months in prison because of the time had had already spent under house arrest.

“Australia is deeply concerned by Russian authorities’ arrest and subsequent sentencing of Alexei Navalny,” she said.

“The European Court of Human Rights concluded that Mr Navalny’s 2014 conviction, which was used as grounds for his current detention, was ‘unlawful’ and ‘politically motivated’. We call for Mr Navalny’s immediate and unconditional release.”

Navalny, 44, was arrested on January 17 after returning from Germany, where he spent five months recovering from nerve-agent poisoning that he blames on the Kremlin.

Tens of thousands of protesters took to the streets this week across Russia to demand the release of Navalny, with more than 5000 people detained by police.

Senator Payne said Australia was concerned by Russia’s detention of peaceful protesters and journalists in recent weeks and called for their release “without delay”.

“Australia supports all peoples’ right to freedom of expression and peaceful assembly,” she said.

Australia and Russia have had a frosty relationship in recent years with former Prime Minister Tony Abbott famously vowing to “shirt-front” Russian President Vladimir Putin over the loss of Australian lives in the MH17 Malaysian Airlines tragedy.