When we turned off the Wi-Fi on the fictionalised and self-isolating versions of leading British actors David Tennant and Michael Sheen in Staged last September, the two pals has been roused from their stay-at-home inertia and rampant self-doubt by a frank motivational speech courtesy of Dame Judi Dench – sweary bits and all. Britain was still shut down, but the duo were ready to act up, ending a show that deftly mixed the excruciating with the empathetic on a resilient note. It was, seemingly, mission accomplished. 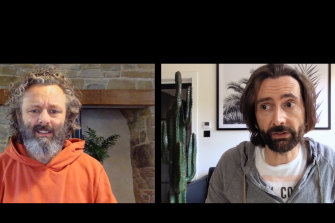 Michael Sheen and David Tennant return for a new season of Staged.Credit:ABC

But COVID-19 hasn’t gone away, and neither has Staged. The second series of the BBC comedy is now streaming on the ABC’s iview platform just six months after the first, but thankfully it’s not a straightforward rehash. Tennant and Sheen are still connecting via their laptops, but as the first scene makes clear they’re now publicly taking credit for the success of a scripted show titled Staged. The first season is no longer a behind-the-scenes experience, but an actual production planned and broadcast. That sound you can hear is your meta-meter going off.

Should this about-face work? Probably not. Shifting the foundations of the series could easily diminish sympathies – the melancholy undertow that surged through the first season of Staged always had an authenticity that matched the times. But what wins out is giving a new perspective to the outlooks of Tennant and Sheen. The discombobulated Scot and thorny Welshman have had a win – which makes the next round of comeuppance and compromise all the more enjoyable.

It’s not long until the legendary Michael Palin is cheerfully eviscerating their work, beginning with their “self-congratulatory back and forth” and swiftly escalating to a misplaced reliance on improvisation and the fact that they’re, well, just not funny; you can see Tennant’s resolve unravel in mere seconds. Their outlook is only tested further when the news arrives that an American network wants to remake Staged, complete with the supporting cast, but not the two stars. They’re not famous enough in the States, which in these ego-stroked environs is a crushing blow.

In real life – or is that really real life – a lot of actors must have like Staged, because the famous names come thick and fast across the eight episodes of the new season. A few play roles, such as an on-the-money Whoopi Goldberg as a Hollywood agent, but most are versions of themselves. In the third episode fellow British actors Simon Pegg and Nick Frost do an online script reading in character as Tennant and Sheen, with the sidelined duo offering live feedback. It is mortifying, but also illustrative – Tennant and Sheen’s united front collapses as soon as Pegg and Frost admit they both want to play the now delighted Sheen because the character of Tennant is “tepid”.

The show’s creator, Simon Evans, continues to pay a bumbling version of himself, now ensconced in Los Angeles with the new production, but the sharpest insight continues to come from Tennant’s wife Georgia and Sheen’s partner Anna Lundberg, who have little time for the foibles of their lesser halves.

With the episodes clocking in at 22 minutes, each remains a delectable morsel of idiosyncratic exchanges and comic escalation, pivoting from one cringe worthy crisis to the next even as the same few rooms feature. Hopefully vaccines make a third season superfluous, but for now Staged remains welcome consolation.