Britain DID lockdown too late in March: UK’s coronavirus epidemic grew five times more than the European average between the first Covid death and the start of lockdown, study finds

Britain’s delayed response to the coronavirus in March saw the epidemic accelerate faster then some European nations that locked down earlier, a study has found.

A mathematical paper by Professor Christopher Dye of the University of Oxford looked at 30 nations and assessed their outbreaks based on Covid deaths.

In the data, the researchers found the average time for European countries to go into lockdown following the first reported Coivid-19 death was nine days.

During this period of time, the epidemic generally swelled by a factor of ten, they say.

However, different countries locked down at different times, with Poland starting its nationwide restrictions on March 10 – even before the first death was registered on March 12.

Based on data from the European Centre for Disease Prevention and Control (ECDC), the researchers calculate the first Covid-19 death in the UK occurred on March 7.

However, it was not until 16 days later, March 23, that Boris Johnson told the nation a strict lockdown was being introduced.

On that day there were 57 deaths – a more than 50-fold increase in the size of the epidemic since the first death, the experts told MailOnline. 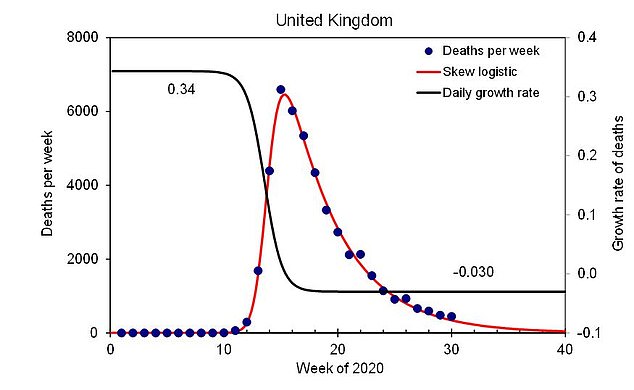 Pictured, a graph from the mathematical model showing the number of UK deaths per week (blue dots) throughout 2020, the results of the analysis (red line) and the amount the virus was growing every day (black line). It shows the impact lockdown had on reducing Covid deaths

‘We find that countries reporting fewer deaths did not generally have intrinsically lower rates of transmission and epidemic growth, and flatter epidemic curves,’ the researchers write in their study, published in Royal Society Open Science.

‘Rather, countries with fewer deaths locked down earlier, had shorter epidemics that peaked sooner and smaller populations.

‘Consequently, as lockdowns were eased, we expected, and duly observed, a resurgence of Covid-19 across Europe.’

The researchers looked at three potential explanations for why a country would have a smaller outbreak relative to its population than another.

The first is that the transmission rate of the coronavirus, SARS CoV-2, is intrinsically lower in some countries, for example, because infectious and susceptible individuals come into contact less frequently in less dense populations.

The second is that the number of new infections dropped quickly because after a steep rise in infections,  herd immunity built up among susceptible people.

‘Countries with fewer people exposed or susceptible to infection are expected to have smaller and shorter Covid-19 epidemics,’ the researchers say.

The third possible reason for fewer deaths is that the R number dropped due to the enforcement of Covid protocols such as social distancing, wearing masks and travel restrictions.

The study concludes that it is the third possibility which had the most significant impact.

The study looked at 30 European countries and assessed their individual epidemics up until July 31, after the first wave but before the second bout of coronavirus struck.

On average, the epidemic grew by 28 per cent every day at the start of the pandemic, doubling in size every 2.5 days.

From the first death, it took an average of 37 days for an epidemic growth curve peak, the data reveals.

When it did eventually stop growing, it shrunk at a much slower rate than it ballooned, diminishing by just five per cent a day. As a result, it took a fortnight for an epidemic to halve.

‘The strong link between COVID19 deaths and the time of lockdown implies that only a small fraction of Europe’s population was exposed to infection in the first epidemic wave,’ the researchers say.

However, their outbreaks were brought to an end sooner. As a result, ‘shorter epidemics were smaller epidemics’, the researchers say.

‘We expect that further COVID-19 outbreaks will continue to threaten large numbers of susceptible people across Europe,’ the researchers write in their study, which was finished by September.

Since then, the grim prediction has come true, with a dire second wave claiming thousands of lives across the continent.

‘The apparent effectiveness of lockdowns, and the penalty for releasing them, underline the central dilemma facing European countries: how to maintain the beneficial effects of physical distancing without reinstating full lockdowns across the continent,’ they conclude.

The true scale of the coronavirus outbreak is vastly underestimated and more than five million Britons have already been infected, a mathematical study claims.

Researchers focused on nations with comparable medical care and populations that have similar age distributions and found, on average, the true number of people to have been infected was 6.2 times higher than the reported figure.

However, there was a huge amount of variation depending on country, with the UK among the worst for under-recording cases.

Only six per cent of true cases were detected, with the true number 16.4 times larger than the official figure.

But according to the study data, the true level of infection by the start of September was a staggering 5.48million Britons, approximately one twelfth of the population.

A political inability to establish a suitable testing network during the first wave and restrictions on who was eligible for a test meant millions of people were infected with Covid-19 but did not receive a formal diagnosis.