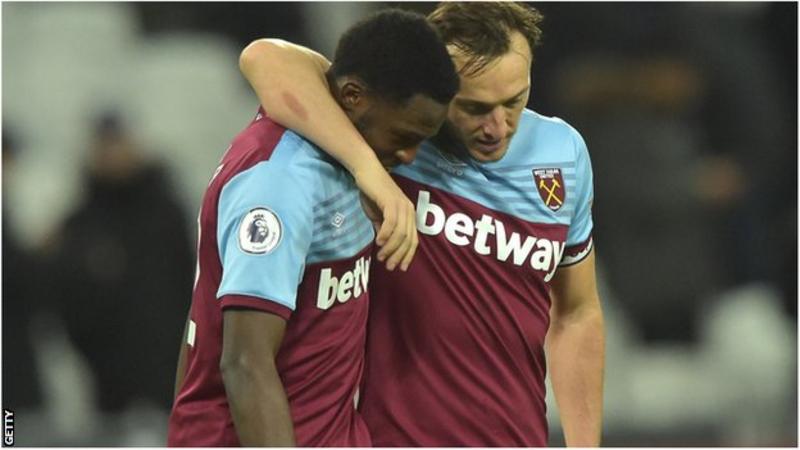 West Ham have become the second Premier League club to announce their players will defer part of their wages because of the coronavirus pandemic.

It follows a similar move from Southampton on Thursday.

Joint chairmen David Sullivan and David Gold and shareholders are putting £30m into the club.

West Ham say the payments will help retain jobs and allow them to pay 100% of non-playing staff salaries.

Premier League clubs previously said they would ask players to take a 30% pay cut in order to protect jobs.

However, the Professional Footballers’ Association said that would hit tax contributions to the NHS.

Earlier this week, Premier League players launched the #PlayersTogether scheme to generate and distribute funds to the NHS.

In a statement, Brady said: “I would like to say a big thank you to David Moyes and his backroom team, our captain Mark Noble and our fantastic squad of players for the commitment and determination they have shown to offer their help and support.

‘’I would also like to thank the shareholders whose support through this injection of equity once again demonstrates their commitment to the future of the club.

“The joint-chairmen and I are truly proud of how they and everyone at the club has stepped up to play their part in this situation – we are in it together to support one another, our community and our club. That is the spirit of the West Ham United family.

“There is still a long and difficult road ahead but we remain committed to doing everything we can to support those most in need, and together we will come through it stronger.”

Noble added: “As players we have been in constant dialogue with the club since the situation around Covid-19 emerged and I am proud that our entire squad have made clear their strong desire to play our part in helping to support others through this situation.”