Some corals emit a ‘sunscreen’ in the form of a dazzling colourful display in a ‘fight for survival’ against rising sea temperatures, according to new research.

But some bleaching corals undergo what had been described as a mysterious transformation by emitting bright neon colours.

UK scientists say internal light levels as a result of the bleaching triggers the production of colourful, ‘photoprotective’ pigments.

This funky display, captured on video by underwater drones, is a way of encouraging the algae, which provide coral with a crucial energy source, to return. 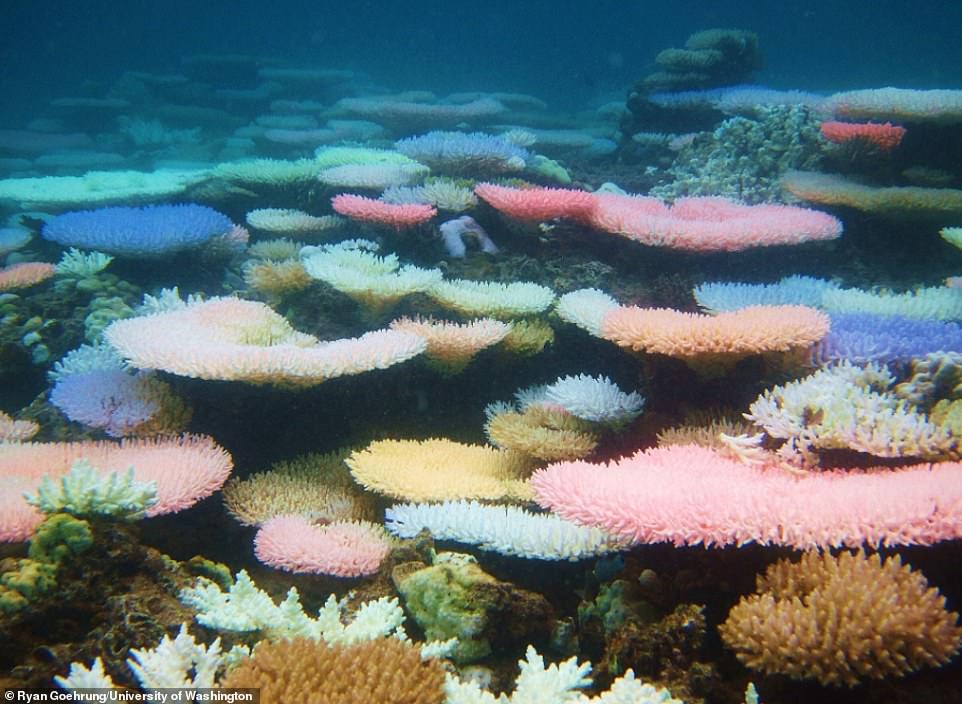 Coral of the acropora genus undergoing a stunning multi-coloured bleaching event in the Philippines in 2010. Despite the attractive display, the coral are actually undergoing a fight for survival

Bleached corals are not dead, but are at a higher risk of dying, and these bleaching events become more common under climate change.

‘Bleaching is not always a death sentence for corals, the coral animal can still be alive,’ said Dr Cecilia D’Angelo, lecturer of molecular coral biology at the University of Southampton.

‘If the stress event is mild enough, corals can re-establish the symbiosis with their algal partner.

The relationship between coral and the tiny algae embedded in coral cells is a mutually beneficial ‘symbiosis’, the researchers said. 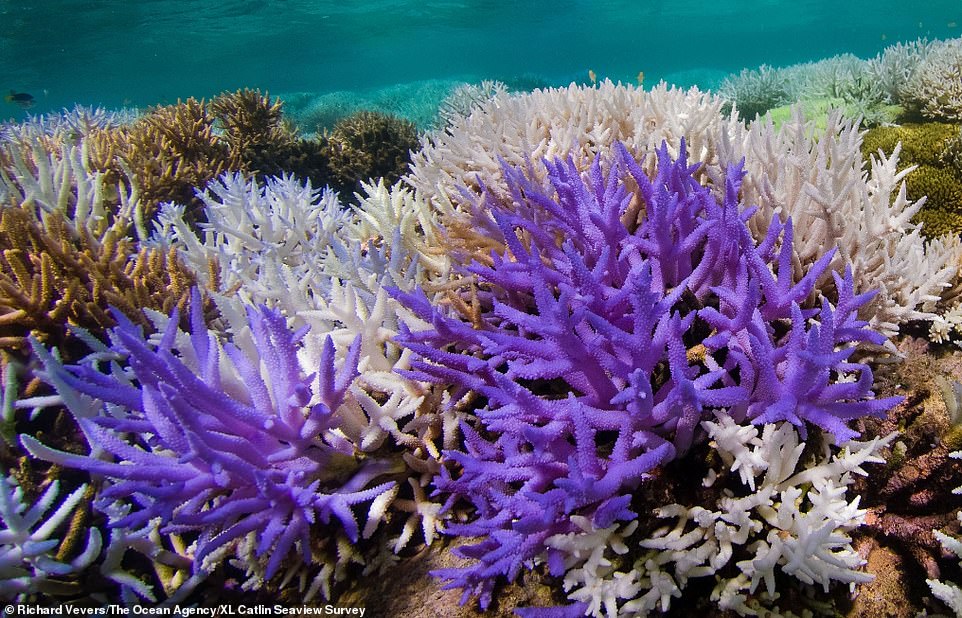 Purple coral reefs of the acropora genus as seen in the waters of New Caledonia in 2016. Bleaching is not always a death sentence for corals and the emission of colour can be a sign it is fighting to stay alive

The algae gain shelter, carbon dioxide and nutrients, while the corals receive the products from the algae’s photosynthesis, providing them with up to 90 per cent of their energy.

However, if ocean temperatures rise just 0.8°F (1°C) above the usual summer maximum, this symbiosis breaks down.

Warmer waters stress corals, causing them to release algae that live inside them.

The coral’s white limestone skeleton shines through its transparent tissue to produce the effect known as coral bleaching, which can be fatal.

Once its live tissue is gone, the skeleton is exposed to the eroding forces of the environment.

Within a few years, an entire coral reef can break down and much of the biodiversity that depends on its complex structure is lost.

But one effect of this that had puzzled scientists was the emission of bright colours –blue, pink, green, purple and more, to form an incredible rainbow reef. 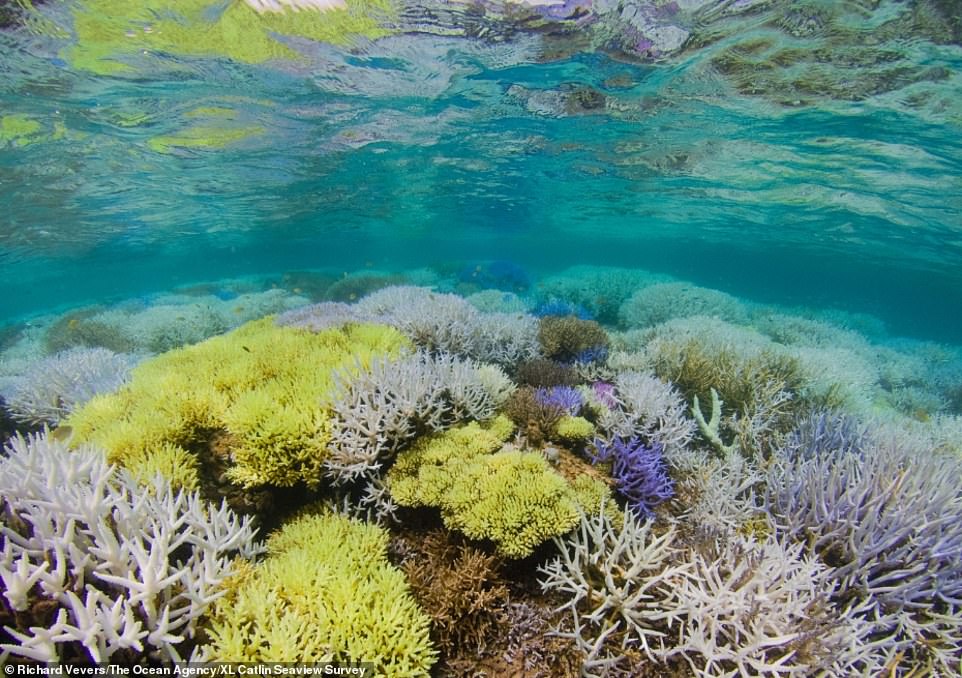 Colourful coral reefs of the acropora genus as seen in the waters of New Caledonia in 2016. During colourful bleaching events, corals produce what is effectively a sunscreen layer of their own, showing itself as a colourful display

To learn more, the researchers conducted a series of controlled laboratory experiments at the coral aquarium facility of the University of Southampton.

During colourful bleaching events, corals produce what is effectively a sunscreen layer in the form of a colourful display that relies on special pigments, they report.

These pigments offer an alternative to the glare of white light during bleaching that can deter the algae from ever returning.

‘Our research shows colourful bleaching involves a self-regulating mechanism, a so-called optical feedback loop, which involves both partners of the symbiosis,’ said Professor Jörg Wiedenmann, head of the University of Southampton’s Coral Reef Laboratory, which replicates colonies of corals for experiments.

‘In healthy corals, much of the sunlight is taken up by the photosynthetic pigments of the algal symbionts.

‘When corals lose their symbionts, the excess light travels back and forth inside the animal tissue – reflected by the white coral skeleton. 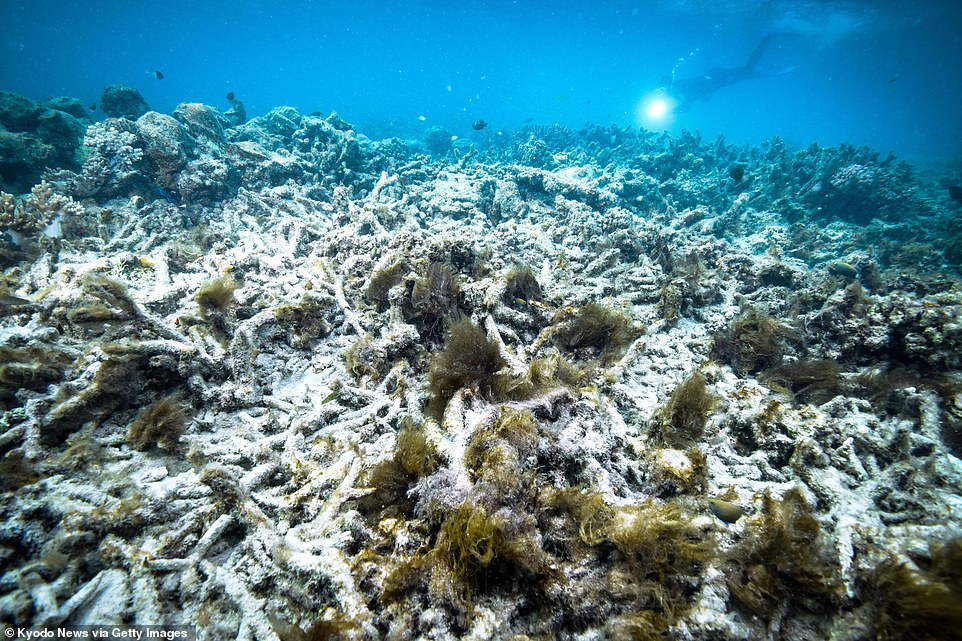 File photo taken in October 2016 shows coral bleaching without the colourful effect at the Great Barrier Reef in Australia, a World Heritage Site

‘This increased internal light level is very stressful for the symbionts and may delay or even prevent their return after conditions return to normal.

‘However, if the coral cells can still carry out at least some of their normal functions, despite the environmental stress that caused bleaching, the increased internal light levels will boost the production of colourful, photoprotective pigments.

‘The resulting sunscreen layer will subsequently promote the return of the symbionts.’

Once returned, the algae starts using the light for photosynthesis, light levels inside the coral drop and the coral cells lower the production of the colourful pigments.

The researchers believe corals that undergo this process are likely to have experienced episodes of mild or brief ocean-warming or disturbances in their nutrient environment – rather than extreme events.

The University of Southampton’s Coral Reef Aquarium Facility, which is on its Waterfront Campus. The Coral Reef Laboratory consist of a coral nursery facility that replicates colonies of corals for experimental purposes and an experimental aquarium facility for long-term experiments with reef building corals

The scientists are encouraged by recent reports suggesting colourful bleaching has occurred in some areas of the Great Barrier Reef during the most recent mass bleaching there in March to April this year.

This raises the hope that at least some patches of the world’s largest reef system may have better recovery prospects than others.

However, only a big reduction of greenhouse gases at a global scale and sustained improvement in water quality at a regional level can save coral reefs beyond the 21st century, they warn.

The research has been published in Current Biology.

Corals have a symbiotic relationship with a tiny marine algae called ‘zooxanthellae’ that live inside and nourish them.

When sea surface temperatures rise, corals expel the colourful algae. The loss of the algae causes them to bleach and turn white.

This bleached states can last for up to six weeks, and while corals can recover if the temperature drops and the algae return, severely bleached corals die, and become covered by algae.

In either case, this makes it hard to distinguish between healthy corals and dead corals from satellite images.

This bleaching recently killed up to 80 per cent of corals in some areas of the Great Barrier Reef.

Bleaching events of this nature are happening worldwide four times more frequently than they used to.

An aerial view of Australia’s Great Barrier Reef. The corals of the Great Barrier Reef have undergone two successive bleaching events, in 2016 and earlier this year, raising experts’ concerns about the capacity for reefs to survive under global-warming