Costar Amy Seimetz also opens up about her equally-dynamic career.

In “The Secrets We Keep,” stars Chris Messina and Amy Seimetz once again prove there’s no box to put them in when it comes to their Hollywood resumes.

The thriller revolves around a WWII survivor living in America (Noomi Rapace) who kidnaps a neighbor (Joel Kinnaman) she believes is responsible for atrocious war crimes committed against her and her family. Whether he’s who she believes he is, is the question at the center of it all.

Messina plays the husband to Rapace’s character, while Seimetz is Kinnaman’s wife, concerned and confused by his disappearance. 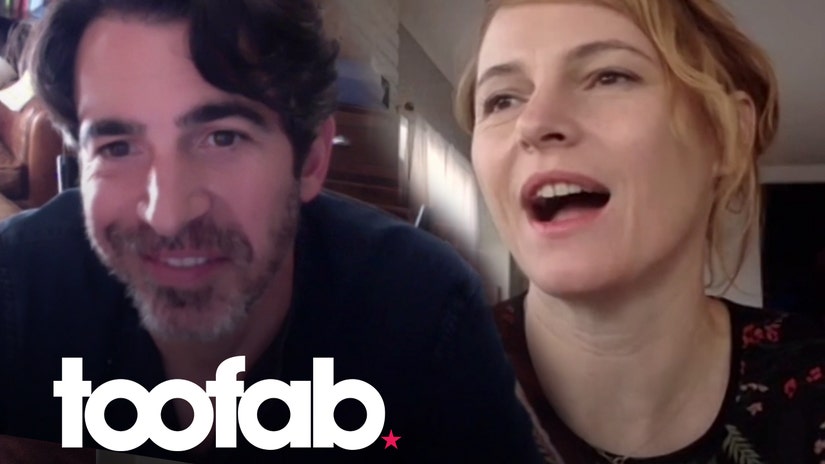 For Messina, the thriller comes after a beloved turn on “The Mindy Project,” a more sinister role on “The Sinner” and the blockbuster comic book film “Birds of Prey.” For Seimetz, her resume is even more varied, acting on “Get Shorty” TV series, having created/written/directed and appeared on “The Girlfriend Experience,” starring in the “Pet Sematary” remake and using her paycheck from that movie to self-finance her comedy-horror “She Dies Tomorrow” … in which Messina appears.

“As an actor you’re just, you kind of wait for these scripts to hurl through the universe and land on your lap and if you’re lucky, great ones do,” Messina told TooFab of his varied career when we caught up with him and Seimetz for a joint interview.

“You just kind of go where it’s calling you and where it makes sense,” he added. “I certainly don’t think about what would surprise people, it’s more along the lines of what scares the shit out of me, and usually I tend to lean towards that.”

“I think I just want to do things that interest me in so many different ways, whether that’s smaller and exercise myself in all capacities of not being afraid to do something larger,” added Seimetz.

“For me, it’s more about time — because I write, direct, produce, and act — that like giving myself over to something that I feel is using my time wisely as an artist as well as figuring out how I’m going to make my next movie independently,” she continued. “So for me it’s less about building a brand and more about what’s keeping me as an artist elastic in a way.”

Costar Noomi Rapace wore many hats while making “The Secrets We Keep.” In addition to starring in the film, she also serves as executive producer and was a real cheerleader behind getting the film made.

“I love her performances so much and she has so much like intelligence and fire and curiosity and precision in her choices,” said Seimetz, “but she’s also just ferocious and unafraid to go to like sort of the extremes, but can also bring it back to these very quiet, very precise moments that I think are really impressive.”

She added that the two “exchanged our Ridley Scott” stories, after they appeared in separate, back-to-back “Alien” prequel films.

“She’s ferocious, you know?” added Messina. “She’s a heavyweight fighter and being in the ring with her is a real honor and pleasure.”

“I watched her do cartwheels, summersaults, backflips in scenes and never complain about it,” he added.

“The Secrets We Keep” opens in theaters September 16 and hits VOD on October 16.