Childcare centres are not required to publish their fees on a website the government says is the key transparency measure for parents to understand if they're paying too much.

But work towards naming and shaming childcare centres that charge excessive fees has been put on ice with fees across the country frozen for much of the year because of the coronavirus pandemic. 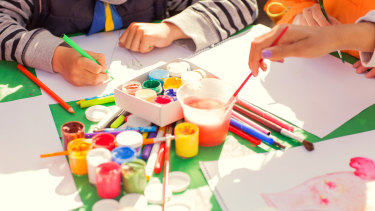 The government wrote to the 70 most expensive childcare centres in Australia asking them to explain their fees.Credit: Shutterstock

The Education Department wrote late last year to 70 childcare centres that charged the highest 10 per cent of fees to ask them to explain themselves.

Almost all responded, explaining that wages, insurance, hours of care offered each day, and rent were the biggest driver of their fees.

"It’s been a very important exercise in terms of ensuring that services know that we are aware of who are in the top fee paying areas, that this is an issue of concern to the government and to families," deputy secretary Ros Baxter told a Senate estimates hearing.

"But that specific piece of work that was about working with the sector on fees and looking at the next action which would be taken, including any public naming of high-fee charging services, was interrupted by the fact that in fact fees became free and then fee increases were frozen."

But she could not confirm all services listed their fees there.

"All services need to make their fee schedule transparent to families as part of their agreement with families," she said. "They are not compelled to include all of their fee data on Childcare Finder."

The government made childcare fee-free between April and July in a bid to save the sector from collapse when parents withdrew their children in droves as the pandemic and recession hit.

Once fees came back on, services had to keep them at pre-pandemic levels in order to receive extra support money from the government. Fees are still frozen in Victoria and were only allowed to lift elsewhere from late September.

Dr Baxter said this lengthy freeze meant officials had no sense of what would happen to fees over the next year.

The latest government data on fees, covering the March quarter, shows the nation's most expensive childcare centres are in Sydney's north shore and eastern suburbs and inner Melbourne.

Nationally, fees increased 4.4 per cent in the year to March while the hourly rate subsidies are based on rose by 1.8 per cent.

About one in seven services across the country charged fees above the hourly rate cap the government uses to benchmark subsidies. This rate has remained fairly steady over the past two years, officials said.