Just when you thought there was a dating app for every niche interest under the sun, along comes something totally unexpected: one that focuses on where the sun doesn’t shine. Cheek2Cheek, a new dating app for "fecal aficionados," was created, appropriately, by the modern bidet company TUSHY, and it helps you find your number one… with your number twos. After all, if there are two universal truths, it’s that we all need love, and everybody poops.

Niche dating apps are far from new, which is why Miki Agrawal, Founder of TUSHY, thought now was the perfect time to enter the market with Cheek2Cheek. “We’ve seen dating apps for Tesla owners, sea captains, bacon lovers, and more pop up recently. Considering how many people are now working from home because of the pandemic — and how much time they are spending in their bathrooms — we figured it would be a good time to announce ‘Cheek2Cheek,’ a dating app for fecal aficionados,” Agrawal said in a press release.

The app is set to launch in beta on Apple’s iOS and Google’s Android platforms in the coming months, and TUSHY’s goal, according to its press release, is to help “like-behindminded people” meet. Cheek2Cheek will function similarly to other dating apps like Tinder and Bumble, in that it will use similar general criteria such as age, gender, and location to help facilitate matches. But here’s where Cheek2Cheek differs from its competitors: the app will also allow users to add information about their bowel movements, bathroom habits, and any relevant deets about their gut and butt health.

Users can also add profile photos to their bios including — you guessed it — poop pics. “[That way] you can also find someone with the same sized/shaped poops as you, bathroom etiquette as you, or just someone experiencing similar gut/butt health issues. We’re excited for everyone to showcase their true poo-sonality and meet like-behindminded people,” said Agrawal. 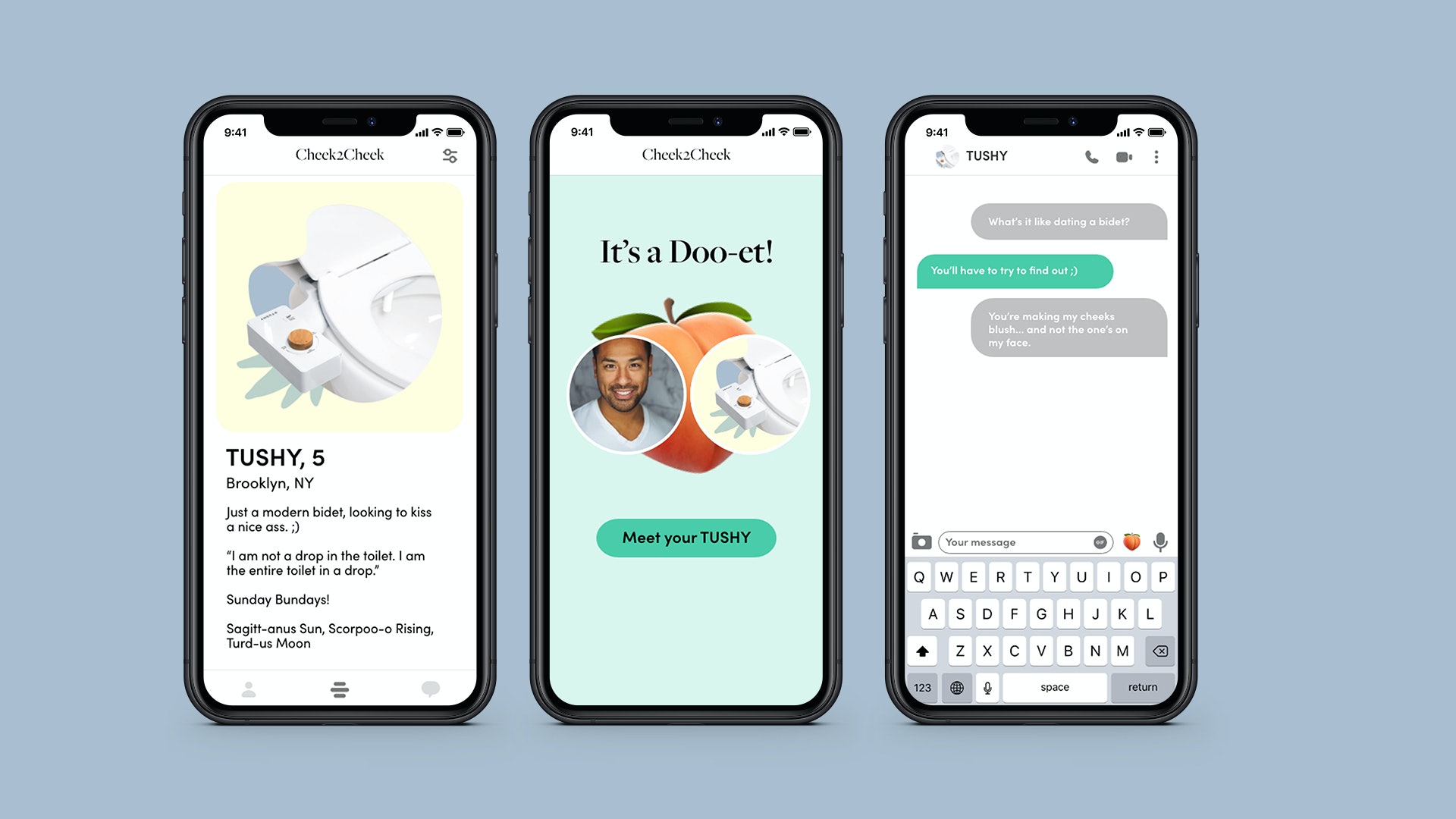 You might be thinking that budding love and poop don’t typically go together, but TUSHY is so confident in their dating app’s romance potential that it’s offering to pay for any couple’s wedding (up to $20,000) if their love story begins on the app.

Agrawal also sees the app as a very effective way to get the awkwardness around pooping that most new couples experience out of the way right from the start. “People’s bathroom habits and comfort levels of pooping in front of a partner can be very divisive for a relationship and this app can help hash out those issues once and for all. With Cheek2Cheek you will be able to meet someone with a similar comfortability level about pooping as you,” he said. Hey, it’s important to find someone you share things in common with, right?

Whether or not this unique take on a dating app is up your alley (literally), one thing’s certain: Cheek2Cheek really adds a whole new meaning to the concept of swiping for love.