Despite Thanksgiving inflation, U.S. turkey producer Butterball is letting consumers know there’s plenty to gobble up thanks to "no shortages" within their operations.

"We expect that everyone who wants a turkey will get one this year," Butterball president and CEO Jay Jandrain said on "Cavuto: Coast to Coast" Monday. "We've shipped, actually, more product this year than we did last year. And so far, what we're hearing from the retailers is that pull-through is good, there are no shortages and everybody should be able to get just exactly what they're looking for."

Jandrain’s comments come as The New York Post reports that some Americans plan on winging it this Thanksgiving, as turkey prices alone have risen up to 23% year-over-year.

"I’m going to buy cooked chicken that they usually have on sale for $5 or $7," 62-year-old Osvaldo Baez told The Post. Baez, who’s on a fixed income, said he’s "always" celebrated the holiday with a turkey.

But according to surveys performed by Butterball, 85% of respondents who are celebrating Thanksgiving this year plan on buying turkeys, the CEO noted. 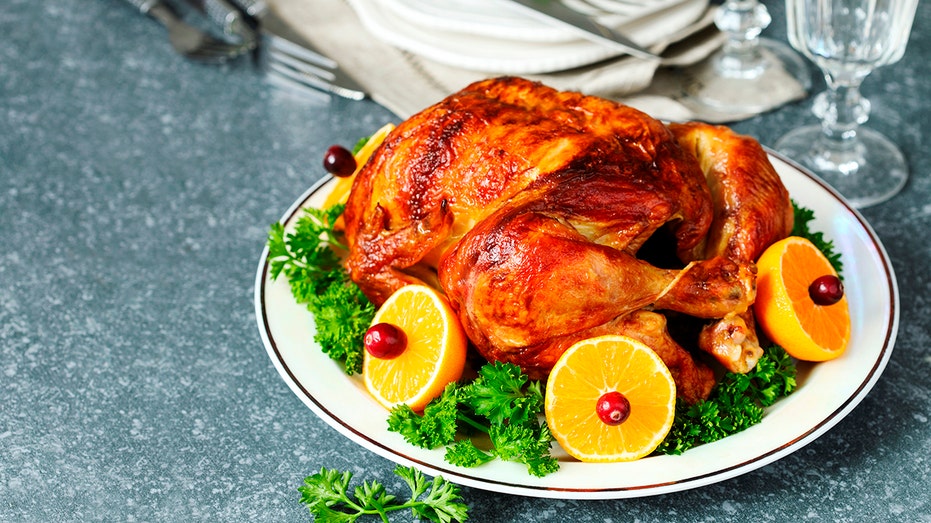 Butterball president and CEO Jay Jandrain said he’s “not seen any data at all” that suggests more Americans are switching to chicken for Thanksgiving with turkey prices too high, on “Cavuto: Coast to Coast” Monday, November 21, 2022. (Getty Images)

"I've not seen any data at all around the chicken substitution for turkey," Jandrain said. "So we certainly aren't expecting a change there. And we know that we're shipping a lot of turkeys this year, more so than last year, actually, and some survey work that we've done here in stores recently shows very few of our turkeys left. So it looks like sell-through is good."

Earlier this month, economists signaled that it may be more affordable for Americans to eat out on Thanksgiving this year, rather than cooking at home, in a Wells Fargo report.

Turkey prices alone are projected to rise as high as 23% compared to the fourth quarter last year. Meantime, the price of eggs, which were also been impacted by the bird flu, have already risen 32.5% while butter and flour have risen 25.8% and 17.1%, respectively, according to the analysts – which used the August CPI data to show the increase in cost since November 2021.

Butterball’s CEO admitted the company has been actively facing inflation pressures, but that operations "bear the brunt of" rising costs – not consumers. 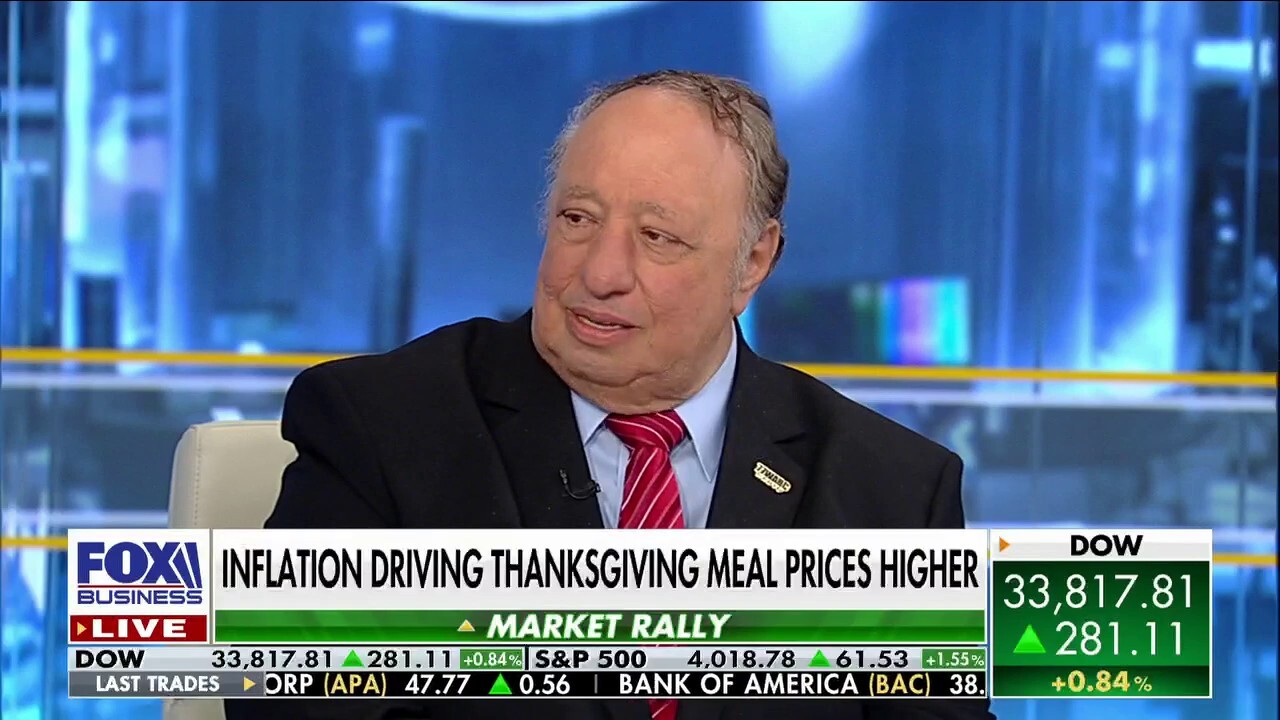 Get ready for ‘the highest prices ever’ this Thanksgiving: John Catsimatidis

John Catsimatidis, CEO of Gristedes Foods and the United Refining Company, discusses inflation, the Fed and the 2024 presidential election.

"The way that our operation is set up, we provide the feed to our farmers who grow turkeys for us. So we know all too well how expensive that is, and what the impact of that is into the cost of the product," Jandrain said.

The CEO also predicted transportation and diesel costs to increase through next year, which creates a "challenge" with shipping and distribution.

"Our transportation and warehousing cost has gone up this year, and that is something as we look to next year as well, we don't see that going away anytime soon," Jandrain pointed out. "We've got a number of very smart people in our group working to try to minimize the impact of that, on how we manage our freight and our distribution. They're doing a lot to work with our customers to make sure that we can minimize that and really just take costs out of the supply chain altogether."

However, fluctuating oil prices could cause drivers to pay significantly more this holiday season than they did last year. Gas prices are 36 cents higher than a year ago, according to GasBuddy.

"With oil prices remaining volatile, the outlook is murky, but I'm hopeful in the lead up to Thanksgiving we'll see prices declining in more states, while others may not be quite as lucky," Patrick De Haan, head of petroleum analysis at GasBuddy, said. "Regardless, we'll still be seeing the most expensive Thanksgiving Day prices on record." 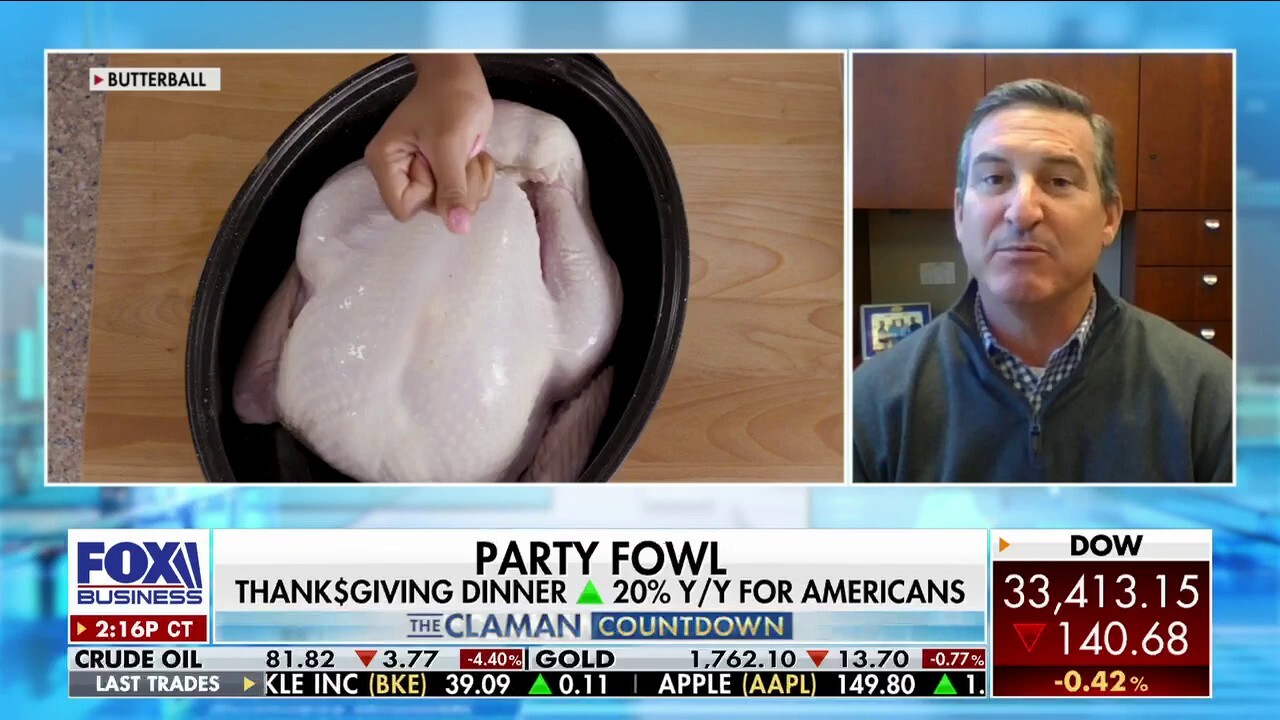 Butterball president and CEO Jay Jandrain discusses how skyrocketing food costs and the resurgent bird flu is impacting Thanksgiving on ‘The Claman Countdown.’

Butterball’s Jandrain noted there’s no "outstanding" legislation he could define that would better support turkey production and lower prices.

"There's nothing really outstanding that says, ‘Boy, if we got rid of this regulation to make things a whole lot easier,’" the CEO said. "Some oversight is good. We're going to work within what we've got and make sure that we follow the rules of the game and provide a safe, wholesome product to all of our consumers."