Frances Morris believes the art we’re taught in classrooms tells only one type of story. The director of London's Tate Modern says that looking beyond the obvious can reveal multiple truths. When Morris first started work in the art world, she realised the history she’d learned didn’t reflect the richness of reality. It's a realisation that has shaped her trajectory ever since.

“My first job was at the Arnolfini Gallery in Bristol and it was quite a radical space,” she says. “I remember an early visit to the studio of the late Helen Chadwick, who was a feminist champion of [women] in art history. I realised that the history that I’d been taught was the dominant version, located in a particular culture and power structure and that there was a world outside it that was really interesting and vital and relevant.” 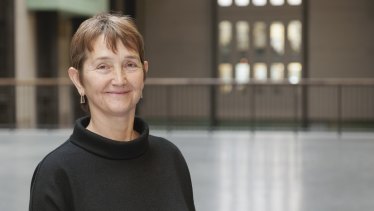 After studying art history at Cambridge University, Morris joined Tate Modern as a curator in 1987. In 2016, she became the institution’s first female director and has since championed the work of female artists, mounting retrospectives of Louise Bourgeois, Yayoi Kusama and Agnes Martin that have helped make these women part of the canon. But she isn’t interested in representation alone.

From next week, Morris will appear as part of Women’s Work: Textiles and Female Voices, a recorded in-conversation with Dr Gene Sherman. It’s among the highlights of the Sherman Centre for Culture and Ideas’ Fashion Hub, a virtual event that also features speakers such as author Vivian Bi and social entrepreneur Danielle Chiel.

While the history of modern art has been dominated by dated myths about great male painters, the talk will reflect Morris’s interest in alternative narratives centering on female artists.

Artists such as Sophie Taeuber-Arp and Anni Albers, she says, worked in the shadow of their more famous husbands. They also pre-empted the multidisciplinary style of working embraced by the present-day art world.

“Most of them had a much more open approach to working across sectors, they often made commercial work as well as their studio practice,” she says. “Now, artists often work across different forms and we value this. [I think] wow, there were women who anticipated this.”

She adds that women who worked with textiles, historically associated with the feminine and the domestic have not been given their rightful due.

“In Eastern Europe, a number of post-war female artists were [using fabric] to make astonishing work,” she says. “If you were an artist there in the fifties and sixties, you could only make figurative paintings with positive propaganda messages. So, if you were a creative person, what would you do? I’ve become really interested in a Romanian artist called Ana Lupas. We are also working on an exhibition of [Polish sculptor] Magdalena Abakanowicz. Even Agnes Martin, whose work is seen in the context of pure abstraction was profoundly influenced by her neighbour, the weaver Lenore Tawney. She would have never have got to the grid without her understanding of the warp and the weft.”

In the past year, the Australian art world has sparked its own conversations around gender parity. These include #KnowMyName, an initiative, led by the National Gallery of Australia, that draws attention to the legacy of the country’s female-identifying artists. For Morris, this is the perfect moment to question what we value – and what we want to put to rest.

“I think the one good thing that can come out of this coronavirus is an understanding of what we valued in the past and what we want to take forward into the future,” she says. “Some of these hierarchies, we really need to put away.”

Women’s Work: Textiles & Female Voices Director of Tate Modern, Frances Morris and Dr Gene Sherman AM In Conversation will screen online as part of the SCCI Fashion Hub from April 20.