Golf: What you need to know about the WGC-FedEx St. Jude Invitational

The WGC-FedEx St. Jude Invitational is the last tournament before the PGA Championship. Check out who has the most wins and other factors you should know about the event that replaced the World Series of Golf in 1999.

Bryson DeChambeau had an odd interaction with a PGA Tour official during the first round of the WGC-FedEx St. Jude Invitational in Tennessee on Thursday.

DeChambeau’s tee shot on the seventh hole was sent into the rough. When he went to inspect his ball, he saw that it was sitting near what he called a fire ant hill. He called over the rules official Ken Tackett to inspect the ball and tried to argue for a free drop under the “Dangerous Animal Condition” rule.

Tackett explained to DeChambeau that he didn’t see that the ants were the color of fire ants. He told the golfer: “Yeah, I don't see any fire ants in a sense that it would be, you know, a dangerous situation.”

DeChambeau then argued that there were two animal-burrowing holes behind his ball.

“Anything right there?” he asked. “What is this thing? There's two of them.”

Tackett was unconvinced while DeChambeau appeared to notice a “red ant” coming out of the hill. Tackett said it wasn’t interfering with DeChambeau’s stance. The golfer finished the hole with a double bogey.

DeChambeau explained what he was trying to do after his round. He didn’t think Tackett was making the wrong call.

“That was weird,” he said, according to Sky Sports. “So there was discolored dirt and I saw a couple of red ants there and I was thinking, hmm, anthill, I may get something or I might not.

“I asked him and he was like, 'well, it's got to be, you know, kind of endangering you.’ And it was just an anthill, so there was just a discussion there and he didn't think it was necessary for a drop. 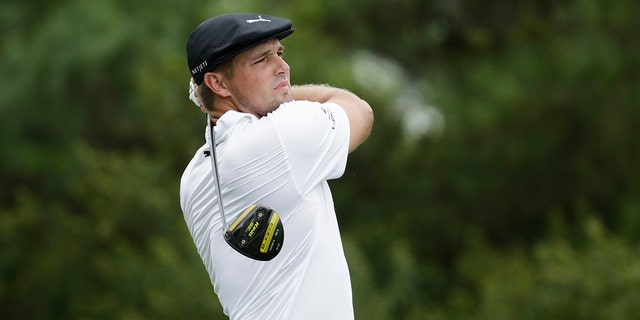 Bryson DeChambeau watches his tee shot on the 17th hole during the first round of the World Golf Championship-FedEx St. Jude Invitational Thursday, July 30, 2020, in Memphis, Tenn. (AP Photo/Mark Humphrey)

“So I'm always going to respect the officials and go, 'OK, no issue, that's fine'. It didn't help that I had a really, really bad lie, too, with two twigs lodged in between my ball. Is what it is.”

DeChambeau finished tied for ninth after the first round with a 3-under par.