While recording his critically acclaimed 1978 album Darkness on the Edge of Town, Bruce Springsteen used the power and passion of the E Street Band to lay songs down live in the studio.

It’s a technique Springsteen has used sparingly over nearly five decades and 19 albums, but one he embraced for the recording of his new album Letter To You. 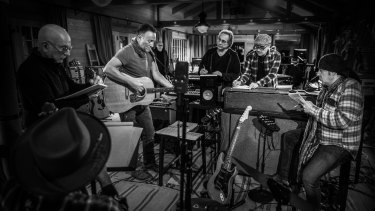 Bruce Springsteen shows the E Street Band a new song during the recording of Letter To You.Credit:Betsy Whitney

Springsteen’s 20th studio album was recorded at his home studio in New Jersey. Eschewing a longtime practice to demo new songs, he instead recorded acoustic versions to his mobile phone then rolled out his ideas to guitarists Steve Van Zandt, Nils Lofgren, drummer Max Weinberg, bass player Garry Tallent and keyboardist Roy Bittan in the studio.

Springsteen’s wife, guitarist and vocalist Patti Scialfa, heard the songs in their embryonic stage, otherwise the band, including saxophonist Jake Clemons, came to the five-day recording of Letter To You with nothing but enthusiasm for their first recording project together in six years. 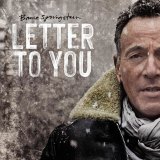 Bruce Springsteen is back with his 20th studio album.Credit:

Leading the album is the contemplative One Minute You’re Here, with its opening line – “Big black train coming down the track" – evidence of Springsteen's intention to address loss and his mortality. It quickly becomes clear the album is also a celebration of life, chasing your dreams, the joy of being in a band and the friendships he's forged over more than five decades in music.

The track One Minute You’re Here, as with many of the album’s 12 songs, draws upon Springsteen’s childhood recollections, of being a teenage guitarist in his first band, talismans he's collected, finding his way in the world and the death of friends along the way.

“The subject is the music itself and the world we’ve created with our fans,” he said. “It’s the first time I chose that as my subject. It’s about rock'n'roll, it’s about being in a band [and] encompasses me reflecting on my first band … and reflecting on the the E Street Band that I’ve been in now for 45 years.”

The title track cranks up several gears, while lyrically the song does what Springsteen has spent his entire career aiming to do – communicating and making connections through the power of song.

The subject is the music itself and the world we’ve created with our fans.

There is honesty, rawness and a sense of spirituality at the heart of Letter To You

Recorded last year, prior to COVID-19 lockdowns, Springsteen sings about “fears and doubts” and the “hard things I found out”. He’s long been a master of tapping into human emotions – reminding us we’re all in it together – and here the Boss is perhaps at his best. At 71, there’s no sign of him losing faith in the power of music or better times ahead.

Burnin’ Train is typical of so many Springsteen songs, packed with heartfelt lyrics and fuelled by his raspy voice. Weinberg’s drums chugging along up high in the mix, guitars wailing and Springsteen leading the crowd in an almighty sing-along. It would sparkle in a live setting,

There are also three tracks Springsteen wrote prior to the release of his 1973 debut album. Janey Needs A Shooter, If I Was the Priest and Song For Orphans all hark to a time when the Boss was first finding his voice.

Ghosts and I’ll See You in My Dreams bring to mind the glory days of 1984, the last time a Springsteen album was recorded live. On these tracks you feel the energy, passion and connection between band members when a shared moment in time is captured on tape.

“It’s still an incredible experience, the act of writing a song,” Springsteen said. On this new album, he’s brought the band along, almost every step of the way.

Letter To You is now available through Columbia Records/Sony Music.

BORN TO RUN (1975)
When was the last time you watched the film clip for this song, the one that’s been viewed almost 46 million times? If you’ve never seen Springsteen and the E Street Band in concert, check out the clip for Born To Run, from his 1975 album of the same name, and get a sense of what all the fuss is about.

DARKNESS ON THE EDGE OF TOWN (1978)
The closing song on his fourth album has all the hallmarks of a classic Springsteen track with the poetic, earnest intro, the crack of Max Weinberg's snare drum 30 seconds in and the band erupting like a volcano.

THUNDER ROAD (1975)
From his acclaimed 1975 album, which hit number three on the US Billboard 200 album chart. Ten years after joining his first band, Springsteen was just 25 when he recorded Thunder Road, a song that’s still a firm favourite among fans. It's the Boss firing on all cylinders, using lots of words to tell an epic story about cars, guitars, lovers and hot summer nights.

THE RIVER (1980)
Previous albums proved what he was capable of, but this confirmed Springsteen was among the best musicians and songwriters of his generation. The double album of the same name had 20 songs, but 50 were recorded, adding further weight to him perhaps being the hardest working musician of his generation.

THE GHOST OF TOM JOAD (1995)
The title track of his second acoustic album, which highlights the growing versatility of Springsteen’s voice. A great lyricist and genuine old school rock'n'roller, Springsteen has also shown himself to be uncompromising in his determination and a singer with a deep understanding of his subject matter.

I’M ON FIRE (1984)
Two-and-a-half minutes of the Boss at his moody best. Stripped back to just the barest of lyrics and instrumentation, I’m on Fire was based around a Johnny Cash-style rhythm and became the fourth of seven songs from Born in the U.S.A. that landed inside the top 10 singles chart.

HUNGRY HEART (1980)
One of those 20 tracks that made the cut on The River, Hungry Heart comes with Roy Bittan’s distinctive piano intro and became a top-five hit single. Springsteen originally wrote it for New York rock band the Ramones but was convinced by his producer Jon Landau to record the song himself.

LETTER TO YOU (2020)
Recorded live, Letter To You bristles with an energy the Boss himself described only weeks ago as “the greatest recording experience” he’s had in his entire career. His voice, like much loved leather boots, has travelled far and aged well, while the band is simply on fire on the album's title track.

BORN IN THE U.S.A (1984)
Another rare time Springsteen and the band recorded a track live in the studio. Although often associated with American patriotism, the song’s subject matter is more akin to Cold Chisel’s Khe Sanh and the alienation Vietnam veterans often felt upon returning home. It's a cracking song with close to a minute of intro that's recognisable from the very first note and whack on the snare drum.

ROSALITA (COME OUT TONIGHT) (1973)
From his second album The Wild, the Innocent and the E Street Shuffle, this track has been a live staple throughout Springsteen’s career, regularly played during his often four-hour long shows. “Now, I know your mama, she don’t like me, cause I play in a rock'n'roll band … hey hey hey.” Come on Bruce, how could anyone not like you?