Britain’s high commissioner to Australia says the world’s leading export nations can avoid potential carbon tariffs by lifting their level of climate ambition when they head to the United Nations climate summit in Glasgow in November.

Australia is pushing back against the widespread implementation of the mechanism, which has been flagged by British Prime Minister Boris Johnson as an option to address global inaction on emissions reduction by taxing products from countries with weaker climate laws. 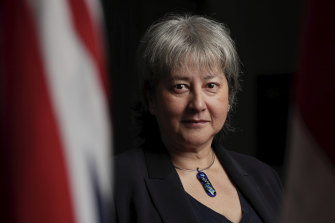 Other nations to have expressed concern include Brazil, China, Thailand, the Philippines, Pakistan and Saudi Arabia, which argue the measure could distort global value chains and would be primarily designed to stop investment leaving Europe.

Vicki Treadell, the United Kingdom’s top diplomat in Canberra, said on Thursday climate change remained the British government’s number one policy priority and it would top the agenda at the G7 summit in Cornwall, England this month.

In April, Mr Johnson committed to “the world’s most ambitious climate change target” of reducing emissions by 78 per cent by 2035. Ms Treadell said the UK would be pushing other nations to turn climate promises into action as host of both this month’s G7 and the UN’s COP26 climate summit later this year.

She said carbon tariffs were only one policy option and they would need agreement at an international level to be imposed.

“The real solution is for all nations to have a high level of ambition, not just for net zero by 2050,” Ms Treadell said. “The real argument now in the process is not the assurance that we will get to net zero by 2050, [it] is what people are doing on interim targets. We ourselves, we talked about international leadership, you have to walk the talk.”

“The PM had made this point,” she said. “That’s what we need to achieve.”

Mr Morrison, who will head to Cornwall late next week as a guest participant at the G7 leaders’ summit as well as a series of bilateral meetings, has previously said he wants Australia to “preferably” achieve net zero by 2050 but is yet to take any new policy to the Coalition party room.

Each member of the G7 – Canada, France, Germany, Italy, Japan, the UK and United States – have a goal of achieving net zero by 2050.

Mr Morrison told the Minerals Council of Australia parliamentary dinner in Canberra on Wednesday night he would adopt the “Frank Sinatra approach” on climate.

“We’re going to do it our way … the Australian way. If we can do it in the Pilbara, if we can do it there, we can do it anywhere, as Frank used to sing about New York,” he said. “We will make our path to net zero. But we will set it. We will not have it determined by others. We will do it in accordance with Australia’s national interest and the interests of Australian jobs.”

Mr Morrison will also hold a bilateral meeting with Mr Johnson where they are expected to progress a historic free-trade deal.

Ms Treadell said the two nations were working “at record speed” to have an in-principle agreement ready for Mr Johnson and Mr Morrison’s Downing Street meeting on June 15.

Under the deal being finalised, the UK is set to agree to zero-tariff, zero-quota access for Australian agricultural exports. In return, Australia will remove tariffs on products such as Scotch whisky and cars as well as giving greater access to British services companies.