Britain’s most expensive villages: The three priciest spots in each county revealed as more buyers hunt for the quiet life

The most expensive villages in each county of Britain have been revealed, with some areas seeing average house prices reaching more than £1million.

These spots contain the priciest average property prices during the past five years, according to exclusive data from estate agents Savills.

As transactions tend to be lower in these locations, it removed any areas where there were fewer than 20 sales during this period.

By doing this, it showed the villages where there is a better chance of homes becoming available to buy – something that will be welcome news to those seeking more space in rural locations.

Does your local village feature? Scroll to the bottom for the full list. 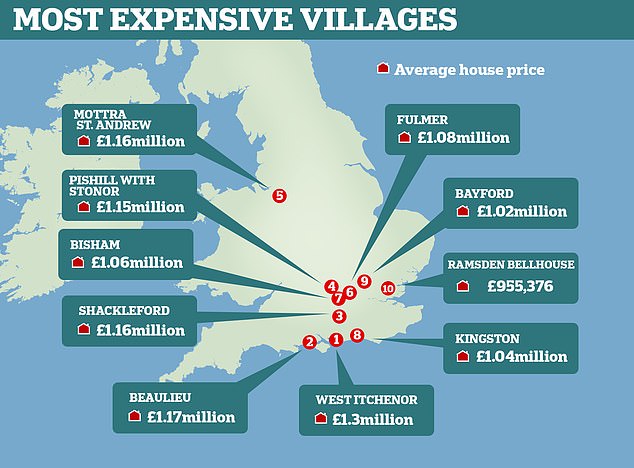 Pictured: The map shows the top 10 most expensive villages in different counties 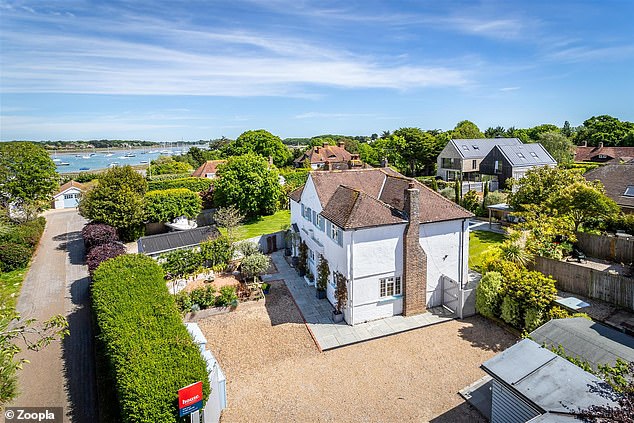 This four-bed house in Itchenor, Chichester, is for sale for £1.65m via House estate agents

While the data covers the five years up to the end of last year and does not cover the coronavirus pandemic, Savills insisted that the data was more relevant than ever as people seek to move to the countryside due to the lockdown.

The estate agent also argued that the figures are over a long period and there have been a low number of transactions, meaning average prices in these areas will not have changed much despite the pandemic.

The village with the most expensive average house prices that fulfilled the data’s criteria was West Itchenor in Chichester, West Sussex.

Savills said the average house price in the village – with its research based on Land Registry sales figures – is £1,336,763.

It means a home there is nearly five times more expensive than the average value of a home in Britain, which currently stands at £286,126, according to property website Zoopla.

West Itchenor in Chichester, West Sussex, is the village with the most expensive average house prices

Nine out of 10 of the most expensive villages identified by Savills have an average house price of more than £1million.

These include the village of Beaulieu, in the New Forest, in Hampshire, which is ranked second and has an average house price of £1,179,408.

It is followed in third place by Shackleford, in Guildford, Surrey, where average values stand at £1,166,236. 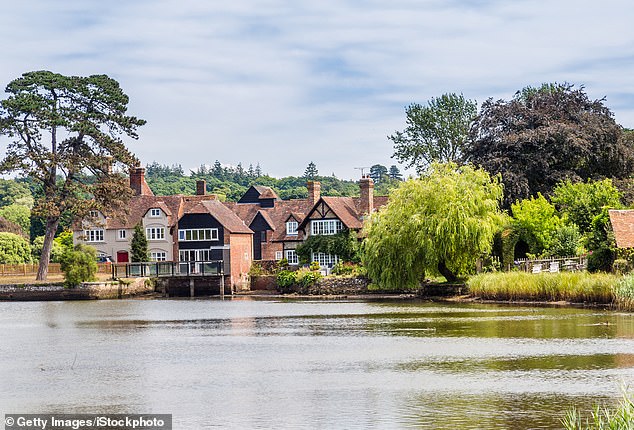 Pictured: The village of Beaulieu, in the New Forest, Hampshire, has the second highest average village house prices in the country 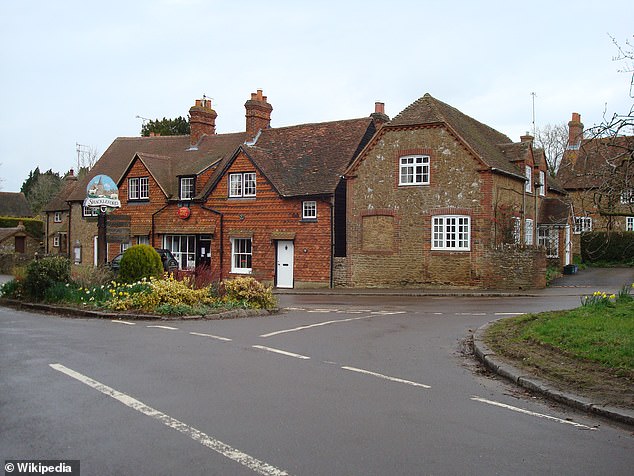 Pictured: The Post Office in Shackleford, in Guildford, Surrey – one of the most expensive villages in Britain

The top 10 locations also include Pishill with Stonor in Oxfordshire, Mottram St. Andrew in Cheshire and Fulmer in Buckinghamshire.

Ramsden Bellhouse in Essex is the only village in the top 10 without a seven-figure average house price.

The village is in the borough of Basildon and has an average house price of £955,376. 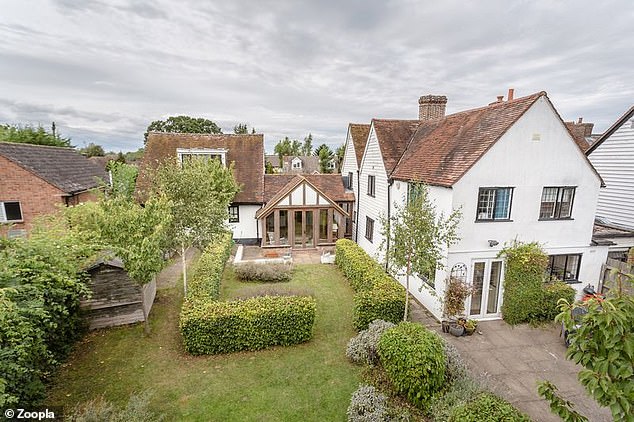 This four-bed house in Bayford, Hertfordshire, is for sale for £1,195,000 via Thomas Childs & Co estate agents

Some of these exclusive villages will have a some second homeowners, along with some full-time residents, it said.

But Savills pointed out that the tide is turning due to the virus, with people switching the location of their main home.

It said second homeowners who tended to have their main home in London are now using that as a pied-a-terre, with people wanting their main residence to be in the countryside. 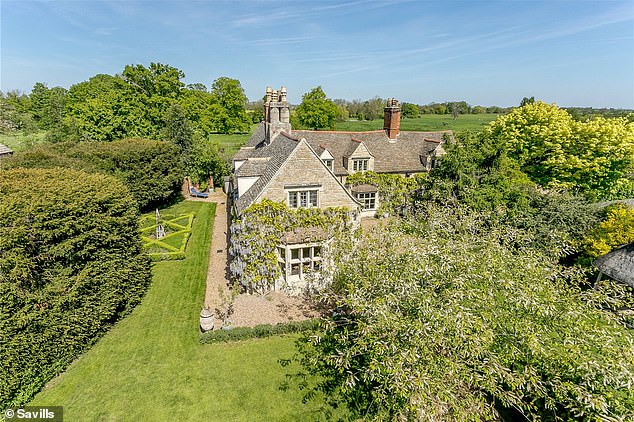 This five-bed house in Greatford, Lincolnshire, is for sale for £1,350,000 via estate agents Savills

Savills said the data revealed the villages that have a reputation as ‘best-in-class’, with people often upgrading within them leading to intense competition for new properties on the market.

It suggested that a village’s reputation often stems from its accessibility while being away from main roads, the quality of its housing stock and people clustering around that area due to its reputation.

It added that the three things to look out for when selecting a village to move to include the quality of the village school, pubs and parish shops, and housing stock. 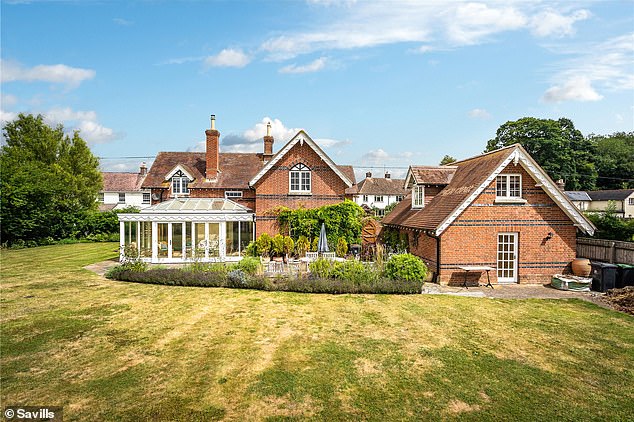 This five-bed house in Witchampton, Dorset, has a guide price of £995,000 and is now under offer via estate agents Savills

Lindsay Cuthill, head of the country house team at Savills, said: ‘Villages have always had a special place in the national psyche, epitomising an age-old sense of community.

‘Offering rural charm without being remote, as well as the bonus of relative value for money and greater space compared to more urban areas, villages are an appealing prospect.

‘We expect well-connected locations, that allow those who can to split their time between working from home and going into the office, will prove to be especially popular.

‘It will be fascinating to see how many lockdown dreams of a lifestyle change become reality in more normal times.’