Drawing up the guest list for a wedding is often a stressful experinece, but one bride had it worst than most when it came to accomodating the men in her family’s very complicated love lives.

The unnamed bride, 27, believed to be from the UK, turned to Reddit’s Am I The A****** forum for advice, after an argument with her father who wants to bring his three girlfriends on the big day, while two uncles also hope to bring two guests each.

She said that polyamory was normalized in the family growing up, and that her grandfather had two women he called his ‘wife’ as well as a girlfriend.

In the post which has resurfaced on Facebook’s That It, I’m Wedding Shaming (non-ban happy edition), she revealed that her father – who is divorced from her mother – has accused her of ‘discrimination’ for not allowing his multiple partners to attend.

Commenters were quick to side with the bride and said that she doesn’t have to invite plus ones full stop, let alone three she’s never met – with some claiming the men in her family sound like they’re in a ‘cult’. 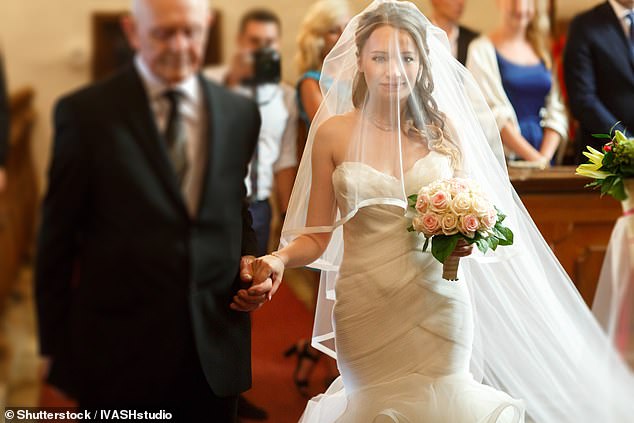 The bride explained her grandfather, father and uncles all had had several partners at the same time throughout her life in what she described as ‘a very normalized ‘multiple wife/girlfriend’ way of life.’

She claimed that there was no religious aspect to it, saying: ‘Tiny bit of Mormonism from my grandfather’s generation but not followed by my dad or uncles and no other religious involvement.’

The bride then revealed that her grandfather had two women he called wives, as well as a girlfriend, in addition to her grandmother.

After the grandfather died, her grandmother admitted to the family she never agreed with her late husband having several mistresses.

She added the grandmother said she ‘had been trapped’ after falling pregnant ‘too young’ and was ‘forced’ to get married. 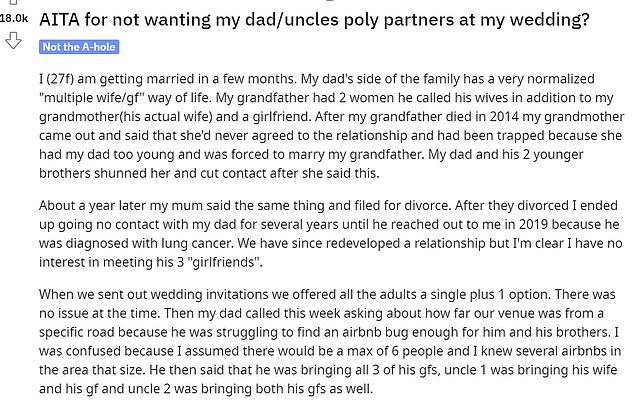 The bride’s father and two uncles shunned their mother after her confession.

She went on to reveal that her own parents had divorced after her mother said she felt the same way about her husband’s polyamorous affairs.

‘After they divorced I ended up going no contact with my dad for several years until he reached out to me in 2019 because he was diagnosed with lung cancer,’ the bride explained.

She added that since 2019, she had rebuilt her relationship with her father, but had made it clear she didn’t want to meet her father’s three girlfriends.

However, he assumed that he’d be able to bring them to the wedding – as did her uncles and their multiple partners – and was not happy to be told otherwise. 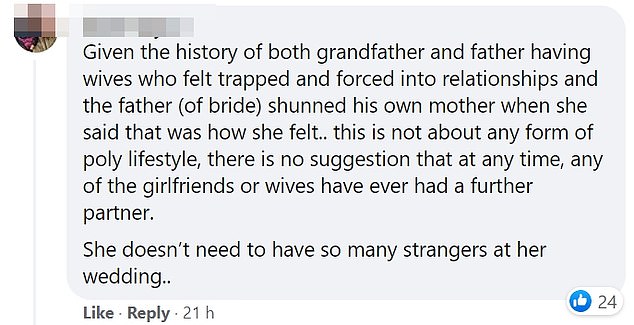 People online said the bride had every right to refuse extra guests, and that it sounded like her father had a toxic relationship with polyamory

The bride-to-be said she reminded her father of her guest rule, saying ‘I wasn’t going to pay for four extra women I’d never met to drink and eat at my wedding.’

However, her father reasoned that because his ex-wife was bringing her new husband and her two children, and assumed he would get three guests too.

‘I said two children who I’m very close to and one of whom is my flower girl, were completely different to four extra random women,’ she said.

He then flipped his s*** and accused me of discriminating against his lifestyle and siding with mum and holding a grudge about their divorce.

People completely sided with the bride online, and many said he didn’t sound like the father had completely ethically and consensual relationships. 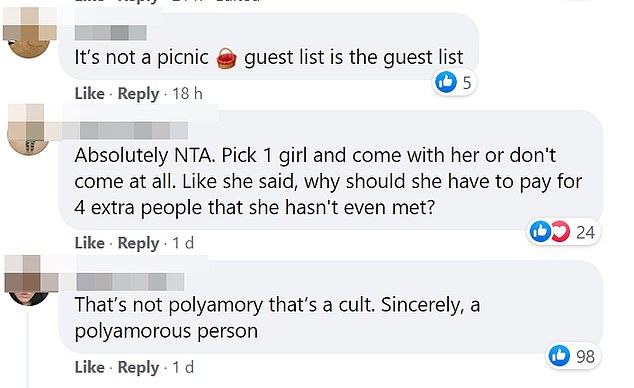 A polyamorous relationship is both when the two partners are free to frequent other people. The bride later revealed that in the case of her father, he was the only partner in the relationship seeing other peole.

Some people said the father sounded like he was a member of a cult that allowed polygamy.

‘Pick one girl and come with her or don’t come at all. Like she said, why should she have to pay for four extra people that she hasn’t even met,’ another commented.

‘Did he just try to pass that his girlfriends are the equivalent of an infant and a small child? I’m not sure who should be the most offended by his comparison,’ one joked.

‘That’s not polyamory that’s a cult. Sincerely, a polyamorous person,’ another wrote.

‘That’s a cult and you can’t change my mind,’ one said.

‘Wtf?? You’re under no obligation to even have plus ones if you don’t want to never mind a plus three,’ one wrote.

‘Well they’re not ethically nonmonogamous that’s for sure,’ said one.

‘I don’t really think Id want any of them there, cutting you off and then only getting in contact when he thought he was dying,’ another said.

‘With his attitude I KNOW it will be a clusterf*** oh and I’d tell him step siblings don’t count as ‘plus’ guests, they are invited period. F*** him and the crowd he is riding in with,’ said another.