Ministerial mansion: Birthplace of former PM Lord Palmerston with rooftop views of the capital and direct access to St James’s Park is for sale at £15m

While it is not quite 10 Downing Street, prospective buyers with deep pockets can own a slice of political history as a London home that was the birthplace of former Prime Minister, Lord Palmerston, is now on the market.

The six bedroom home is located in Queen Anne’s Gate, overlooking St James’s Park, an area regarded as one of the best-preserved areas of eighteenth century domestic architecture in London.

Currently listed at £14.85million by estate agent Savills, the Grade I listed property, that dates back between 1775 and 1778, is distinguished by a blue plaque marking it as the birth place of Lord Palmerston. 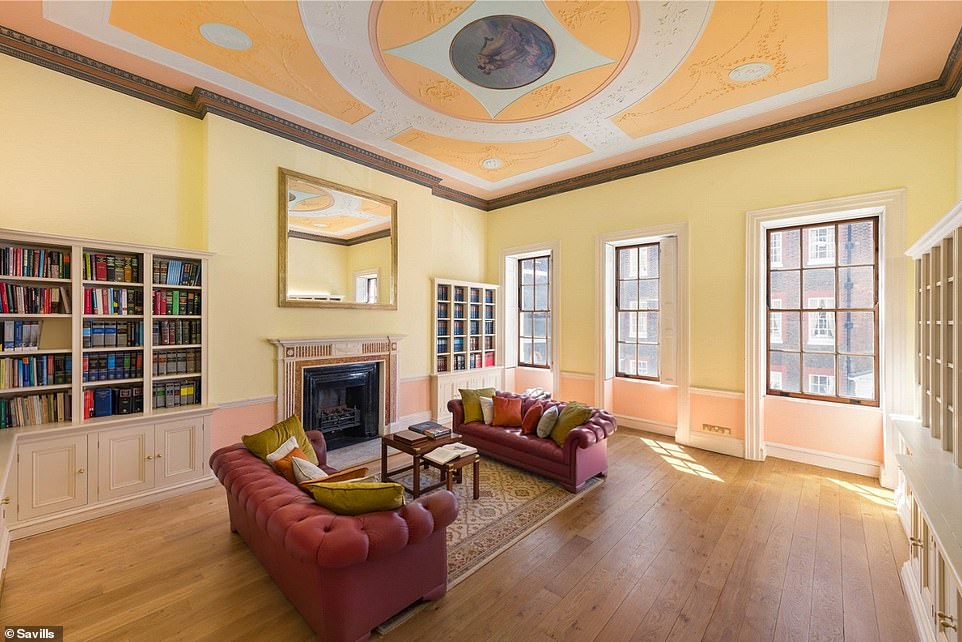 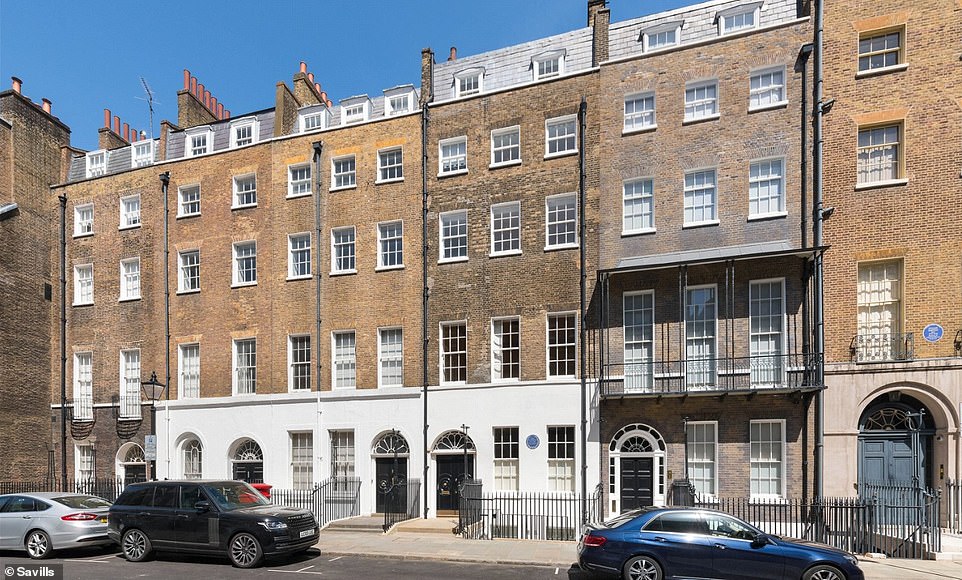 The Grade I listed property has a blue plaque marking it as the birth place of Lord Palmerston, a former Prime Minister

Located in the heart of London, the property is situated directly parallel to the Birdcage Walk and St James’s Park, close to world renowned and iconic landmarks such as the Houses of Parliament, Westminster Abbey, and Buckingham Palace.

It is also just a short walk away from Big Ben, St James’ Palace and the River Thames.

Restored as a family home in 2000 to 2003, the house also boasts many significant, historical architectural features including ceiling paintings in the drawing room and library by renowned Swiss painter Angelica Kauffman.

Kauffman is well known for being one of the two female founders of the Royal Academy of Arts in London in 1768.

Other stand out features of the house include carved fireplaces of marble and Sicilian jasper, a central sandstone staircase with iron balustrading and a delicate mahogany rail with cupola above.

A wine cellar and further under pavement storage vaults is also situated in the home. 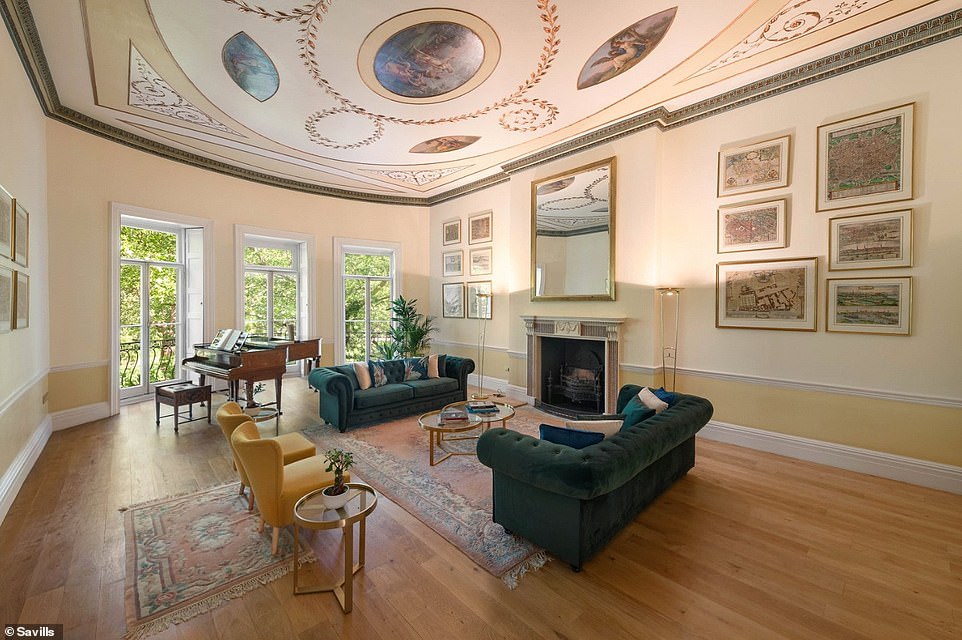 The drawing room has paintings on the ceilings by Angelica Kauffman, one of the female founders of the Royal Academy 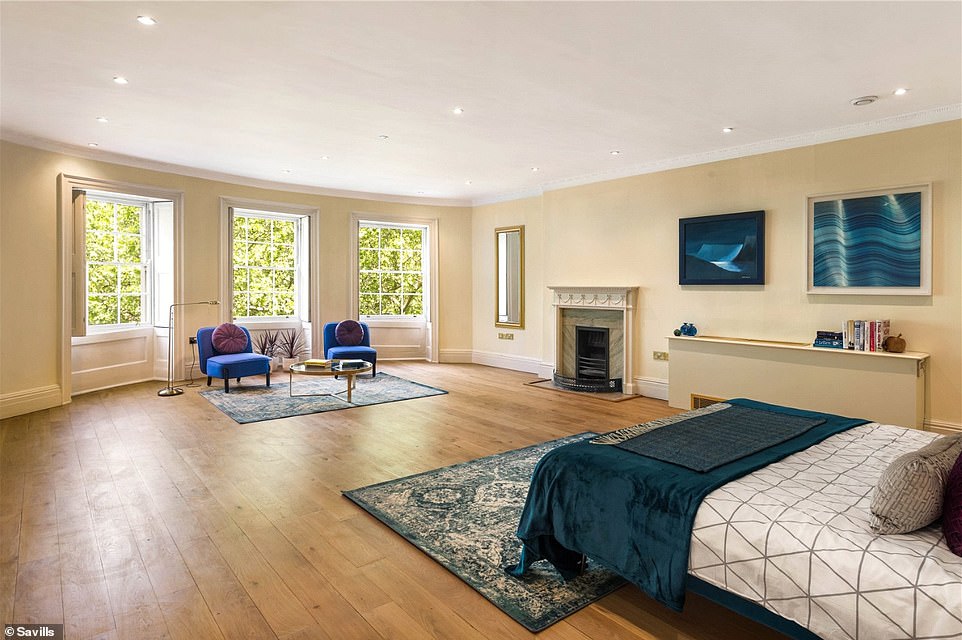 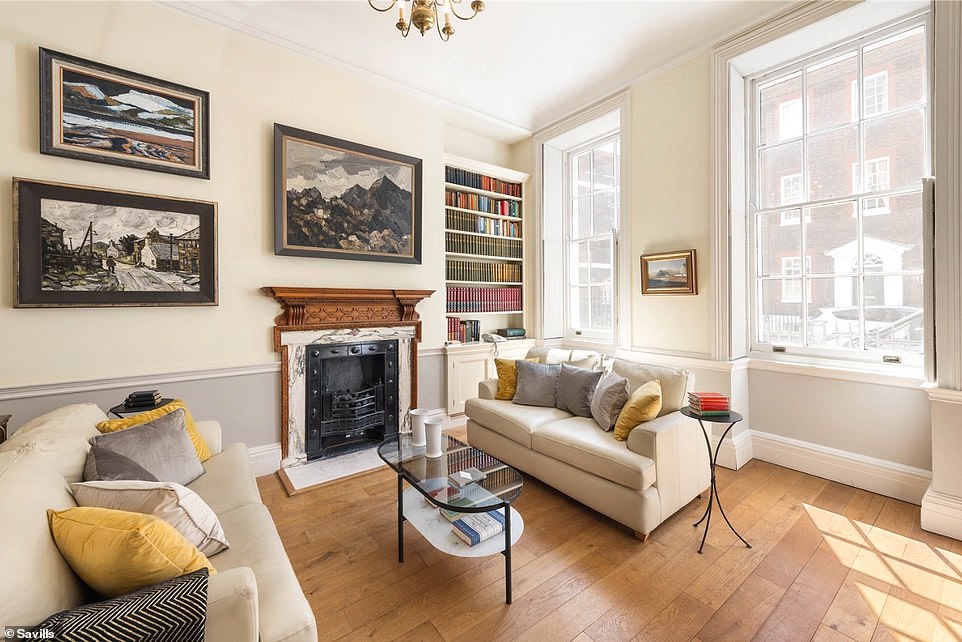 It also has a private garden which is accessible from the kitchen and is licensed from the Royal Parks Authority, meaning the homeowner has direct access to St James’s Park.

The current annual license fee for the garden is £960 per annum but this is subject to review.

Another of the main selling points of the home are the two private terraces that provide an excellent vantage point to view many of London’s most renowned landmarks and events. 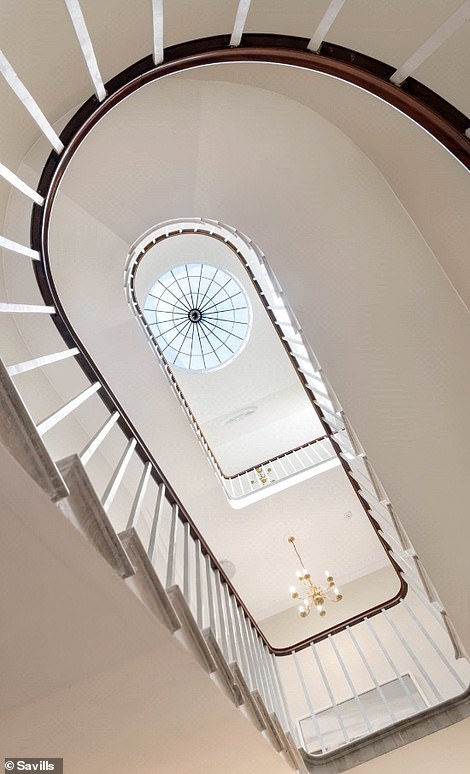 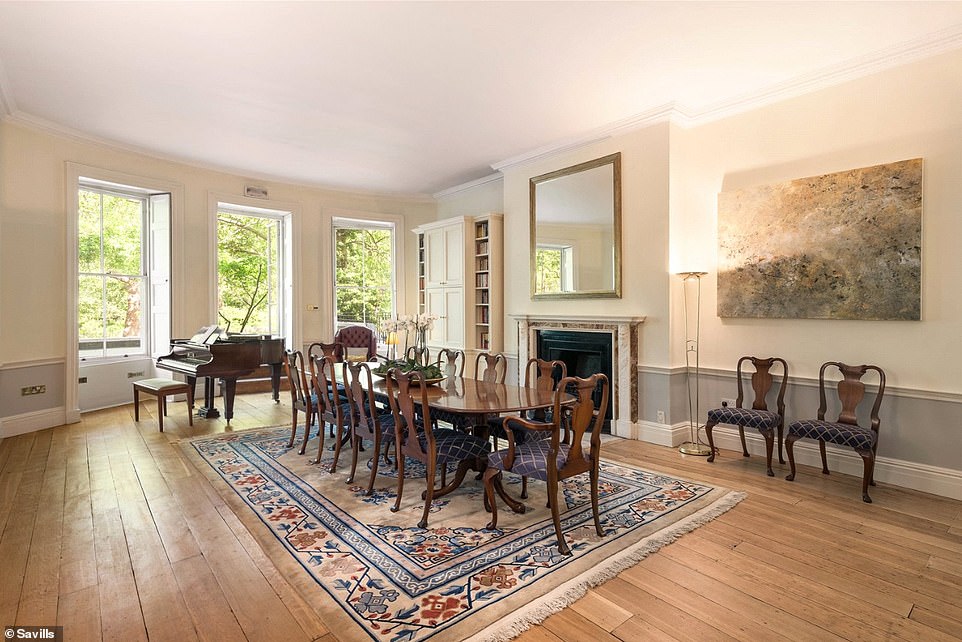 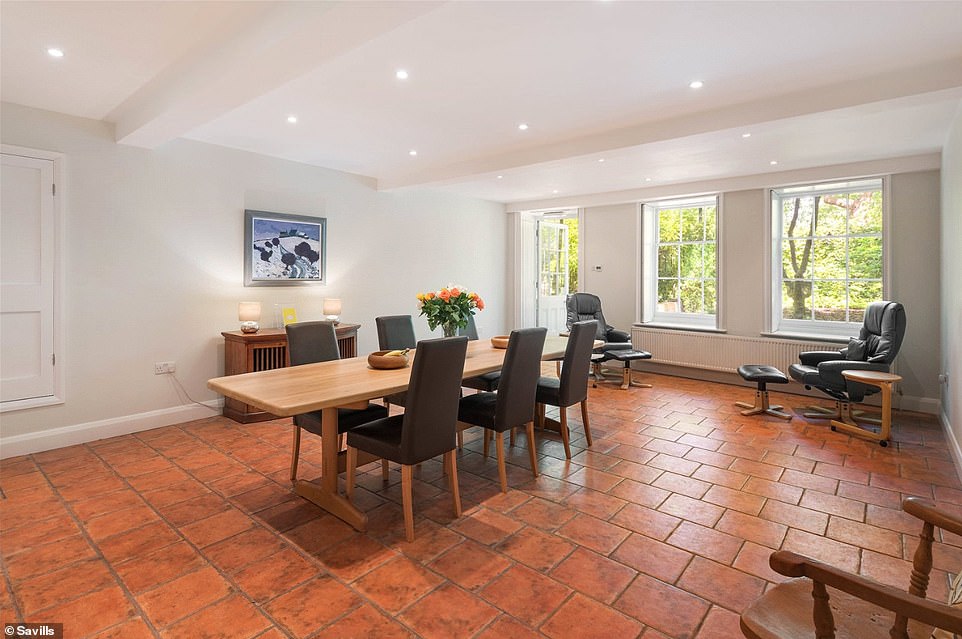 The property comes with a spacious kitchen dining area with views of St James’s Park, London

The owner will be able to see all the way from Whitehall to the London Eye as well as watch the London Marathon and New Year’s Eve Fire work display.

The house is also just 0.1 miles away from St James’s Park tube station and only 0.3 miles away from Westminster tube stop, making it incredibly easy to get around the capital.

Those with children will not have to look far as Westminster Abbey Choir School, a boarding preparatory school for boys, and St Matthew’s School, a primary school in Westminster are both nearby.

The average price for a property in Queen Anne’s Gate is currently £5,887,579, according to property website Zoopla, more than twenty times more expensive than the average property price in the whole of the UK which sits at £286,126. 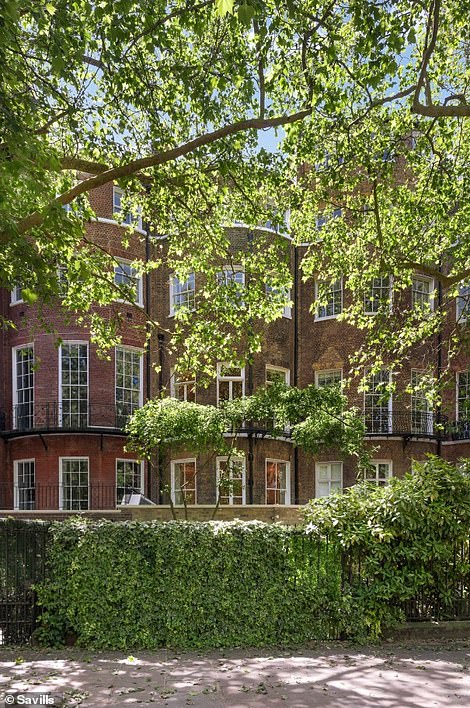 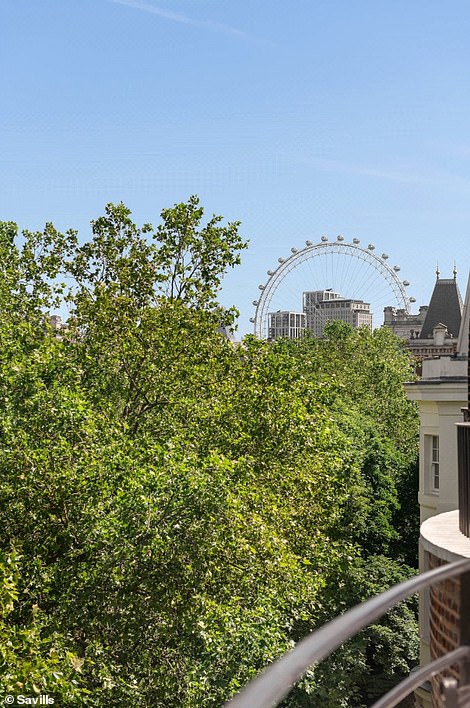 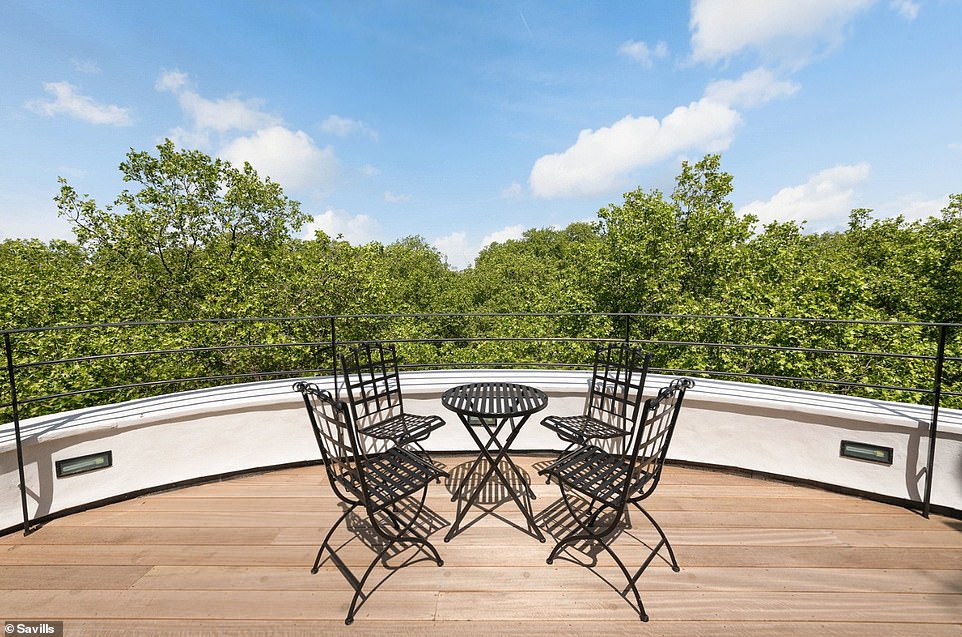 The private garden area, which is accessible through the kitchen, is licensed by the Royal Parks Authority

Matthew Morton-Smith, head of Savills Westminster office, said: ‘Featuring stunning examples of 18th Century architecture and located on one of the best streets in Westminster, this home offers a unique opportunity for someone to buy one of the most historic townhouses currently available.

‘And while its location offers tranquil views onto green open spaces, the home is also close to world renowned landmarks such as the Houses of Parliament, Westminster Abbey, and Buckingham Palace.

‘In addition to its desirable location and architectural significance, the home offers unique history being the birthplace of former Prime Minister, Lord Palmerston.

‘But the standout feature has to be the home’s museum-quality ceilings painted by Angelica Kauffman, one of the two female founding members of the Royal Academy.’

Who was Lord Palmerston? 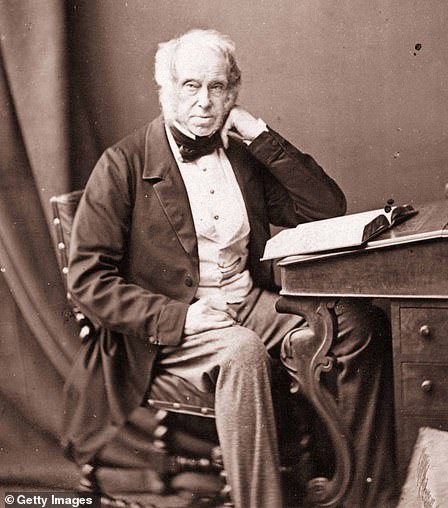 He was over 70, making him the oldest serving Prime Minister, when he took on the role as a member of the Whigs party.

He took over from George Hamilton-Gordon, a Conservative, making him the 35th Prime Minister.

The newspapers at the time described Palmerston as ‘no-nonsense’ and supported his ‘manly’ yet liberal approach to foreign policy.

Palmerston was known for bringing the Crimean War to a generally successful conclusion and passing the Matrimonial Causes Act 1857, which for the first time made it possible for courts to grant a divorce and removed divorce from the jurisdiction of the ecclesiastical courts.

After this, Palmerston introduced a Conspiracy to Murder bill, which made it a felony to plot in Britain to murder someone abroad.

At first reading, the Conservatives voted for it but at second reading they voted against it.

Palmerston lost by nineteen votes and therefore, in February 1858, he was forced to resign.

He later became Prime Minister again in 1859 but this time as a member of the Liberal party.

In this time, he passed the Offences against the Person Act 1861, which codified and reformed the law, and was part of a wider process of consolidating criminal law.

He also passed the Companies Act 1862 which was the basis of modern company law.

Palmerston died whilst still in office, at the age of 80, and was succeeded by John Russell, also a member of the Liberal party.