When young people release memoirs they are often greeted with scepticism: how could they possibly have enough life experience to fill a whole book?

You could argue that 19-year-old singer-songwriter Billie Eilish — already five years into her career and a multiple Grammy winner — actually could. But she’s avoided that route anyway. Eilish’s book released this week Billie Eilish is a coffee table piece that is a chronological visual catalogue of her life, from being a fetus inside her mother’s belly to the just-barely-an-adult person she is today.

In a two-page intro to the photobook — the most words in the whole tome, although Eilish has also scattered captions throughout — the megastar reveals she’s always had a “passion for pictures” and that she thinks it’s “so important” to take photos so that your memories stay vivid. Why is she sharing them with the world now? Well, she doesn’t say, exactly. 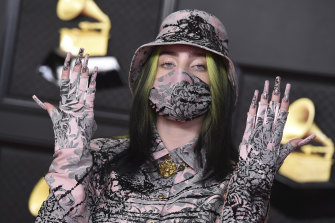 Perhaps it makes sense Eilish assumes we would all be fascinated by these photos. We’re all constantly fascinated by her anyway, right?Credit:AP

There’s page after page of what looks like a pretty ordinary childhood: baby Eilish asleep in her high chair (don’t most of us have a photo like this?) or wearing fairy wings or crying in front of a cake or, as one caption puts it “always eating or pooping”.

We do see hints of Eilish’s future career, her fascination with herself. “I think it’s really interesting to look back on myself when I was a little kid, and see the similarities between me as a toddler and me now,” she writes in her introduction. And there she is, playing with toy microphones and instruments before graduating to actual microphones and instruments at an early age (her first talent show performance was at age six, one photo reveals. She sang the Beatles’ Happiness is a Warm Gun).

The photos shift from the ordinary to extraordinary as Eilish gets older and her career starts and takes off. The average little girl is replaced by a superstar, with professional photos, a cultivated pose and surroundings most people could never even imagine (world tours and Grammys and Oscars, oh my!). And yet, intermingled with this, the very real, very teen girl shines through. She’s there goofing off with her friends in hotels and backstage, giggling in selfies with her mum, and most of all in every “hehe” and “lol” and “teehee” that captions the images.

If you’re looking for insight into Eilish’s creative process or even her feelings about her life and all its ups and downs, this book is not the place to find them. It’s literal snapshots of her literal growth. She wants the images to speak for themselves, but they don’t particularly have a lot to say.

The most insightful moment comes in a caption between two images of a young Eilish — she looks no more than 10: “I remember thinking I was so old and mature in this period of time; crazy to look back and see literally a CHILD.”