Well it’s about time Bill and Ted showed up to save us from the 2020 doldrums. Why didn’t they bring a better movie along for the ride?

Sorry, dudes and dude-ettes. Bill & Ted Face the Music, the third movie in the endearing time-traveling adventure and the first one in 29 years, falls short of bodacious. Happy yet hapless, the comedy is sort of like a high school reunion: Good times in theory — whoa, Keanu Reeves can still channel his goofy side at age 55! — but anticlimactic once you show up and realize that hijinks have a shelf life. At least our well-meaning heroes are still excellent.

Let’s get you up to speed. More than 25 years have passed since doofus metal-heads Bill S. Preston, Esq. (Alex Winter) and Theodore Ted Logan (Reeves) last squished themselves into a phone booth to journey through time and space to pass their history exam — and, you know, ultimately bring peace to the world. They’re still best friends with a limited vocabulary. They’re also married to those beautiful 15th-century English princesses. Ted has a teen daughter named Billie (Brigette Lundy-Paine). Billy’s girl is Thea (Samara Weaving). Alas, the guys are not exactly fulfilling their destiny. 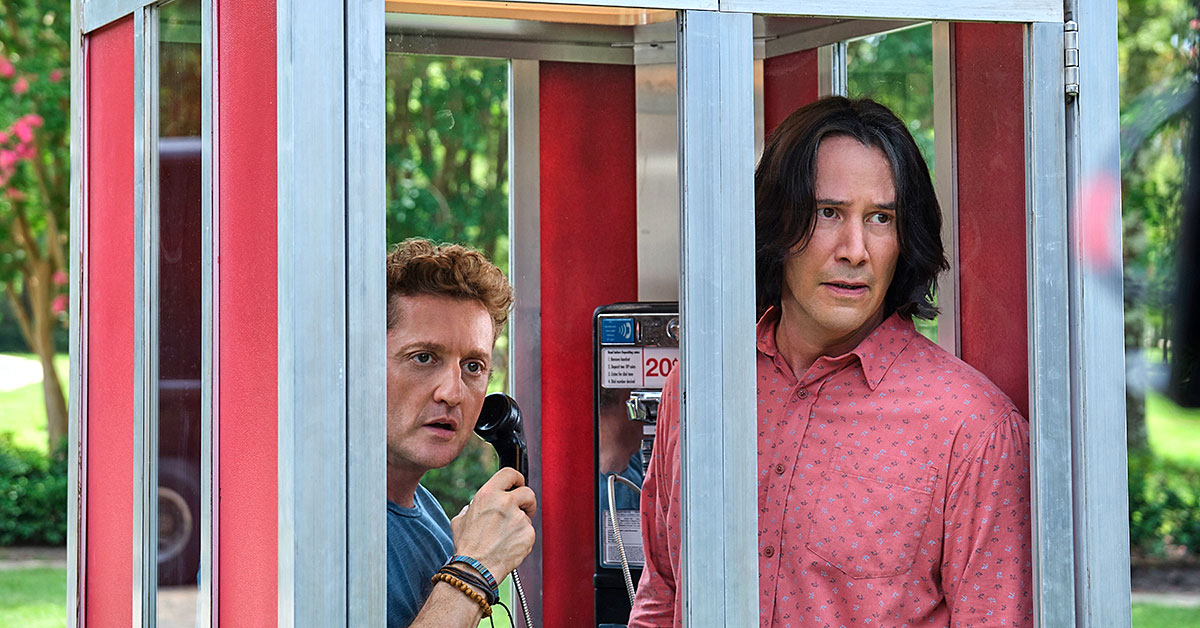 Though we last saw Bill and Ted play an epic concert broadcast all over the globe, the pair and their band, Wyld Stallyns, have fallen on hard times. Now they’re doing weddings and just a few years removed from performing at hole-in-the-wall taco joints. Enter a concerned time-traveler — the daughter of Rufus, i.e., their original time ambassador — to take them back to the future. Bill and Ted learn from the higher-ups that they have just 77 minutes and seven seconds to unite the world in song and “save reality.” As they search far and wide for the perfect song, their daughters embark on their own trip to help their dads.

Considering the writers had decades to tinker with the screenplay, the story is surprisingly labored. More frustrating, the overstuffed chain of events harkens closer to the weird 1991 sequel, Bill & Ted’s Bogus Journey, than the spirited 1989 original, Bill & Ted’s Excellent Adventure. The guys try to create that song and press fast-forward to check in on themselves and help their faltering marriages and go to hell to see an old friend. Billie and Thea’s adventure is a silly after-thought.

Then again, the Bill & Ted flicks have remained part of the pop culture lexicon because they never tried to be high-brow comedy. Before Seth Rogen, Wayne’s World and even Bart Simpson, these two underachievers just wanted to have fun. We loved them for it. And to Reeves and Winter’s credit, they sold the characters with undeniably sweet and slack-jawed charm. They made sure their alter-egos were good at seeing the good in people. Stream Bill & Ted’s Excellent Adventure and see it for yourself. Reeves is literally wide-eyed for 91 minutes.

The Best Comedies to Make You Feel Better While Social Distancing

All these years later, that joy pops off the screen. Yes, it’s admittedly jarring to see the former teens as middle-aged family men. Bill and Ted aren’t just facing the music — they’re facing wrinkles, deep voices and, yikes, less pep in their step. The passage of time works to their advantage in a most affecting way: Reeves and Winter play off each other as if they’ve truly been riffing in their garage for the past 30 years. Their chemistry is the real deal, and their dialogue still generates easy laughs.

If you go in your own phone booth and travel back in time, you’ll discover that few comedy sequels have ever surpassed their predecessors. Bill & Ted Face the Music is not the exception — and not just because phone booths have gone the way of VHS tapes and Bon Jovi cassettes. But no matter what the future holds, it is comforting to know that Bill and Ted continue to smile and rock on.

Bill & Ted Face the Music opens in select theaters and on premium on-demand on Friday, August 28.