The International Space Station’s population swelled to 11 on Saturday with the jubilant arrival of SpaceX’s third crew capsule in less than a year.

It’s the biggest crowd up there in more than a decade.

All of the astronauts — representing the U.S., Russia, Japan and France — managed to squeeze into camera view for a congratulatory call from the leaders of their space agencies. 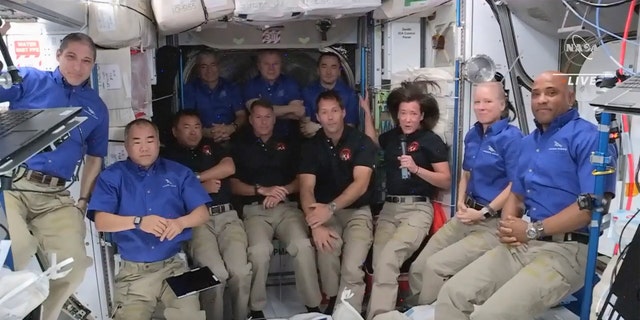 “In this tough situation around the world, I believe you have brought courage and hope for all of us,” Japanese Space Agency President Hiroshi Yamakawa said from his country’s flight control center, referring to the global pandemic.

A recycled SpaceX capsule carrying four astronauts arrived at the space station a day after launching from NASA’s Kennedy Space Center. The Dragon capsule docked autonomously with the orbiting outpost more than 260 miles (420 kilometers) above the Indian Ocean. The hatches swung open a couple hours later, uniting all 11 space travelers.

“Man, it is awesome to see the 11 of you on station,” said NASA’s acting administrator, Steve Jurczyk. He noted that this will be the norm, now that SpaceX is regularly flying crews.

The newcomers will spend six months at the space station. They’ll replace four astronauts who will return to Earth in their own Dragon capsule Wednesday to end a half-year mission. NASA deliberately planned for a brief overlap so the outgoing SpaceX crew could show the new arrivals around. 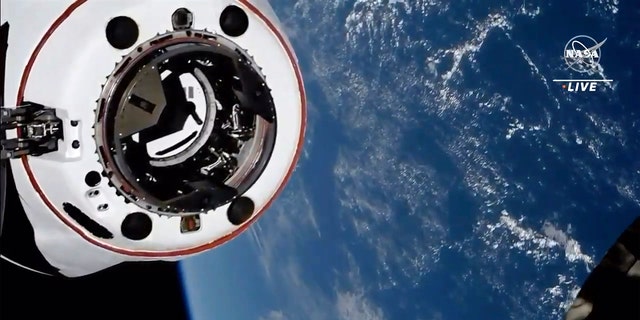 This image made from NASA TV shows the SpaceX Crew Dragon spacecraft, with the Earth behind, approaching the international space station, Saturday, April 24, 2021. The recycled SpaceX capsule carrying four astronauts has arrived at the International Space Station, a day after launching from Florida. (NASA via AP)

Although this was SpaceX’s third crew flight for NASA, it was the first to use a vehicle that’s flown before, an essential part of the push to the moon and Mars. The Dragon capsule was used for SpaceX’s first crew launch last May, while the Falcon rocket soaring Friday hoisted crew two in November.

It was the first time two SpaceX crew Dragons were parked there at the same time — practically side by side.

NASA astronauts Shane Kimbrough and Megan McArthur — the commander and pilot of the returning Dragon — monitored their capsule’s flat screen computers during the morning rendezvous. They could have taken control if necessary, but the autonomous system did its job, much like a self-driving car.

Also checking into the space station: France’s Thomas Pesquet and Japan’s Akihiko Hoshide. Both have lived there before, as has Kimbrough. But it was the first station visit for McArthur. She flew up in the same seat and the same capsule — named Endeavour — as her husband, Bob Behnken, did on SpaceX’s debut crew mission. 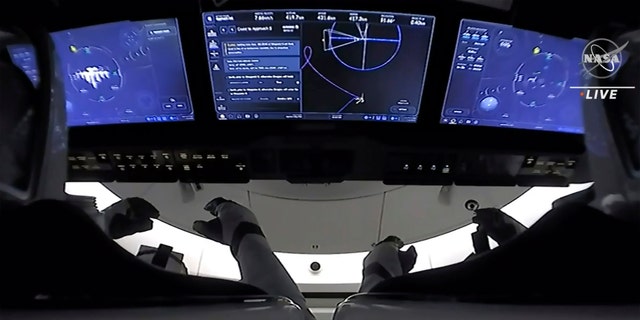 In this image made from NASA TV, the astronauts are seen in the cockpit of the SpaceX Crew Dragon spacecraft as the spacecraft prepares to dock with the international space station, Saturday, April 24, 2021. The recycled SpaceX capsule carrying four astronauts has arrived at the International Space Station, a day after launching from Florida.(NASA via AP)

The European Space Agency’s director general, Josef Aschbacher, joked that the space station needs expansion with so many on board.

Pesquet — the first European to fly on a commercial crew capsule — noted that the space station has changed quite a bit since his last visit four years ago, with more people and types of spacecraft.

“We’re so happy to see our friends,” he said. “We wish we could keep them a little bit longer, but not too long as well, because 11 people is a lot on a space station.”

The all-time record is 13, set during NASA’s space shuttle era. 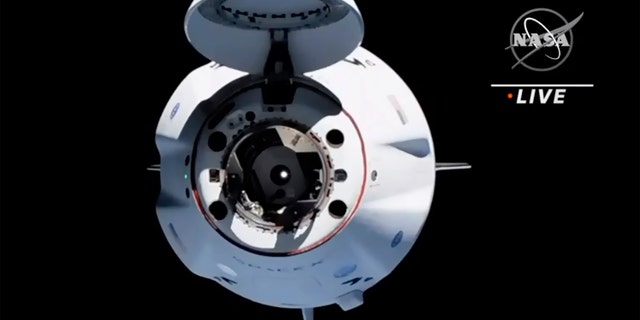 In this image made from NASA TV, the SpaceX Crew Dragon spacecraft is seen from the international space station, Saturday, April 24, 2021. The recycled SpaceX capsule carrying four astronauts has arrived at the International Space Station, a day after launching from Florida. (NASA via AP)

The current population includes six Americans, two Russians, two Japanese and one from France. It will shrink by four on Wednesday when three Americans and one Japanese depart for home and a splashdown in the Gulf of Mexico.

NASA turned to private companies for space station deliveries after the shuttles retired in 2011. SpaceX began supply runs in 2012, honing its skills before launching astronauts and ending NASA’s reliance on Russia. NASA also hired Boeing for taxi service, but the company’s Starliner capsule isn’t expected to fly astronauts until next year.