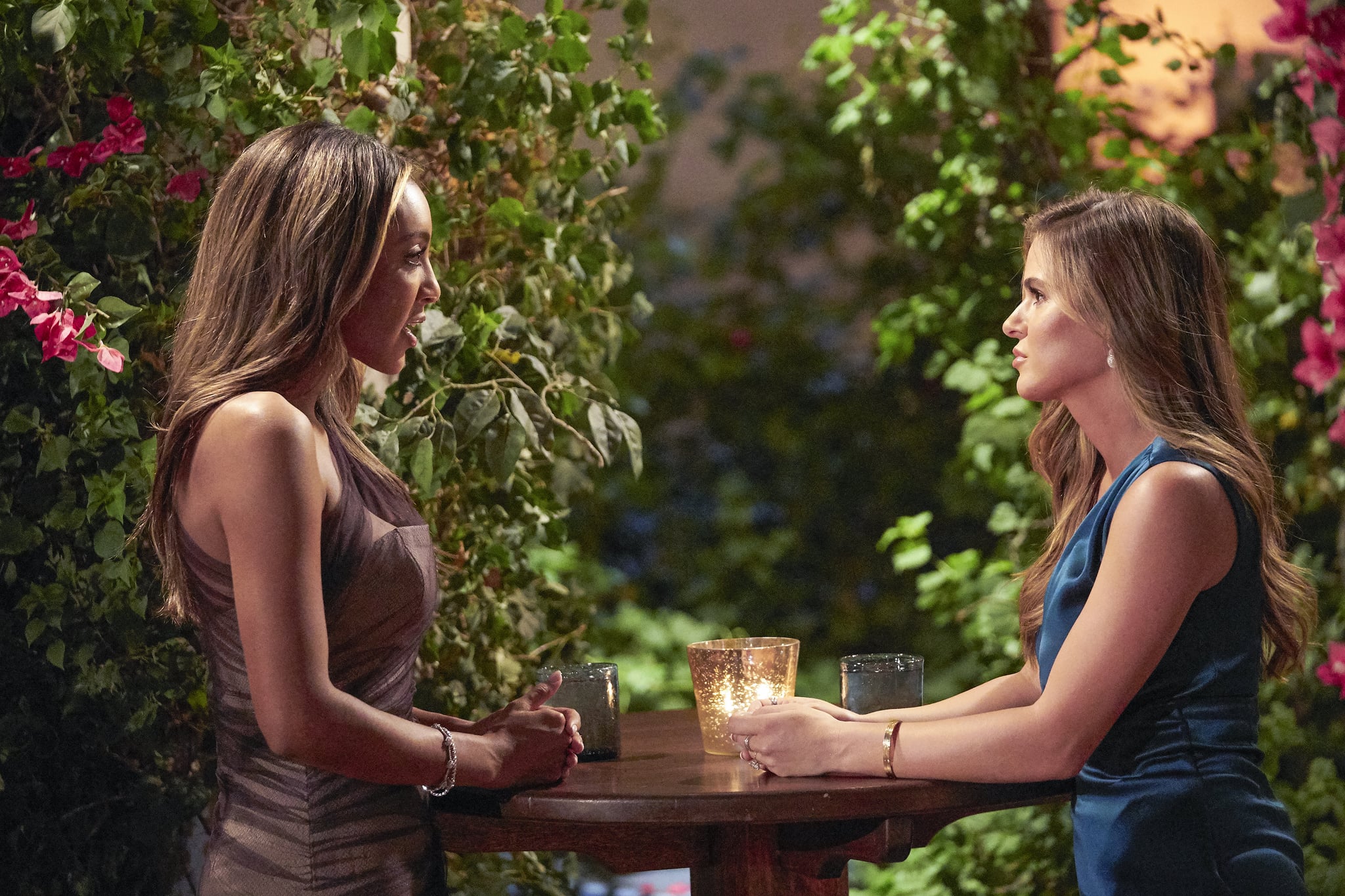 This week’s episode of The Bachelorette made waves for a very unusual reason: the host! While Chris Harrison left the filming bubble to help his son move to college, former Bachelorette JoJo Fletcher took on hosting duties. JoJo’s appearance and her dynamic with Tayshia got us wondering: what would the show look like with a woman as the host full-time? I can’t help thinking that it might help to address some of the show’s long-running problems, although it’s not a perfect solution.

Chris Harrison’s role, especially in Bachelorette seasons, is to be an enforcer of sorts. He’s there to cool the guys down when they go over-the-top, to be a buffer between the lead and the contestants, and to offer a bit of fraternal (or even paternal) solidarity. The result, though, is that he can occasionally come across as the “final word” or as the “protector” keeping things from getting out of hand — both of which reinforce dated gender dynamics. We’ve seen before how dejected guys won’t totally accept that they’ve been rejected until after Chris handles things; we’ve seen Chris have to put his foot down even after the Bachelorette has said no. Even this season, we saw Chris get sent out to eliminate Zach J. after a controversial and uncomfortable date with Clare — all positioning a guy as the final arbiter of things, even when a woman is the lead of the show. It’s not as big a deal when it’s a Bachelor cycle, but it can come across awkwardly with Bachelorettes in charge.

During Tayshia’s part of the season, things went even further when Ed wound up knocking on Chris’s door when he was looking for Tayshia to plead for another chance after a less-than-successful group date. Instead, he got invited in by Chris to pour out a drink and, presumably, his woes. The whole situation had a sort of “women, what can you do, bro?” feel to it, which is really not the vibe that a show with a heavily female audience should be going for in 2020. And, to be honest, there’s always been a bit of that feeling to the entire Bachelor franchise. It’s a show that was created by a man, hosted by a man, and frequently depicts stereotypes from a (stereotypically) male point of view.

Bachelors and male contestants always fit into a very narrow vision of what a man should look like and are asked participate in challenges that often focus on bro-y fake aggression or make a big deal out of how hard it is for men to open up, while Bachelorettes and female contestants are often given catty challenges and have a heavy focus on their sexuality. There are exceptions, of course (see: Ivan and Tayshia’s phenomenal conversation this season), but even the moments that are “supposed” to be female gaze-y, such as this season’s “wrestling match” group date, still prioritize depicting the guys as “manly” men in a very narrow definition of what that means. The host, then, is the “sane man,” the totally neutralized guy who’s above it all and can herd everyone, regardless of gender, into place.

With all these problems baked into the format and style of the show itself, could just switching to a female host fix things? No, not entirely, but it would be a step in the right direction, especially for seasons of The Bachelorette. It would give the lead of the season another woman to bounce things off of, rather than a man, and it would also establish “women in charge” across the board as both the host and the lead. This is nothing against Chris Harrison, who’s pretty much the face of the franchise at this point and has done an excellent job of being the level-headed, mildly amused voice of reason through countless seasons and spinoffs — but wouldn’t it be nice to have the face of the franchise look more like the majority of the people watching at home?