Since the outbreak of the coronavirus pandemic, some democracies around the world have used technology to avoid having to impose draconian mass quarantines that were common earlier this year in China. That's reassuring – and it's also worrying, because the very strategies that can help fight a plague can also be abused once it's over. 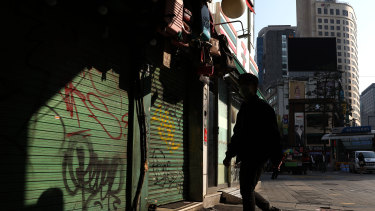 In South Korea, the government constantly updates a website that tracks the movements of people who have been infected, and issues alerts to the mobile phones of people in the geographic vicinity of an infected citizen.Credit:Getty Images

Consider Taiwan, where an "electronic fence" allows local police to make regular phone calls to everyone who is home under quarantine; if the citizen doesn't answer or the phone is out of power, police come to the home within 15 minutes. In South Korea, the government constantly updates a website that tracks the movements of people who have been infected, and issues alerts to the mobile phones of people in the geographic vicinity of an infected citizen. The Israeli government gained access to an archive of phone data to map the movements of infected people, then alerted those who had been in contact with them to self-isolate.

Again, invoking these powers is reasonable during a pandemic. Once the outbreak is over, however, this kind of power can and probably will be abused. What's to stop a corrupt (or merely unscrupulous) leader from using such technologies to learn or even publicise the location of political opponents or dissidents?

"This is a genuine emergency and that justifies a lot of things that would not normally be justified," says Jay Stanley, a senior policy analyst at the ACLU. "But we have to make sure that these temporary powers do not become permanent in a way that hurts everybody else."

The good news is that the pandemic is not an endless war. Once there is a treatment or a vaccine, there will be a clear end date to the state of emergency. And the US government has so far not broached the prospect of mapping the locations of large segments of the population.

In part that's because doing so would be difficult. The data needed to track locations of US citizens are mainly in the hands of private companies, such as wireless carriers and a network of companies that track the locations of app users and sell the data for marketing purposes. There is no central database.

Nonetheless, it's not too soon to begin thinking about how to unwind any assumed emergency powers after the pandemic ends. Representative Tom Malinowski, a Democrat from New Jersey who formerly served in the State Department, says that he hopes the US does not have to carry out the kinds of measures adopted in Taiwan to enforce home quarantines of the infected. If the US is forced to consider such measures, he says, "they had better contain sunsets."

Such harsh monitoring measures are unlikely now. But it's possible that South Korea's or Taiwan's approach would be necessary if the US has to battle a second wave of the virus.

To prepare for that day, says Stanley, it's crucial to set up strict rules beforehand. Any location data, for example, should only be used by public health authorities for public health purposes. The programs should be temporary and the data should be deleted after the crisis ends.

Along these lines, Freedom House released a set of principles last week for protecting civil and human rights in the fight against COVID-19. It says any surveillance programs that use new technology to fight the spread of the disease should be "subject to independent oversight, and 'firewalled' from other commercial and governmental uses such as law enforcement and enforcement of immigration policies."

"We recognise some of those technologies could be needed by democracies to track the pandemic," says Freedom House President Michael Abramowitz. But governments should explain why the surveillance is needed, he says, contain an end date for the program, and include clear lines of oversight from the judicial and legislative branches of government.

In the middle of a crisis, all of this might seem theoretical. The most essential tasks for democratic leaders are providing for the public safety and working to revive the economy. Yet it's also important to remember that the state rarely relinquishes powers it amassed in a crisis.

After 9/11, the FBI was given broad new powers to demand data from private businesses. A dozen years later, both the ACLU and the Justice Department's inspector general found that the use of that extraordinary power had become routine and unchecked. As Americans grapple with the current pandemic, they must be vigilant that their government not repeat the same mistake.