The Beirut explosion, which has killed at least 158 people, went off in the Port of Beirut, Lebanon, on August 4. NASA has now used data from space to determine where the most damage was sustained. The blast has left some 300,000 people homeless and 6,000 people injured.

Authorities have traced the explosion to a warehouse storing more than 2,000 tonnes of ammonium nitrate fertiliser.

The explosion was felt up 120 miles away in Cyprus.

NASA’s map reveals the extent of damage in red, orange and yellow pixels.

Red pixels represent the most severe damage, which was concentrated around the city’s port. 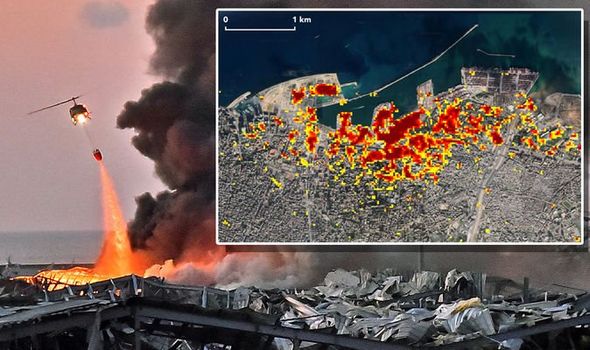 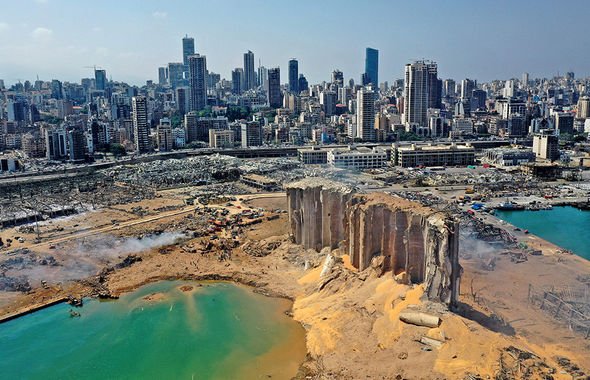 Each pixel covers an area of about 33 yeard or 30 metres.

NASA said: “Synthetic aperture radar data from space shows ground surface changes from before and after a major event like an earthquake.

“In this case, it is being used to show the devastating result of an explosion.”

Space agencies like NASA can use such maps to help identify badly damaged areas for relief efforts.

In this case, it is being used to show the devastating result of an explosion

Officials estimated the explosion has caused up to £11.5billion ($15billion) of damage.

The blast has been described as one of the biggest ever non-nuclear explosions.

According to Professor Andy Tyas from the University of Sheffield, the explosion was comparable to up to 1,500 tonnes of TNT.

An explosion this big is only about a tenth of the power of the nuclear bomb dropped on Hiroshima in 1945. 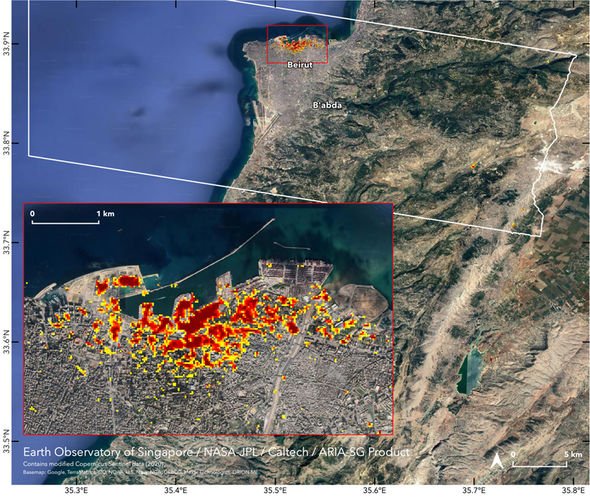 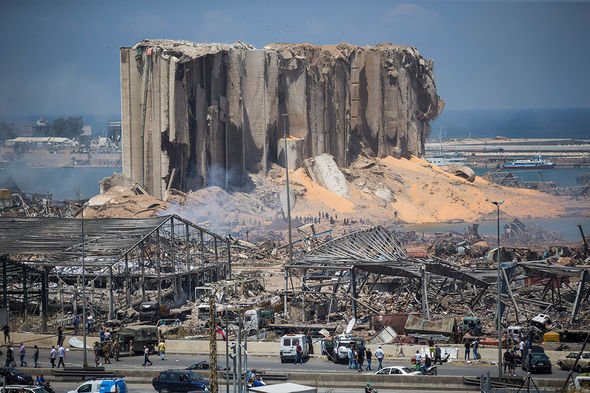 Professor Tyas said: “There are simple rules of thumb relating the maximum expansion of the fireball to the size of the original explosive charge, and from some very approximate measurements from online video footage, we think the explosion is equivalent to something of the order of 1,000 to 1,500 tonnes of TNT.

“We have also analysed video footage of the time delay between the detonation and the arrival of the shock wave at points several hundred metres from the explosion and these broadly agree with this size of charge.

“If correct, that would mean this explosion had perhaps 10 per cent of the intensity of the Hiroshima bomb

“Whatever the precise charge size, this is unquestionably one of the largest non-nuclear explosions in history – far bigger than any conventional weapon.”

The explosion appears to have been triggered by a warehouse fire that set off the ammonium nitrate stockpile.

The fertiliser has been kept at the warehouse since 2013 when it was confiscated from a cargo ship.

The data was then analysed by NASA’s Advanced Rapid Imaging and Analysis (ARIA) team, in collaboration with Singapore’s Earth Observatory.