In 2016, I had over 100,000 followers on Instagram, a book deal and the beginnings of a promising television career.

I was an accidental influencer, who should have been sipping a #gifted cocktail on a flamingo-shaped pool float.

Instead, that June, I found myself voluntarily checking in to the Priory, where I was being treated for bipolar, anxiety, insomnia and what I now know was a straight up addiction to scrolling social media.

It was around the 20,000 follower mark that I realised I needed my phone on my person, like gollum needs his ring.

Instagram was the first thing I reached for when I woke up, and the last thing I looked at before I attempted to sleep. Instagram was my world, I was good at it, and so everyone assumed that I must have it made.

I’ve never been the type of person you would expect to become an ‘influencer.’ I’m not good at make up, I dress like a giant toddler and can’t use a ring light without squinting.

Little did I know that in a sea of Instagram perfection, this was exactly what the people had been waiting for. I started an Instagram account satirising the ‘clean eating movement’ – an offshoot of wellness popularised by middle class white women who love to smile at salad. I used the name ‘deliciously stella’ in homage to eat clean queen, Deliciously Ella and in only a matter of months the account took off. 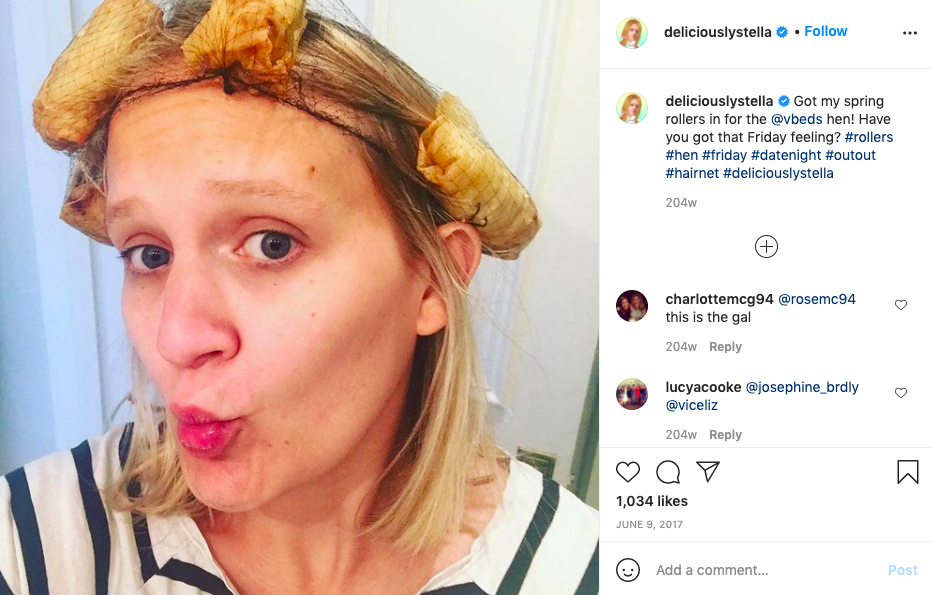 I made ‘healthy’ recipes out of sweets and took pictures of myself with a hangover using the hashtags #eat, #nourish, #glow. Before long the account had gone viral, I’d become an influencer in my own right and I’d achieved the influencer holy grail, sponsored content – otherwise known as spon con.

At first, Instagram felt like a golden ticket. The more followers I got, the more opportunities I was offered. I started a podcast, tried my hand at acting and presenting in shows for BBC3 and most importantly, got invited to parties DJ’d by celebrity offspring like Rafferty Law where the drinks and the perks were free.

As a reluctant stand up comedian, preparing to take a show to the Edinburgh festival after performing five times for five minutes, I was thrilled to find that I could earn money being funny without having to set foot in a comedy club. Brands even offered to pay me to make jokes using their products!

I was invited to press events and parties, my post box filled up with everything from free brownies to juice cleanses. I was living the Instagram dream. One in five children now say that they want to be ‘influencers’ when they grow up.

I had hit the jackpot but instead of feeling ecstatic, I was completely overwhelmed.

I’d set myself up with a target to post every day, something that my followers came to expect. Any deviation from my self imposed schedule led to interrogation, ‘where are you?’, ‘Why haven’t you posted today?’, ‘I need my Stella.’ At times I was struggling to think of a suitable joke, other times I was unable to access the internet, more often than not I was in the grips of a mental health crisis.

I wanted everyone to think I was happy, I thought that would make them happy too.

It soon became clear that by presenting myself a certain way on social media, people were led to believe I was the same way in real life.

I found that things ran smoothly when I was self deprecating, when I ordered chips and maintained an air of someone who had just rolled out of bed. I ordered pudding when I didn’t want it, derided all alternative medicine in spite of a previously tolerant attitude to different ways of living.

I even found myself changing my voice, dropping my T’s and adopting an estuary twang to better fit what I thought my followers had projected onto the smiling, silent square images on my account. I hid the parts of my personality that didn’t fit the mould. I even stopped going to the gym in case I was spotted and I started wearing more clothes with slogans like ‘In fries we trust.’

I stuck at it, because I was convinced this was my only shot at success, and because I really liked to be liked. If people wanted Stella, I’d give them Stella. External validation was powering the smoke being blown up my arse and I wasn’t ready to admit who I was and stop.

I found myself using Instagram like a slot machine, gambling on whether a post would get enough likes to get me through the day. Over 1000 was my limit of acceptability, preferably acquired withing 10 minutes. If a joke hit the jackpot I’d spend the rest of the day on cloud nine. If it didn’t land I was inconsolable.

Eventually all I could talk and think about was my Instagram account. What was I going to post? How good was my engagement? Who was getting more likes, follows, gifts and opportunities than me? Instagram had awakened a green eyed monster; I coveted other influencers’ lives, while knowing exactly how fake the industry required them to be.

Make no mistake, the influencer life looks glamorous and, in many ways, it is. But hustling is still hard. It’s easy to assume that all you have to do is post a pretty picture and wait for the likes and money to roll in, but engaging a following, monetising it and closing a deal requires determination and graft.

Your success or lack thereof can be measured by anyone at any time just by a glimpse at your public account. You’re only as good as your last post and towards the end I hoped that every post would be my last. I was suicidal, desperate not to be either my Instagram alter ego or myself.

After a press trip in LA where I tried posting as Bella, I finally acquiesced that the social media life was not for me. I killed Stella and I have no regrets.

Immediately after announcing that I would no longer post as Deliciously Stella on Instagram, people rushed to question why. Some were upset, most understanding. Nobody had suspected I’d been anything less than happy.

While I am still on social media, I feel as though I am in recovery from the way it made me feel. I need it for my job, but not for my self worth.

Writing about my experience in the Priory – the relief in being honest – has been life changing. I now primarily earn a living through writing or by doing social media for brands, something which gives me some distance from my need for validation. Going forward I’d love to write fiction. It’s time to separate my identity from my career.

The most important thing I learned from my time as an accidental influencer, is that nobody cares about you as much as you. The only person you need answer to or be accountable to is yourself and the people you care about. Likes are not the same as love.

I still enjoy a good scroll on Instagram but now I scroll not to distract myself, but with intention. I open the app when I’m looking for genuine connection, when I think that interaction on a screen can lead to interaction in real life.

To anyone considering life as an influencer, I’d say, don’t quit the day job without money in the bank and you have grown skin like the hide of a rhino.

People appear to get into it because they like to be liked, I left when I truly learnt to like myself.

The Accidental Influencer by Bella Younger is out now (HarperCollins, £14.99)

Metro.co.uk’s weekly The Truth Is… series seeks to explore anything and everything when it comes to life’s unspoken truths and long-held secrets. Contributors will challenge popular misconceptions on a topic close to their hearts, confess to a deeply personal secret, or reveal their wisdom from experience – good and bad – when it comes to romance or family relationships.