Warmer weather means that bears in many parts of the country are becoming active again.

In Kings Beach, California – a small town at the northern end of Lake Tahoe – a family of black bears recently forced their way into a home, causing damage including a gas leak, according to the Placer County Sheriff’s Office.

The mama bear and three cubs peeled siding off the home to break into the basement, deputies said in a Facebook post.

The home was “torn apart” by the bears, according to deputies. Fortunately, the owners weren’t home at the time.

Authorities discovered the bear break-in after a neighbor smelled gas and called 911. Fish and Wildlife officials came to remove the bears from the home.

The sheriff’s office also shared photos of the damage.

“This is a friendly reminder to keep your homes, windows, sliding doors, and cars locked at all times, and to make sure no remnants of food or food wrappers are left in areas accessible by bears,” they wrote in the Facebook post. 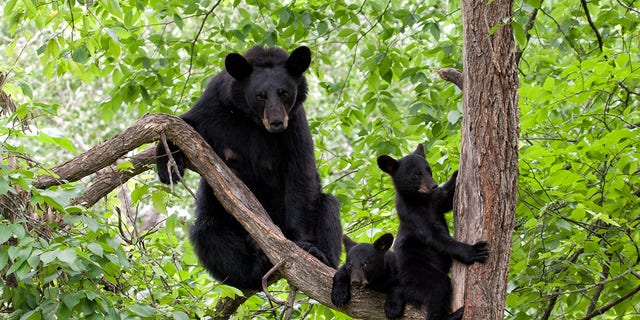 Warmer weather means that bears in many parts of the country are becoming active again. (iStock)

“Bears have an extraordinary sense of smell, and can detect food from about 20 miles away — their sense of smell is seven times better than a blood hound’s,” they wrote.

This wasn’t actually the first case of a mother bear seeking a shelter for her cubs inside a basement. Last month, utility workers responding to a report of a gas leak in Tennessee also discovered a family of bears was responsible for the damage. After the damage was repaired, the homeowner agreed to let the animals stay so that the cubs could be reunited with their mother.

The Lake Tahoe area is home to a very active bear population. Last fall, Fish and Wildlife officials had to relocate one notorious bear that had been caught on camera stealing food from multiple stores and a birthday party in Kings Beach.