Autistic boy, nine, who lost touch with friends after spending months in hospital receives more than 700 birthday cards after his mother made a Facebook appeal

A deaf and autistic boy who hasn’t got any friends, was surprised with more than 700 birthday cards sent by strangers across the world.

Natasha James, 33, from Plymouth, Devon, put an appeal out on Facebook to see if anyone would send her son Dylan a card for his ninth birthday.

Having been taken out of school due to his condition more than a year ago, Dylan lost contact with other pupils while he spent nine months receiving treatment in London.

Natasha said they were stunned by the mountain of cards that kept arriving through the post for him – even during the coronavirus lockdown. 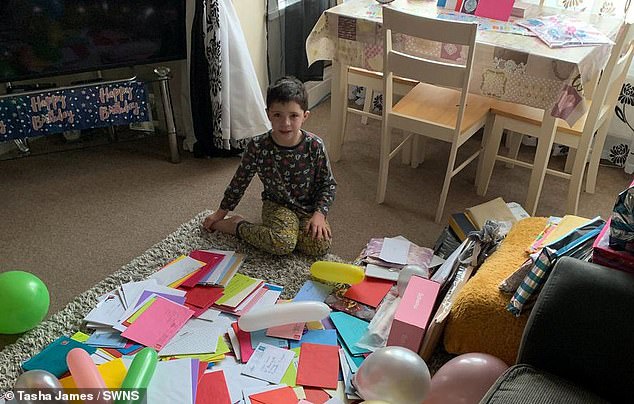 Dylan James (pictured) from Plymouth, Devon, who was taken out of school over a year ago due to his health condition, has received 714 birthday cards from strangers around the world

Dylan spent most of his birthday on Thursday 26 March, opening up his 714 cards as his mother filmed his joyous reaction to all.

Natasha said: ‘Dylan spent a long time in London in hospital and has been out of school for over a year. He doesn’t have any friends, which is horrible to say.

‘I put an appeal on Facebook to see if anyone would send him a card.

‘The response we had from strangers was completely overwhelming. People were contacting us saying they would like to buy him something, and what sort of card would he want.

‘They were absolutely brilliant. We thought we might get about 100, which would have made it very special. But the last count we had 714.

‘They were still putting things through the door right up until his birthday and leaving presents on the doorstep.’

Natasha revealed they received cards from as far away as Las Vegas and Australia. A chief petty officer in the Royal Navy, known as Bernie, also delivered a box of arts and crafts and 55 cards from all recruits at the navy barracks.

She continued: ‘We have been inundated with cards and little gifts. The appeal went live on Facebook four weeks ago and things started arriving the following day. The postman had to knock on the door every day and they had to come in a special van. Some days there were 10, other days there were 50. 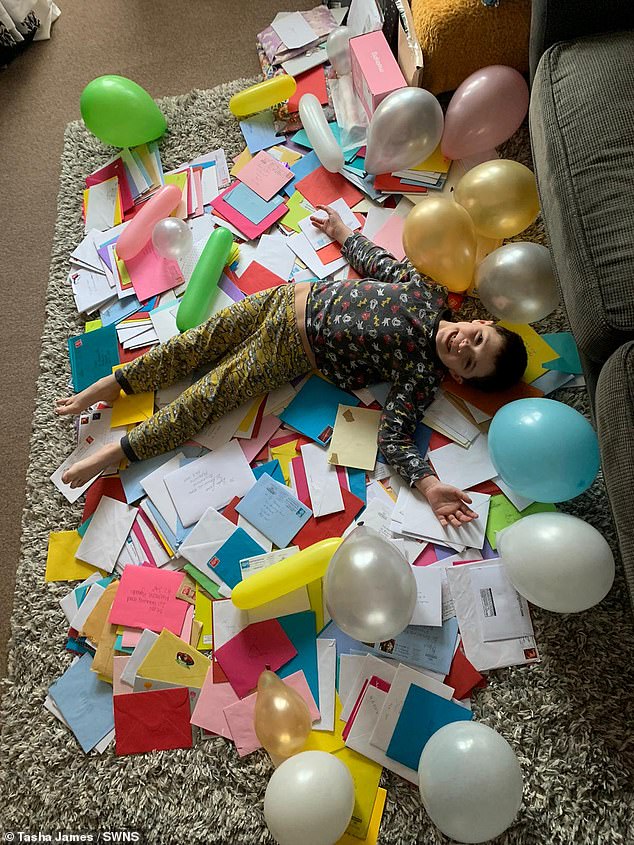 Dylan (pictured) received birthday cards from as far away as Las Vegas and Australia, in addition to small gifts 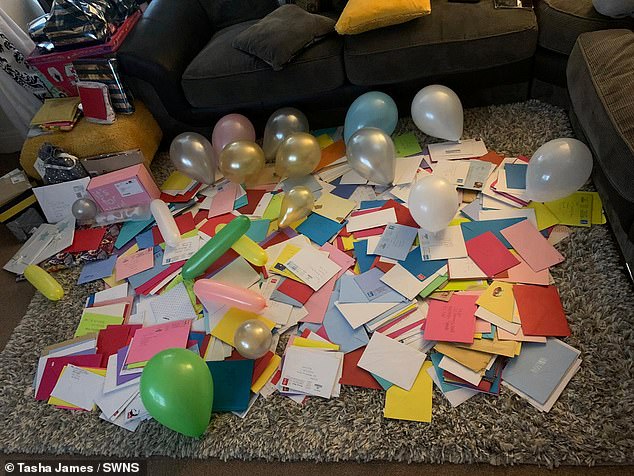 Dylan’s mother Natasha James, 33, revealed his birthday was tough to celebrate because he didn’t understand why he couldn’t go out

‘On his actual birthday we had 103 cards.

‘We were stunned. I put the appeal up and just hoped for the best and thought some would be better than nothing.

‘It is such a tough time for people at the moment and they are not meant to be going out.

‘We thought it would really slow down with the coronavirus but people were still making the effort by posting them during their only exercise of the day and they continued to turn up.

‘We are just so grateful that we are surrounded by such lovely people who were able to make Dylan’s day so special.

‘His birthday was tough. He is autistic and does not understand why he can not go out. He kept asking throughout the day, can we go out now and can he have a friend come over? 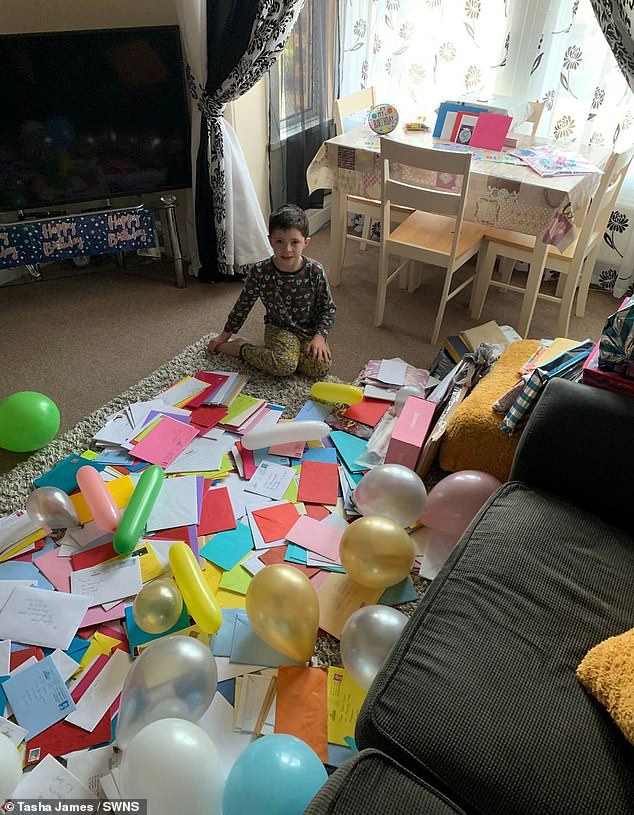 Natasha said the cards posted to Dylan (pictured) has been overwhelming, they will be rotating a display of the post in their front room

‘Every time he did we just went back to open more cards. It took hours to go through them all.

‘It certainly gave us something to focus on and made the day a lot easier.

‘People are only allowed out once a day and to think during this time they wanted to post cards for my little boy was overwhelming. It means the world they were still making the effort for Dylan.

‘You can see in the video he was totally overwhelmed. His reaction was brilliant. He didn’t know where to start and was so intrigued to find out where they had all come from.’

Natasha said Dylan had been out of school since February last year and had lost contact with everyone since. He spent nine months in London being treated and was now living at home with his three siblings.

She added: ‘He does not understand the situation so it has been difficult with him. But this meant the world to us.

‘We will display the cards as much as we can in the front room and will be rotating them each day.

‘It made a very difficult time slightly easier and we will be forever grateful to the kindness strangers showed to my little boy.’