Australia’s coastline could soon be opened up to more oil and gas drilling even as the United Nations declares the world cannot afford to increase fossil fuel production if it wants to avoid catastrophic global warming and 80 nations pledge to cut methane emissions.

The federal government is preparing to begin community consultations on potential exploration activities spanning new parts of Western Australia’s Bonaparte, Browse and North Carnarvon basins and Victoria’s Gippsland Basin, which oil and gas companies have identified as areas of interest. 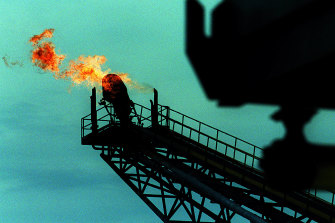 The International Energy Agency this year warned the world must avoid developing any new oil and gas fields in order to keep global warming to 1.5 degrees.Credit:James Davies

The launch of the annual process for releasing offshore acreage comes as Australia declined to join a pledge by 80 nations at the COP26 climate summit this week to cut methane emissions, much of which are generated from oil and gas production.

Methane, a potent greenhouse gas, accounts for about half of the 1 degree net rise in global average temperature since the Industrial Revolution.

The methane agreement – spearheaded by the United States and European Union – covers six of the world’s 10 largest methane emitters and is among the most substantial achievements from this week’s COP26 climate summit in Glasgow to date.

“One of the most important things we can do in this decisive decade – to keep 1.5 degrees in reach – is reduce our methane emissions as quickly as possible,” US President Joe Biden said.

Environmental advocates on Wednesday described the push for new fossil fuel exploration along Australia’s coastline as “callous and cynical”.

“This is an attempt to broaden the footprint of fossil fuels, while Scott Morrison and Angus Taylor attempt to make friends in Glasgow,” Wilderness Society WA campaigns manager Patrick Gardner said.

“The mindless creep of fossil fuel expansion is being pushed onto communities that do not want it”.

The launch of community consultations – after which exploration companies must bid for a release and be assessed as a deserving applicant – comes amid growing warnings against ramping up production of planet-heating fossil fuels.

In the lead-up to COP26, United Nations secretary-general Antonio Guterres said the latest Intergovernmental Panel on Climate Change (IPCC) report on the dramatic effect of human-induced climate change “must sound a death knell” for fossil fuels “before they destroy our planet”. The International Energy Agency has calculated that no new oil and gas fields can be developed in order to keep the planet’s heating within 1.5 degrees.

Supporters of gas, including the Morrison government, describe it as a necessary “transition fuel” in the green power shift, as a comparatively less-emitting alternative to coal that can keep energy reliable and affordable in periods when weather conditions for wind and solar generation are unfavourable. Gas is also used as a raw material in a range of manufacturing processes.

But the fossil fuel’s future is increasingly under question, with scientists and climate advocates arguing gas remains a heavy source of emissions and its role must be urgently reduced not expanded.

The IEA said the odourless, invisible gas is the largest component of energy sector emissions and some of the biggest emitters joined the pact including Brazil, Indonesia, Pakistan, Argentina, Mexico, Nigeria, Iraq, Vietnam and Canada.

But heavy methane polluters including China and Russia have not signed up.

Prime Minister Scott Morrison said last week he had “made it very clear” Australia would not sign the 2030 pledge, ahead of COP26.

The National Farmers Federation president Tony Mahar welcomed the federal government’s move, arguing that agriculture would be unfairly impacted with tighter emissions targets than other industries.

There is no case to provide greater focus on methane from livestock,” Mr Mahar said. “Australian agriculture has the runs on the board. The red meat sector alone has cut emissions by 56 per cent since 2005.”

Climate Council head of research Simon Bradshaw criticised the move and said “Australia is coming dead last in the most important race humanity has ever faced”.

“Limiting methane emissions is one of the most important things we can do right now to slow the rate of warming over the coming decades,” Dr Bradshaw said.

Another major achievement at Glasgow came with the agreement from 40 nations including Australia, which together generate 40 per cent of global GDP, committing to collaborate on clean technology to replace carbon-intensive industries like steelmaking and power generation.