The video gaming community has exploded during the pandemic, with twice as many Australians broadcasting on Twitch than this time last year.

Twitch is a streaming website where people play video games (or participate in other activities) while others watch and communicate in an online chat window. It's free to view but people can pay for perks, or just because they want to support a content creator that they enjoy. 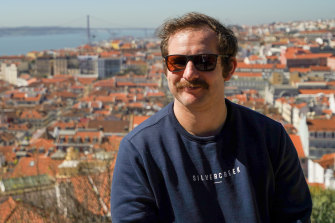 Australian streamer Paul ‘Pestily’ Licari has raised over a million dollars for charity in 2020, several months ahead of schedule.

On average, there are more than 1.5 million people tuning in to Twitch around the world, with an estimated 17.5 million daily average visitors.

The number of Australian streamers making money from Twitch has also increased by 350 per cent in the past two years.

Paul Licari – known online as Pestily – plays video games full-time, while others watch. He hit his 2020 fundraising goal five months ahead of schedule, raising $1.1 million for the Starlight Children's Foundation between January and July.

After serving eight years as a rifleman in the Australian Army, Mr Licari has been streaming video games on Twitch full-time since 2018, where he's amassed over 600,000 followers.

"I was thinking maybe around October to December, we should hit [the fundraising goal]," Mr Licari said.

"Then I did a charity event, in I want to say in April – and this probably would have been when COVID started really kicking in. And we raised $264,000 in 16 hours.

"That's when I was like, this is happening, you know, like this has some serious momentum behind it."

Beyond gaming, talking with streamers has been a refuge for a lot of people – particularly young males – who are deprived of human contact due to the lockdown.

"A lot of people think it's just gamers playing computer games, it's really not – it's all about community," Mr Licari said.

One recent message from a subscriber came with a note saying: "Thanks for all you do, your streams helped me through some rather lonely times."

"It's a little bit humbling," Mr Licari said. "I know what it's like to go through tough times. And sometimes it's just nice to someone – even if I might not be your best friend, I'm a bloke that can just have a chat with you."

Twitch's head of engagement for Australia and New Zealand Lewis Mitchell said that without the interactivity, the platform would be nowhere near as successful.

The top 10 games streamed on Twitch (in no particular order)

"You find particular communities that you really enjoy, stick around, you talk to the same community members and you kind of, you know, pick two or three of those communities to hang out in."

Mr Mitchell said that in particular, newly-popular games where streamers could play with their audience such as Among Us and Marbles on Stream had helped to strengthen those relationships.

"I know that for some people the Twitch streams they visit are their everyday thing," said James "CripsyTV" Williams – who goes by the username CripsyTV online.

"That's the beauty of it – they could be dealing with their own problems anywhere in the world but it brings people together."

The 27-year-old streams every day from his home in Craigieburn, in Melbourne’s north. After falling in love with the FIFA football franchise with FIFA: Road to World Cup 98, two years ago he has made it his full-time job. 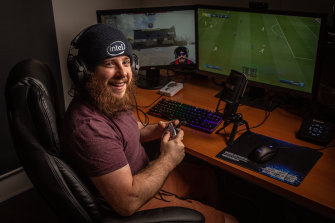 Gaming was a competitive outlet for him from a young age with a medical condition, osteogenesis imperfecta, preventing him from playing contact sports.

"Gaming kept me connected with friends," he said.

He dabbled in streaming for the first time in 2013-14, before returning in 2017. After competing in the first season of the E-League, a competition for Australia's best FIFA players, he returned to streaming and has made it his life.

"There's a core audience who has grown pretty deep to my stream, who are there every day and roughly what time of day I go live just because they enjoy the community we have."

His average monthly viewership has tripled during lockdown, and his channel has had an increase in paid subscribers and revenue each month since March.

In August, he said his stream's chat received more messages than ever before.

Sometimes, they don't play games at all. He spent hours last week opening packs of trading cards for English Premier League and AFL players. Twitch said that non-gaming content on the platform has quadrupled in the three years. 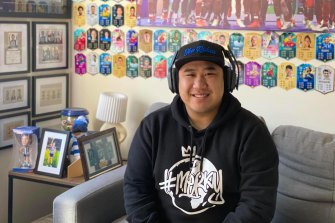 Vernie Valentos has been streaming on Twitch twice a day since being stood down from his job as a result of the coronavirus pandemic.

"Usually it's silly banter but for some people, that's what they want or need. And if I can provide a place for that and all I'm doing is having fun, I feel like I'm unstoppable."

Vernie “BlueRukus” Valentos, 27, was working in car rental sales before the lockdown, and has been streaming twice daily for several months – he said it's a reason for getting out of bed at the moment.

"I was doing nothing at home, or doing something that doesn't require thinking," the western Melbourne local said.

"With Twitch I can be creative – it just gets my mind going. It helps me connect with people outside this house. Even it's just text on a screen, it's still real."

He said that he'd always wanted to try streaming, and has built a steady audience over the past few months.

"You don't expect people to say things like that, but I can see what they're talking about because I've felt the same way at times."