Many people were shocked when Anthony Hopkins won the 2021 Oscar over frontrunner Chadwick Boseman, including Hopkins himself.

In a new interview with “Lorraine,” Hopkins recalled his reaction to winning the Best Actor award, admitting that he “didn’t expect” it.

The 83-year-old actor didn’t attend the ceremony. In fact, Hopkins — who was on vacation in Wales — was asleep when the award was given out. 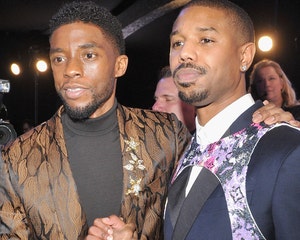 “Well, what happened very briefly…I didn’t expect to get it, at all,” he recalled. “The main contender was Chadwick Boseman.”

Hopkins continued, “So I went to bed and the buzzer on my phone went [off] and it was a text from my agent [saying], ‘You’ve won the Oscar.’ It was about 5 o’clock in the morning.”

The morning after, Hopkins — who wasn’t even allowed to Zoom into the ceremony to give an acceptance speech — posted a video to his social media to accept the award. He also honored Boseman, who passed away in August 2020 following a private four-year battle with colon cancer.

“The next morning I made a little speech of thanks to the Academy and a tribute to Chadwick Boseman,” Hopkins said, before reiterating, “I really didn’t expect it. It was a shock.”

Hopkins won the Best Actor Oscar for his role in “The Father.” At 83, he became the oldest Best Actor winner in Academy Awards history. The win marked Hopkins’ second Oscar. He previously took home the prize for the same category back in 1992 for “Silence of the Lambs.”

The 93rd Oscars took place in Los Angeles’ Union Station, in addition to multiple locations around the world.

Rather than give out the Best Picture award last as in previous years, the 2021 ceremony featured a switcheroo, with Best Actor being presented as the final award. The creative decision received widespread backlash as it seemed like Academy Awards were building to a closing moment to honor Boseman, who was nominated for his performance in “Ma Rainey’s Black Bottom.”