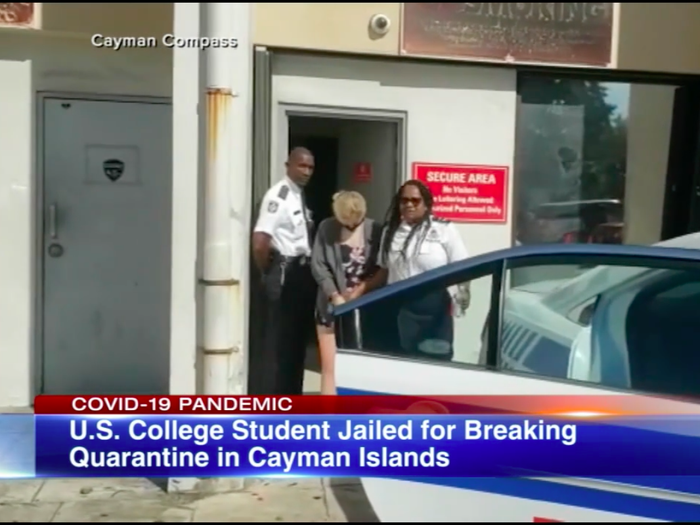 On December 22, the court heard the appeal for Skylar Mack, an 18-year-old Georgia student, who was sentenced to four months in prison on the Cayman Islands for breaking a 14-day quarantine.

After hearing the appeal, the court lowered her sentence to two months, according to the Cayman Compass.

As Andrel Harris reported for the Cayman Compass, the couple's attorney Jonathon Hughes appealed on the grounds "that the judge did not put fair weight on the circumstances that included Ms. Mack and Mr. Ramgeet's case and that the judge put undue weight on matters such as public outrage and fury."

"We note that the court allowed our appeal and agreed with our submission that the four-month sentence imposed by the grand court was not appropriate in the circumstances of this case," Hughes shared in a statement sent to Insider.

The Cayman Islands have reported 316 cases and two deaths since the start of the pandemic, according to a tracker on their government website.

On November 29, Mack attended a jet-skiing competition, just two days after arriving on the island

The Mercer University student flew to Grand Cayman on November 27. Upon arrival, she was required to quarantine for 14 days.

According to Hughes, Skylar Mack tested negative for the virus after arriving on the island. After two days in quarantine, Skylar Mack removed the government-issued tracking device and left her hotel to attend her boyfriend's jet-skiing competition.

At the competition, event organizers were notified of Skylar Mack's rule-breaking and police were called to the scene, Hughes told Insider in a statement.

She was charged with leaving her home during the mandatory 14-day quarantine. Ramgeet was said to have "aided and abetted her in the breach."

Initially, the couple was sentenced to community service and a fine

This is the second resentencing for Skylar Mack and Ramgeet.

In early December, Skylar Mack and Ramgeet both pleaded guilty and received an initial sentence of 40 hours of community service and a $2,600 fine each.

But the Cayman Islands director of public prosecutions, Patrick Moran, appealed the sentence because it was "unduly lenient" on December 8.

A judge ruled in favor of Moran, and on December 15, Skylar Mack and Ramgeet were resentenced to four months in prison.

"This was as flagrant a breach as could be imagined," Grand Court Justice Roger Chapple told the court, according to the Cayman Compass. "It was borne of selfishness and arrogance."

The case made headlines, and Skylar Mack's family pleaded to President Donald Trump for help.

"She just wants to come home," her grandmother, Jeanne Mack, told the Today show before the appeal. "She knows she made a mistake, she owns to up to that, but she's pretty hysterical right now."

Skylar Mack and Ramgeet's appeal was successfully reduced on December 22, but the reasoning behind the decision is unknown, according to the Cayman Compass.

"Whilst it was our hope that Skylar would be able to return home to resume her studies in January, we accept the decision of the Court and look forward to receiving its written reasons in due course," Hughes said in a statement sent to Insider.

A day before Skylar Mack arrived on the Cayman Islands, the territory adjusted its penalties for breaking the 14-day quarantine.

This has lead Jeanne Mack to believe that the islands are trying to make a "statement" of her granddaughter, Jeanne Mack told Fox News.

While Skylar Mack and Ramgeet are reportedly the first to be prosecuted under these harsher penalties, they aren't the first to break the islands' COVID restrictions.

Last month, two Canadian travelers, Pascal Terjanian, 52, and Cristina Gurunian, 34, left the mandatory 14-day quarantine. According to the Cayman Compass, each person was fined $1,000 and banned from returning while COVID-19 restrictions are in place.

A total of six cases of a breach of quarantine have been reported.