Alex Sagal calls it “surgery on the mind”. Ten days of silent meditation, no phones, no eye contact.

“You really need to experience it to feel it, but you finish the 10 days and you are really relieved, happy, taking things in a lighter way. That’s why it takes time to come back to reality,” he says.

He returned to reality last Sunday, with hundreds of messages awaiting him – from friends around the world, his mum in Spain, grandma in Belgium and a friend from Sydney, saying he’d cancelled his flight to join Mr Sagal in Tasmania for a holiday. 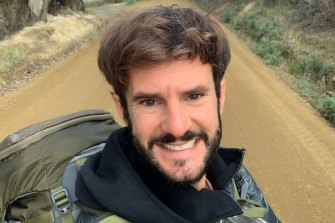 Israeli traveller Alex Sagal did a 10-day silent meditation in Tasmania and emerged into a changed world.

“For the world to be in a global crisis and in lockdown … the first couple of days I thought let’s not stress, let’s calm down. I didn’t realise how big the crisis was,” he said.

“I was thinking people were overreacting, that my friends who sent me so many messages were stressing out too much. Then step by step, I saw ‘OK, we are facing a big thing here’.”

It had increased more than tenfold to 1352 by the time he re-entered the world. Tasmanian Premier Peter Gutwein had also introduced the “toughest border measures in the country”, compelling those entering the state to self-isolate for 14 days.

Contestants are not usually told any news of the outside world during filming, but in this case the show’s executive manager informed housemates of the pandemic a fortnight ago. They were “shocked, as most people would be learning the news about a worldwide pandemic”, host Sonia Kruger said. Some or them won’t re-enter the world for months.

Canada’s Big Brother contestants speculated on why there was no live audience last week – prompting producers to step in and inform them.

Mr Sagal, now in an almost empty youth hostel in Hobart, has no idea when he could return home to Tel Aviv – the flight he had booked for May 15 is cancelled, with few alternatives available.

“I don’t regret the meditation camp at all. I think nobody could think it would escalate so quickly and so globally,” Mr Sagal says.

“But I don’t know if management took the right decision not to tell us and not to stop the camp. Someone like me, it was already too late when it finished for me to go back to my home country.”

"There are worse places in the world to be trapped,” he says, though some notice would have helped.

“I was planning to stay for two weeks. I packed summer clothes but the winter is coming – and I read about what winter in Tasmania can be like.”