Aged care workers could be forced to get vaccinated against COVID-19 if they want to continue working in the sector, as the federal government scrambles to immunise residents and workers in the face of accusations it has failed to protect older Australians.

More than three months into the vaccine rollout, a quarter of Australia’s aged care facilities are still waiting for second doses, while six homes have still not received any vaccines. The Victorian outbreak grew to 54 active cases on Monday, including two aged care workers and a 99-year-old resident in two different facilities. 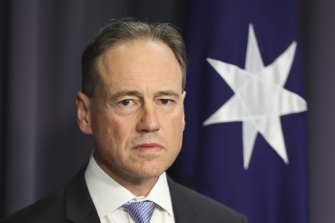 Health Minister Greg Hunt said the AHPPC has been asked to review its decision to not mandate COVID-19 vaccines for aged care workers.Credit:Alex Ellinghausen

But Labor says the federal government has failed to protect the most vulnerable given vaccinations for aged care and residential disability residents were meant to be completed by Easter, and there were no longer vaccine supply issues.

Health Minister Greg Hunt said the Australian Health Protection Principal Committee has now been asked to review its decision to not mandate COVID-19 vaccines for aged care workers. National Cabinet will also consider the move when it meets on Friday.

He defended the government’s hotspot rules put in place to prevent aged care workers moving between homes, which stopped applying once community transmission was no longer a risk in those areas.

“It’s only in the last week that we have seen that community transmission,” Mr Hunt said on Monday. “This is a very recent, but rapid phenomenon.”

Opposition health spokesman Mark Butler said the government could no longer blame supply issues on the speed of the vaccine rollout.

“The public health advice was very clear about the utter importance of fully vaccinating this group of 200,000 older Australians as soon as possible. The question was one of logistics, and the government has utterly failed at that,” he said.

Mr Hunt said about 85 per cent of aged care residents across the country have chosen to be vaccinated.

“Every day, we’re pushing to make sure that as many people are vaccinated as possible,” Mr Hunt said.

The federal government had now started funding aged care providers across Melbourne so staff can only work at one site. The move was first taken last year to prevent the spread of COVID-19 within aged care facilities, but the rules lapsed once areas around the nation were no longer designated as hotspots.

Mr Hunt said the move to limit aged care workers to single work sites was triggered by the federal hotspot declaration, announced by Chief Medical Officer Professor Paul Kelly on Thursday. He said the hotspot declaration is linked to the number of cases on the ground.

“I believe that the Chief Medical Officer moved [to declare a hotspot] at an earlier time. In his view, he did not want to wait for the predetermined figure, and so he acted once he saw that in Victoria there was the possibility of considerable community transmission,” Mr Hunt said.

Asked why that hotspot declaration was not made earlier in the outbreak, the minister said it was based on the medical advice of what was appropriate at the time. He also pointed out that in greater Melbourne about 4.7 per cent of aged care staff have worked across different sites.

Labor’s aged care services spokeswoman Clare O’Neil said before the government decides to make vaccines mandatory, it had to have a clear plan for vaccinating all aged care workers.

“What everyone wants to see is clear targets put in place for this crucial area of our workforce,” she said on ABC’s Afternoon Briefing on Monday afternoon.

“What is the point of vaccinating hundreds of thousands of aged care residents, when the people who are coming in and out of the facilities every day have not been vaccinated?”

Last week more than 630,000 Australians were vaccinated, taking the national total of doses administered to more than 4.24 million.

In January, the federal government also declined to extend the worker mobility reduction payment initiative for disability workers despite a formal request from the Victorian government because of the imminent start to the vaccine rollout.

The then-National Disability Insurance Scheme minister Stuart Robert told his Victorian counterpart in January that disability workers would receive vaccinations through in-reach services coordinated by the federal Department of Health in phase 1a of the rollout.

“As the state of disaster declaration for Victoria has been lifted, and the forthcoming vaccine rollout, I do not consider the reinstatement of the [worker mobility reduction payment initiative] for NDIS providers necessary,” he wrote at the time.

Stay across the most crucial developments related to the pandemic with the Coronavirus Update. Sign up to receive the weekly newsletter.