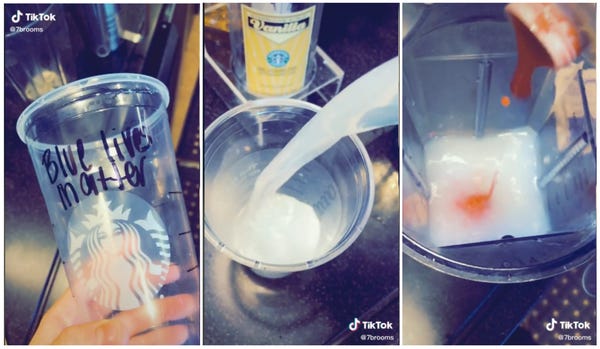 A Starbucks barista who made a "Blue Lives Matter" beverage in a satirical TikTok video that went viral was terminated from his position, according to a representative for Target, which housed the employee's Starbucks location.

The video is soundtracked by a song called "All I Want for Christmas Is More Dead Cops."

The Target representative said that TikTok has removed the video for violating its rules against advocating for violence, but as of Thursday afternoon, the video appeared to still be available on the app.

The news was first reported by The Daily Dot. The TikTok user did not immediately return Insider's request for comment through social media platforms.

In a statement provided to Insider, the representative said that the employee was fired from the Indianapolis-area location because the video was "appalling and unacceptable."

"We don't tolerate this behavior at Target, want all guests to be treated with respect," the statement continued, confirming that the employee was fired. The Target representative said the company believed that the employee did not actually use real bleach in the video and that he did not serve the beverage to guests.

The satirical video included the #ACAB hashtag in the caption, which stands for the saying "all cops are bast-rds," a phrase used on social media particularly in discussions of police violence. It was previously a popular hashtag on the app, but has since been banned by the platform, meaning users can type it in a caption but navigating to the hashtag's main page yields no results.

The incident highlights the tension between law enforcement officers and protesters of racial violence who seek structural police reform or abolition in the US. Nationwide Black Lives Matter protests against police brutality have continued since the killing of George Floyd in May. Renewed calls to action have spread across the US after Jacob Blake, a Black man in Kenosha, Wisconsin, was shot seven times in the back by a police officer on August 23.

The video was picked up by Law Enforcement Today, an online publication about law enforcement officers, calling the barista "twisted."

Several employees have reportedly lost jobs as a result of viral TikTok videos. A former Chick-fil-A employee from California recently told Insider that she was fired after a video she made about menu hacks at the restaurant chain went viral on TikTok.