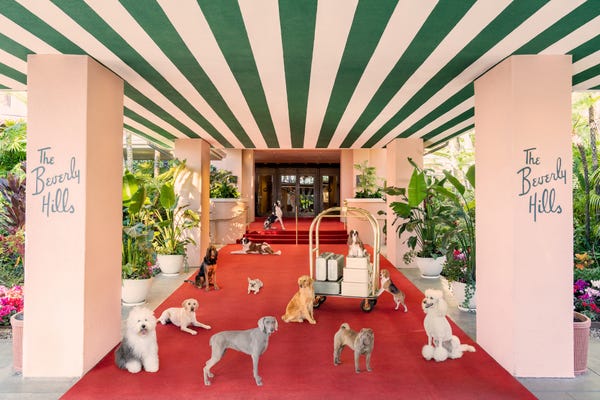 Gray Malin is a photographer based in West Hollywood, California. 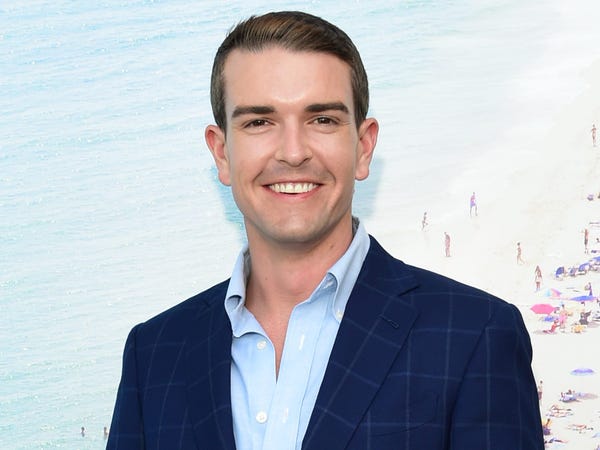 Malin, who is originally from Dallas, Texas, took his first photography class in high school.

After years of taking photos with a film camera, Malin eventually switched to digital photography, which is the medium he used for his new series, "Dogs at the Beverly Hills Hotel."

One of Malin's famous photo series is "Prada Marfa" from 2010, where he captured a freestanding Prada store in Valentine, Texas, pictured in front of a cotton-candy sky.

Malin's latest series, "Dogs at the Beverly Hills Hotel," shows a world in which dogs are guests and staff at the iconic hotel. 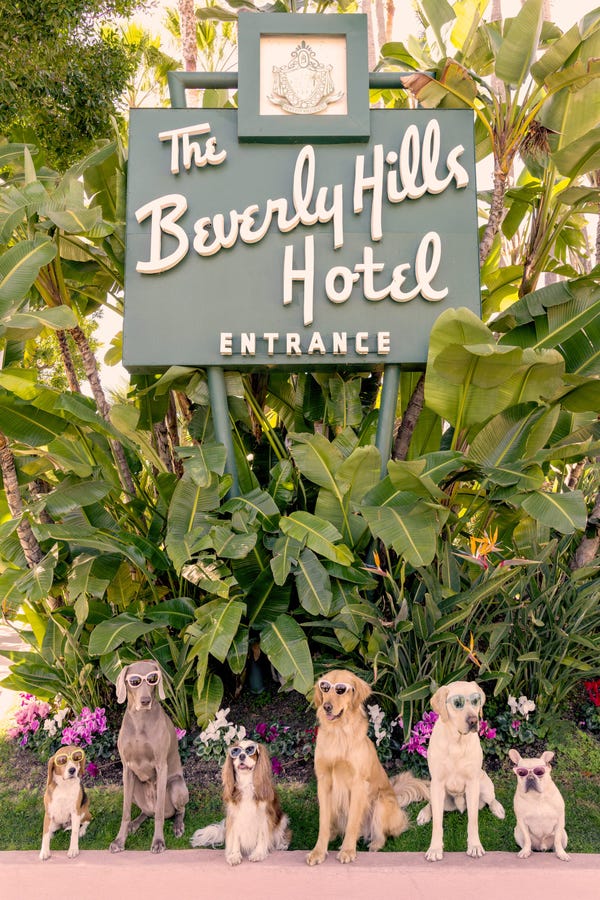 Malin captured the series in January, and it launched in a virtual exhibition on September 29.

The Beverly Hills Hotel in California, which opened in 1912, is famous for appearing in movies and hosting celebrities. It was notably featured in the 1956 movie "Designing Woman" and the 1963 film "Move Over, Darling."

More recently, Prince William and Kate Middleton stayed at the hotel following their marriage in 2011, according to BBC America.

Malin has long been inspired by the Beverly Hills Hotel's air of old Hollywood glamour. 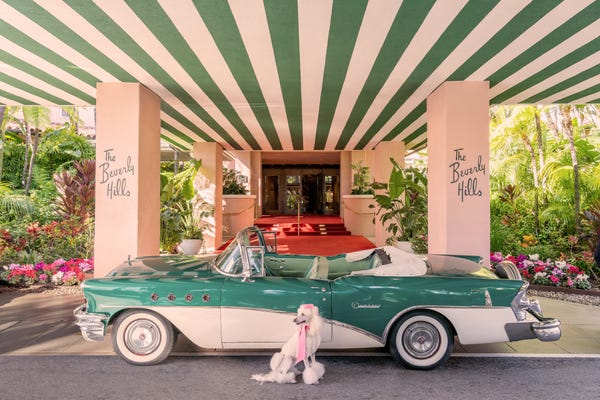 "I was personally inspired by the timeless nature of the property and its uncanny ability to transcend time," Malin said.

The hotel reminds him of the '50s and '60s, the decades in which his grandparents were young.

"I was very inspired by travel pictures of my own grandparents who lived during a more formal, jet-set era," he said.

It's also not the first time Malin has used the Beverly Hills Hotel as a photo backdrop. 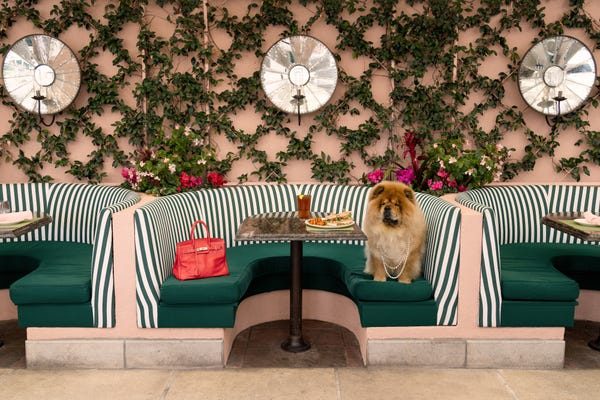 In 2018, Malin captured his first photo series at the hotel, which included models styled in '50s and '60s attire and posing with vintage luggage and cars.

Malin found that the most popular photos from that series included dogs — and that gave him the idea to return to the location for a canine-themed photo collection.

The collection includes 22 different dog breeds and captures the pets living their best lives around the hotel.

Malin wanted to photograph locations that viewers might recognize from films and celebrity sightings, like the hotel entrance walkway, pictured above.

"We specifically focused on the main entrance, the driveway with the Beverly Hills Hotel sign, the front sign off the street, the pool, the cabana, and the fountain room," he said.

Despite how relaxed many of the dogs look in Malin's pictures, there was a lot of work that went into each photo. 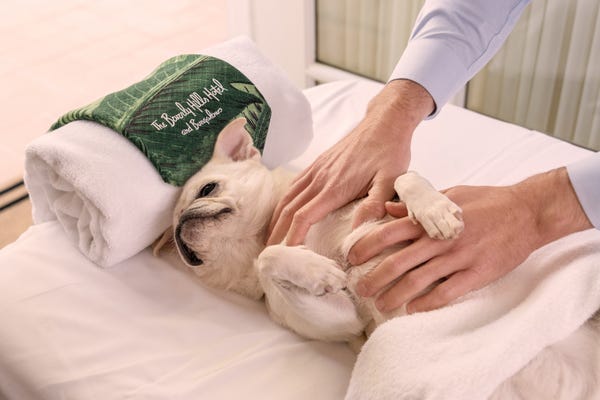 Malin worked with a dog trainer who helped him cast each pup. Many of the dogs were selected for their specific skills or traits that made them a good fit for the photos Malin had in mind.

"We needed a small dog that was comfortable on the water for a pool shot, so we cast a pug that was famous because they can surf on a surfboard with the owner," Malin said, referencing one casting example.

It also wasn't always easy to get the dogs to pose with accessories. 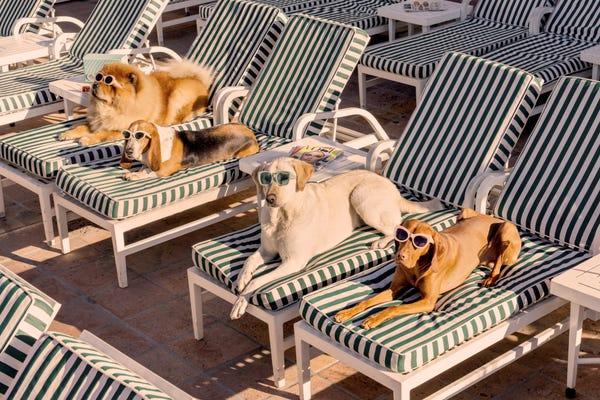 "It was always hard to get the dogs to wear things, like when we had the sunglasses gently on their faces, as soon as the dog would turn its head they would fly off," Malin said.

He added: "I think the dog trainer and the owners were so professional and incredible that it made our job a lot easier than you'd think when you see these images."

Some of the pictures were later edited to add in meals and drinks, which prevented the pups from eating human food on set. 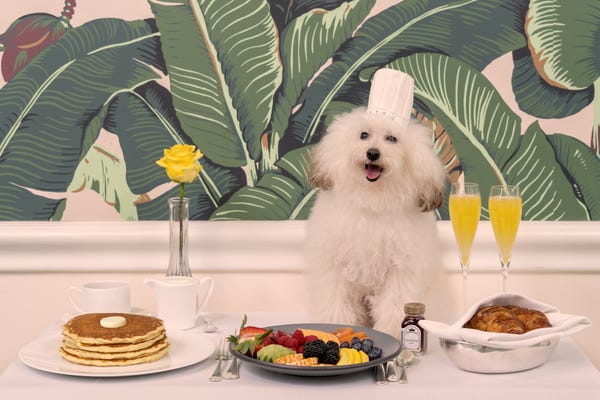 For images like "Bone Appetit," pictured above, the food was not present on the day of the photo shoot.

To keep dogs from eating the edible props, Malin used editing tools to add in dishes and drinks after the photos were taken.

Malin's favorite photos are ones where the pups seem to take on human-like qualities. 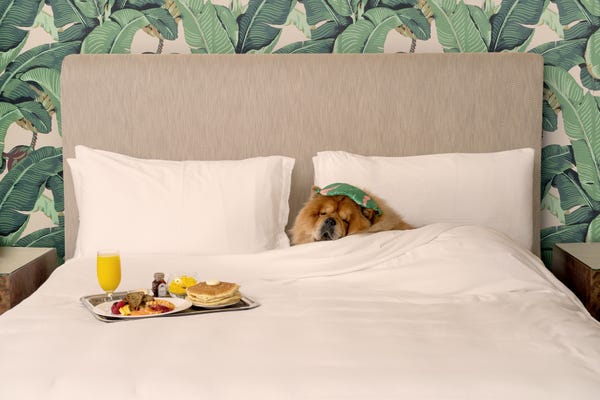 One of his favorite shots was "Breakfast in Bed," which is pictured above.

"The chow chow — when it was in the bed — was just so funny. It has so much attitude and that's just what it looks like in real life," Malin said.

Malin got almost all the props, including the vintage cars and luggage, from Hollywood movie houses. 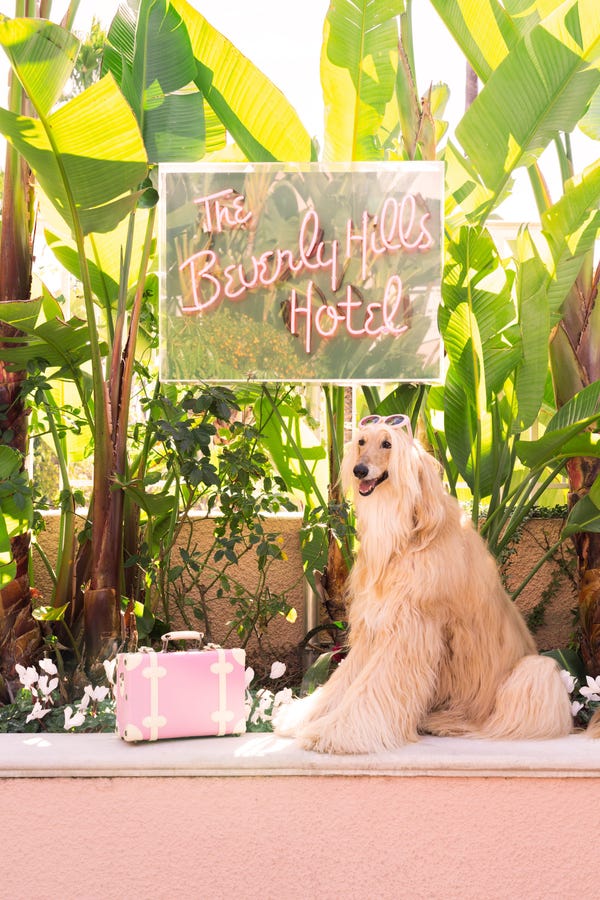 Malin said that the photo shoot reminded him of a movie production, especially because many of the accessories and objects were from film studios.

"It was sort of like producing a miniature movie with actors, props, wardrobe, stylists, hair, and makeup," he said. "We had all these fabulous props we pulled from prop houses, from the Warner Brothers Studios to Paramount."

Each prop used for the hotel photo series dated back to the '50s and '60s.

The photo series even featured a custom dog outfit created by a costume designer from "Legally Blonde." 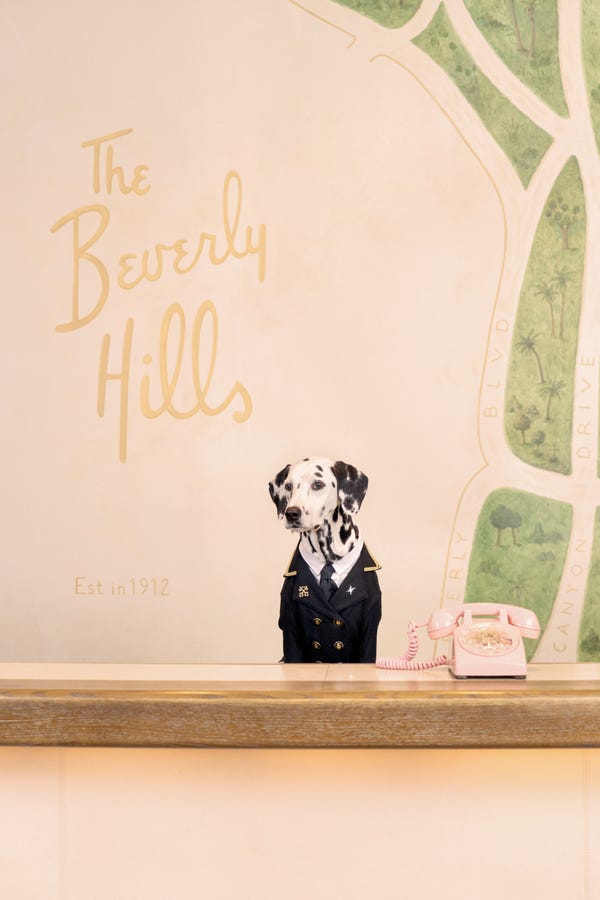 "The Concierge," pictured above, shows a dalmatian at the hotel's front desk wearing a realistic-looking concierge suit.

"This outfit was custom-made by the woman who did all the clothing for the 'Legally Blonde' movie franchise, and it was fitted to the dog and mimicked the Beverly Hills Hotel concierge's outfit," Malin said.

Malin believes capturing dogs around the iconic hotel is a "winning combination of pure happiness." 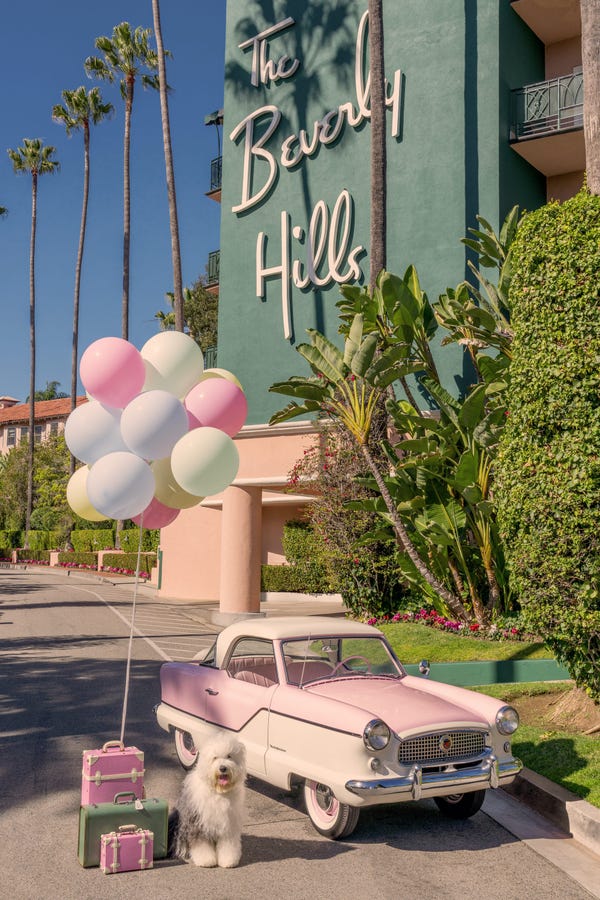 "Dogs are beloved, just like the iconic hotel itself," Malin said.

He added that his dog-centric photo series plays into his goal of creating work that all viewers can enjoy.

"When I started my journey as an artist, I found the art world to be rather cold and exclusive, so I set out to make work that felt warm and welcoming — that everyone should be invited to celebrate," Malin said.

View all the photos from "Dogs at the Beverly Hills Hotel" here.