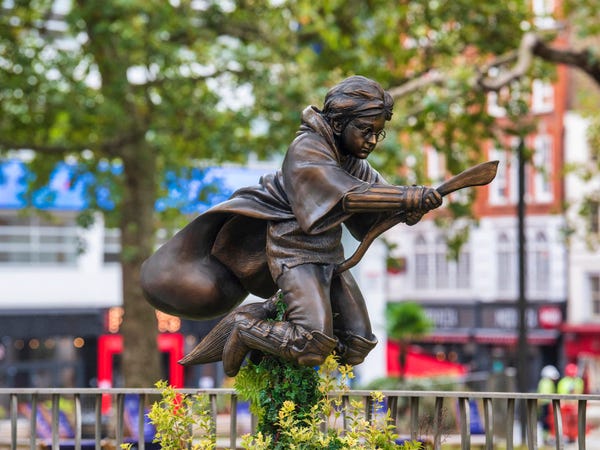 You might notice an extra dose of magic while walking around London.

According to Reuters, a brand new statue of Harry Potter flying his Nimbus 2000 was unveiled last week in London's Leicester Square.

London is chock-full of tributes and experiences dedicated to the mega-successful book and film franchise, "Harry Potter." Potterheads all over the world flock to London for photo opportunities — including posing at a trolley that's halfway disappeared into a wall at the fictional Platform 9 and ¾ at King's Cross Station, a trip to the "Harry Potter" studio experience, or even a stay in "Harry Potter"-themed hotel rooms.

"'Harry Potter' is hugely important to literature, theater and, of course, to film," Ros Morgan, chief executive at Heart of London Business Alliance, said in a statement to Reuters. "We know there are fans of 'Harry Potter' of all ages all around the world and we look forward to welcoming them to the West End and Leicester Square, whenever that will be."

London's West End is home to the premiere of the stage play "Harry Potter and the Cursed Child," which has since toured around the globe.

According to Reuters, London's Leicester Square is also famous for paying tribute to other iconic British characters with bronze statues, including Mary Poppins, Mr. Bean, and Paddington Bear, as part of the city's Scenes in the Square trail.

Naturally, "Harry Potter" fans both young and old can enjoy this new attraction. Be prepared for lots of selfies and photos from your friends if they ever visit London.