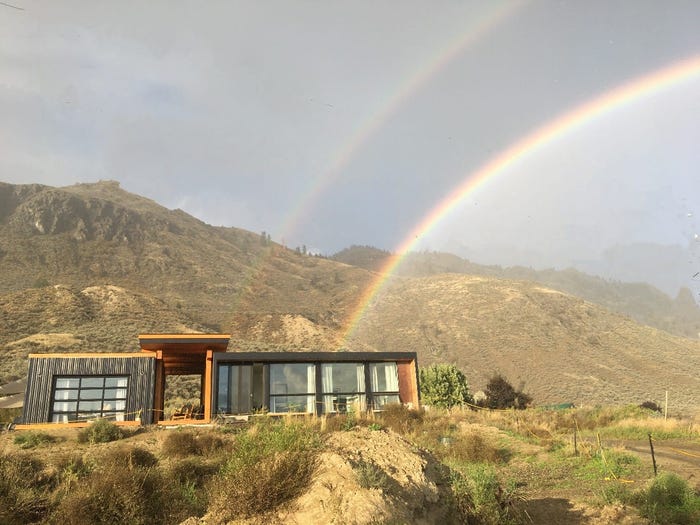 Tiny houses are often built out of recycled materials, but shipping container homes kick that practice up a notch.

Cathi and Trevor Marshall loved the idea of reducing their carbon footprint by living in a recycled home, so they built a tiny house out of four shipping containers. The house is located on an oasis in Canada that includes an outdoor kitchen and a guest house.

Take a step inside the Marshalls' modern home and see how it gave shipping containers a second life.

After raising their children, Cathi and Trevor Marshall decided it was time to downsize from their traditional 2,400-square-foot house in Canada to a smaller home. 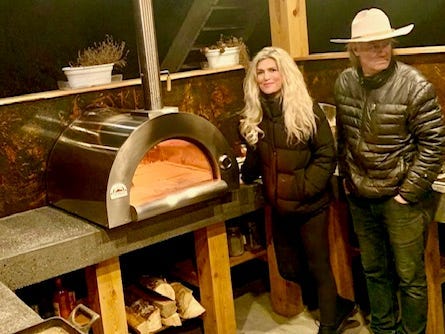 Cathi's family bought "30 acres of land 30 years ago" in British Columbia, Canada, and she always had a parcel of land to do with what she wished. When her two sons moved out in 2017, Cathi and Trevor finally decided to take advantage of that empty lot.

"I had been to Austria, and I saw shipping container homes and apartment buildings, and I thought it was an amazing architectural design and obviously the sustainability of it was intriguing. To take them from what they are and turn them into something beautiful was appealing," Cathi said. "We took off from there."

In just three months, the couple had a finished house built from shipping containers. 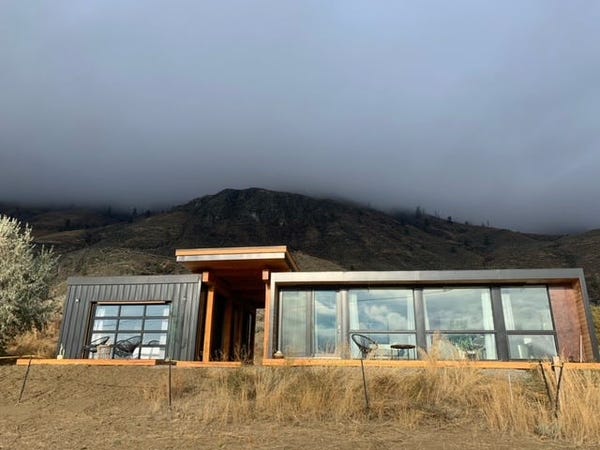 Cathi chose to work with a company that gave her limited options in terms of design and aesthetics.

"It took all the stressful choosing out of it and I liked the minimalism of it," she said. "It made it so easy."

In the end, she chose a black exterior and a white interior with grey floors. The couple also designed a guest house, which is connected to the main house via a breezeway.

The Marshalls live full-time in the house, which is made from four, 20-foot shipping containers. 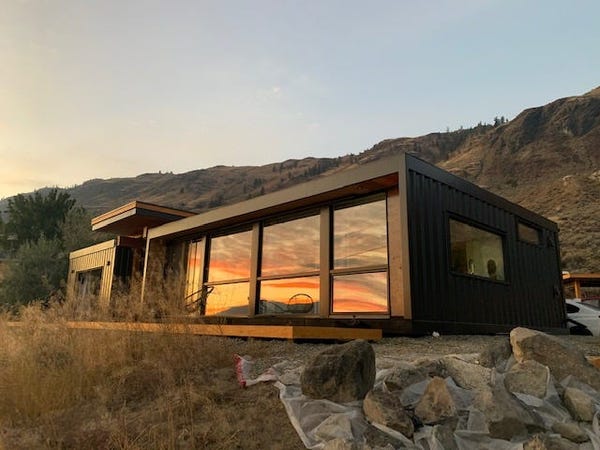 They spent $136,000 on the 704-square-foot container home, not including the attached guest house.

You enter the modern home through a covered, multifunctional breezeway. 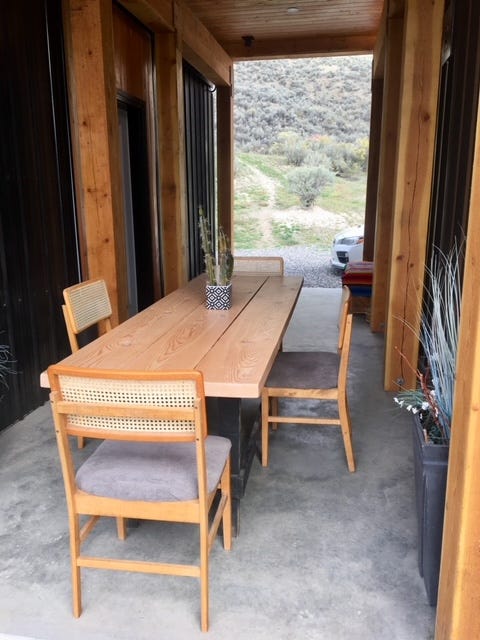 "It's perfect for dining al fresco or cooling off in the summer months," Cathi said. "We really wanted to live a lifestyle with a relatively small footprint and really connected to nature — where we can step outside and [be in] the landscape and really take advantage of the summer desert climate that we have here in British Columbia. We do experience all four seasons, so it's not uncommon to have snow in the breezeway."

The open-concept home also has floor-to-ceiling windows that look out on the surrounding nature. 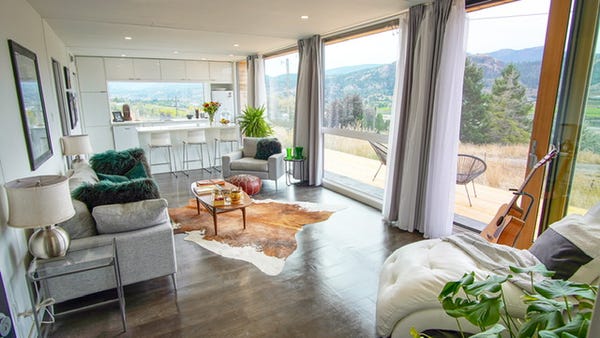 "I walk into the living room and can look all the way through to the kitchen window, so it's one big space," she said.

The central feature of the house is the floor-to-ceiling windows.

"The entire south-facing side of the house is all glass, so the landscape is the artwork," she said.

Plus, Cathi said she loves how the white interior and the large windows complement each other. 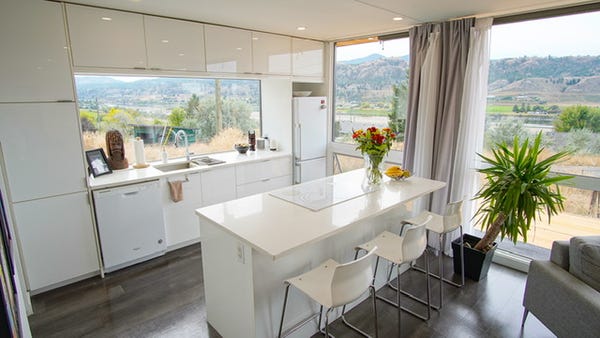 In the kitchen, a large, white island faces sleek, modern cabinetry that frames another window.

"I like the way it reflects light, and you can see so much of the exterior landscape, so I didn't want to take away from that," she said. "I thought a white backdrop would allow your eye to go toward the outdoors."

To the right, there are two smaller bedrooms and a bathroom. 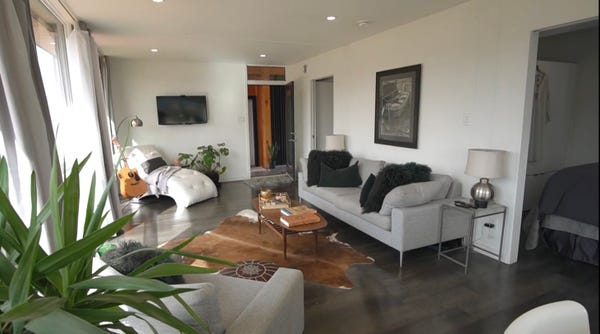 "It's fantastic. There are no regrets — none," Cathi said. "You realize that everything in this space has a purpose. If it can't fit, then it can't come in here. It makes me think about my purchases, what you need, and what you don't need."

On the other side of the breezeway is a studio space for guests. 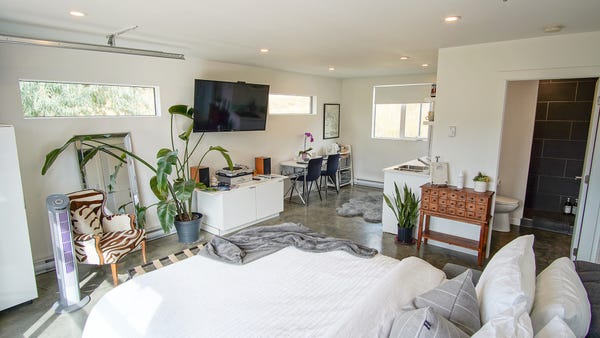 Cathi and Trevor designed and built the 450-square-foot space themselves and now rent it out on Airbnb for $90 to $200 per night. The suite has a large bed and an en-suite bathroom. Guests also have access to the home's outdoor amenities.

"I love sharing this space with guests," Cathi said. "Being able to have guests and break bread together is lovely."

On the property, there is a large outdoor kitchen where the couple and guests can hold parties during warmer months. 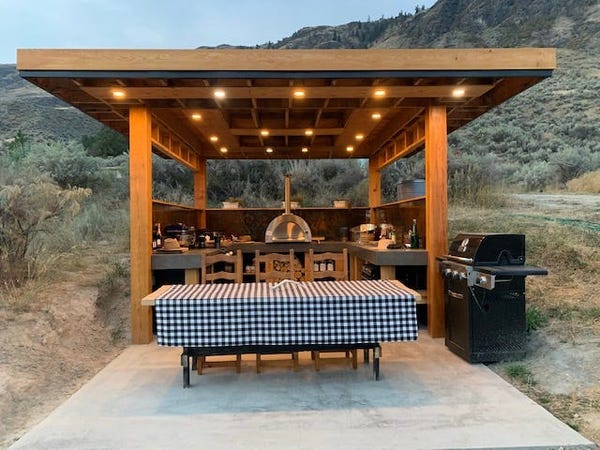 The outdoor kitchen has a wood-burning stove and a rooftop deck, which is accessible via a ladder.

Since nature is so important to their lifestyle, the couple also adopted a horse. 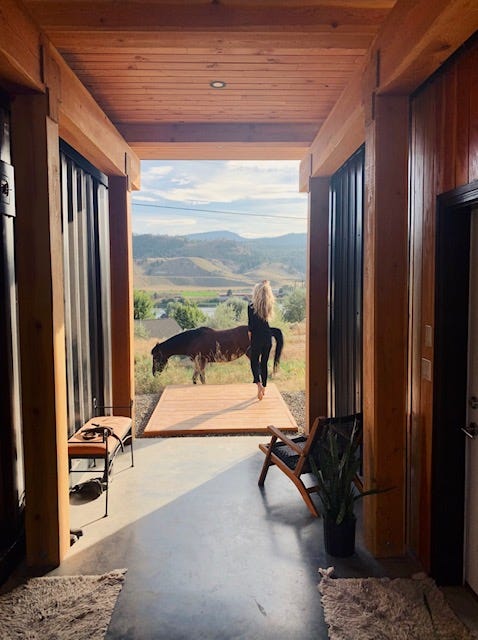 Cathi adopted the horse when she learned it had some issues and needed care.

"We don't ride her, so she's just a big cat," Cathi joked. "We have a lot of other wildlife here."

Beyond the wildlife, the Marshalls completely immerse themselves in the surrounding nature, which includes a hiking trail, a river, and a mountain range — all located in their backyard.

"This property was a vision of my father's, and I feel very blessed to live here and I love living amongst nature and all the wildlife," she said.

Although her home is bigger than a traditional tiny house, Cathi believes her house is still "small-space living." 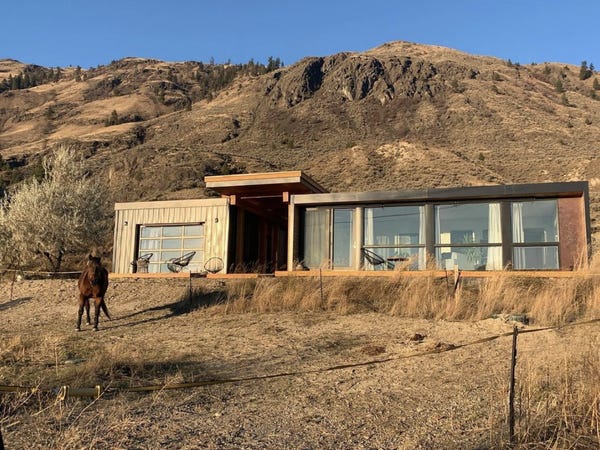 "This is a great way to live," Cathi said. "It takes a lot of unnecessary things out of your life. I'm totally blessed to live this lifestyle."