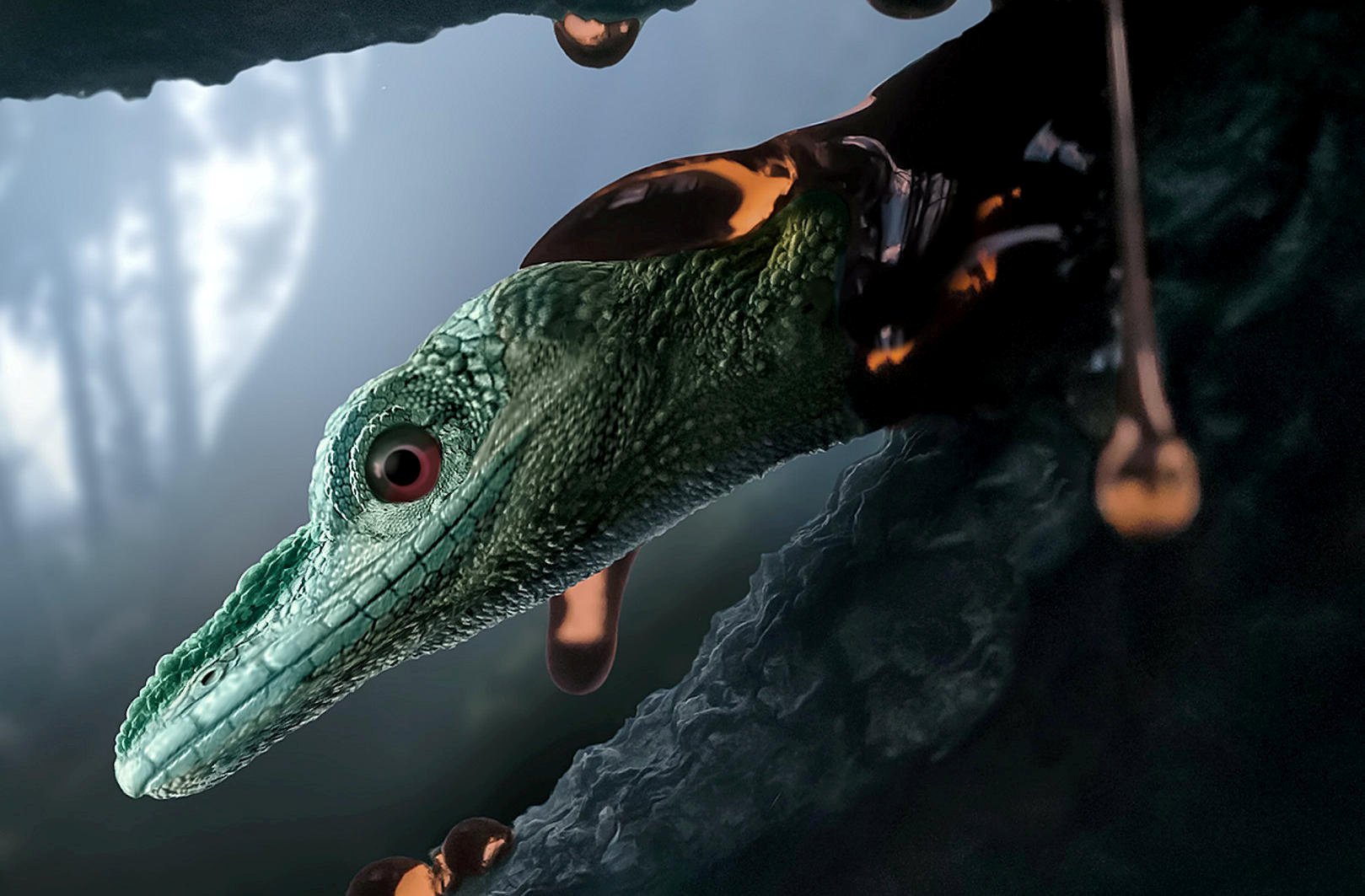 A bizarre lizard locked in Burmese amber for 99 million years has opened a new window into the ‘lost world of the dinosaurs.’

Its exquisitely preserved remains include the skull, teeth, scales, skin and soft tissue.

A raised crest running down the top of the snout can also be seen through the fossilised tree resin.

There is flap of loose skin under the chin, too. That may have been inflated when displaying to mates or warding off rivals.

Co author Dr Juan Diego Daza said: ‘It’s a really weird animal. It’s unlike any other lizard we have today. We think it represents a group we were not aware of.’

The bug eyed creature inhabited a tropical forest in what is now Myanmar during the age of the dinosaurs.

Its controversial identification as the smallest bird-like dinosaur was retracted last year.

An international team used CT scans to compare each bone in the two species digitally.

They became entombed in amber around the same time and place. The sticky sap is the superglue of the fossil record.

It can preserve skin, scales, fur, feathers or even whole creatures in near perfect condition. Whatever it touches is frozen in time inside.

The analysis uncovered a number of physical characteristics that earmark the tiny animals as lizards.

Oculudentavis naga is so odd it was hard to categorise without close examination of its features.

Its body was nearly three inches long, without the missing tail.

Lead author Dr Arnau Bolet, of the Miquel Crusafont Catalan Institute of Palaeontology in Barcelona, said: ‘The specimen puzzled all of us at first because if it was a lizard, it was a highly unusual one.’

Dr Daza examined the small, strange skull – and the short portion of the spine and shoulder bones.

He first suspected it was some kind of pterodactyl – or a primitive monitor lizard.

Dr Daza, a herpetologist at Sam Houston State University in Huntsville, Texas, said: ‘From the moment we uploaded the first CT scan, everyone was brainstorming what it could be.

‘In the end, a closer look and our analyses help us clarify its position.’

Major clues included the scales and teeth attached directly to the jawbone. A dinosaur’s would be nestled in sockets.

It also had lizard like eye structures and shoulder bones and a hockey stick-shaped skull bone.

This is universally shared among scaled reptiles, also known as squamates. Both species’ skulls had deformed during preservation.

Oculudentavis khaungraae was slightly bigger. Its snout was squeezed into a narrower, more beak-like profile.

The braincase – part of the skull that encloses the brain – was compressed.

Co-author Dr Edward Stanley, of the Florida Museum of Natural History’s Digital Discovery and Dissemination Laboratory, said: ‘Imagine taking a lizard and pinching its nose into a triangular shape. It would look a lot more like a bird.’

But the bird-like skull does not indicate it was related to our feathered friends.

Co author Prof Susan Evans, of the University College London, explained: ‘Despite presenting a vaulted cranium and a long and tapering snout, it does not present meaningful physical characters that can be used to sustain a close relationship to birds, and all of its features indicate it is a lizard.’

The two species’ skulls do not closely resemble one another at first sight.

But their shared characteristics became clearer as the researchers digitally isolated each bone and compared them with each other.

The differences were minimised when the original shape of both fossils was reconstructed through a painstaking process known as retro-deformation.

Dr Bolet said: ‘We concluded both specimens are similar enough to belong to the same genus, Oculudentavis, but a number of differences suggest that they represent separate species.’

The Cretaceous from 145.5 to 66 million years ago gave rise to many lizard and snake groups alive today.

But tracing fossils from this era to their closest living relatives can be difficult.

Dr Daza said: ‘We estimate many lizards originated during this time, but they still hadn’t evolved their modern appearance.

‘That’s why they can trick us. They may have characteristics of this group or that one, but in reality, they don’t match perfectly.’

The study in Current Biology could provide a model for how to ethically source Burmese amber amid the complexities of conflict in the region.

Dr Daza said: ‘As scientists we feel it is our job to unveil these priceless traces of life, so the whole world can know more about the past.

‘But we have to be extremely careful that during the process, we don’t benefit a group of people committing crimes against humanity.

‘In the end, the credit should go to the miners who risk their lives to recover these amazing amber fossils.’