Touchy subject: 3D-printed fingertip developed by British scientists can sense of touch and can ‘feel’ just like human skin

While machines might be able to beat the world’s best chess player, they lack the ability to pick up a chess piece even as well as a child.

This is partly because the artificial grippers on robots do not have the same feel as a human fingertip, which is used to guide a person’s hand as objects are handled.

But soon this may no longer be the case because scientists have created a 3D-printed fingertip that has a sense of touch like human skin.

They hope that it could eventually help improve prosthetics for humans by making artificial skin that is just as good as real skin. 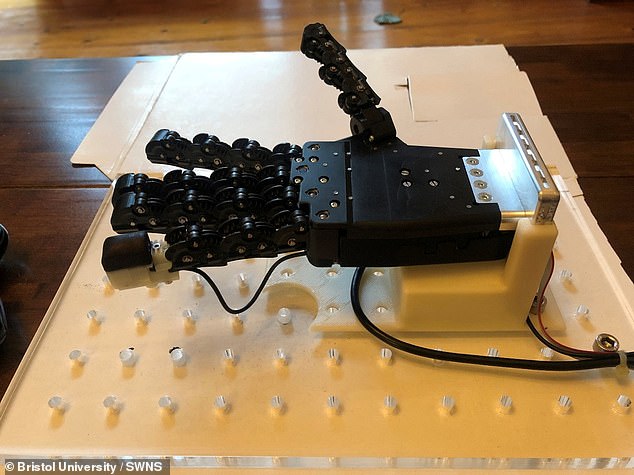 Tech: Scientists have created a 3D-printed fingertip that has a sense of touch like human skin

Researchers found that the new fingertip was able to produce artificial nerve signals that looked like those produced by signals from various human nerve endings.

Professor Nathan Lepora, from the University of Bristol’s department of engineering maths and based at the Bristol Robotics Laboratory, said: ‘Our work helps uncover how the complex internal structure of human skin creates our human sense of touch.

‘This is an exciting development in the field of soft robotics – being able to 3D-print tactile skin could create robots that are more dexterous or significantly improve the performance of prosthetic hands by giving them an in-built sense of touch.’

The researchers created the sense of touch in the artificial fingertip using a 3D-printed mesh of tiny pin-like bumps similar to those found on human tactile skin.

The bumps – papillae – are made on 3D-printers that can mix together soft and hard materials to create complicated structures like those found in biology. 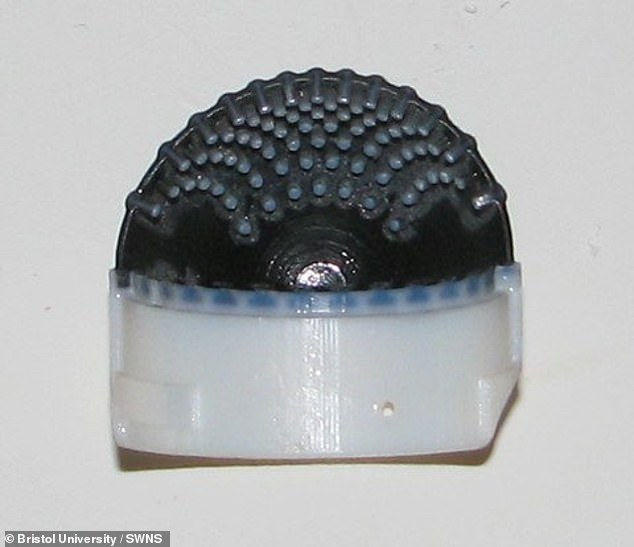 Researchers found that the new fingertip was able to produce artificial nerve signals that looked like those produced by signals from various human nerve endings. A cut-through section of the fingertip is pictured

‘Human tactile nerves transmit signals from various nerve endings called mechanoreceptors, which can signal the pressure and shape of a contact.’

He added: ‘In our work, we tested our 3D-printed artificial fingertip as it “felt” those same ridged shapes and discovered a startlingly close match to the neural data.’

While the research found a very close match between the artificial fingertip and human nerve signals, it was not as sensitive to fine detail.

Prof Lepora suspects this is because the 3D-printed skin is thicker than real skin and his team is now exploring how to 3D-print structures on the microscopic scale of human skin.

He said: ‘Our aim is to make artificial skin as good – or even better – than real skin.’

The findings are published in two papers in the Journal of the Royal Society Interface.

Cutting your hand, tearing a muscle, or even breaking a bone are all injuries that will heal over time.

Experts at Vrije Universiteit Brussels (VUB) have created a synthetic skin that aims to mimic nature’s self-repairing abilities, allowing robots to recover from ‘wounds’ sustained while undertaking their duties.

Further development of the technology could also allow Terminator-style killer robots, built for the battlefield, to repair the damage they sustain in combat.

Researchers have been with experimenting with soft robots for some time now.

They are constructed from flexible materials, inspired by the soft tissue from which humans and many other organisms are made.

Their flexibility allows them to be used for a wide variety of applications, from grabbing delicate and soft objects in the food industry to performing minimally invasive surgery.

They could also play an important role in creating lifelike prosthetics.

However, the soft materials also make them susceptible to damage from sharp objects or excessive pressure.

Damaged components must then be replaced to avoid the robot ending up on the scrap heap.

But VUB has come up with a new rubber polymer that can repair this type of damage.

Professor Bram Vanderborght of BruBotics VUB, who worked on the plastic, said: ‘The outcome of the research opens up promising perspectives.

‘Robots can not only be made lighter and safer, they will also be able to work longer independently without requiring constant repairs.’

To create their synthetic flesh, the scientists used jelly-like polymers that melt into each together when heated and then cooled.

When damaged, these materials first recover their original shape and then heal completely.

This principle was applied in three self-healing robotic components; a gripper, a robot hand, and an artificial muscle.

These resilient, pneumatic components were damaged under controlled conditions to test whether the scientific principle also works in practice