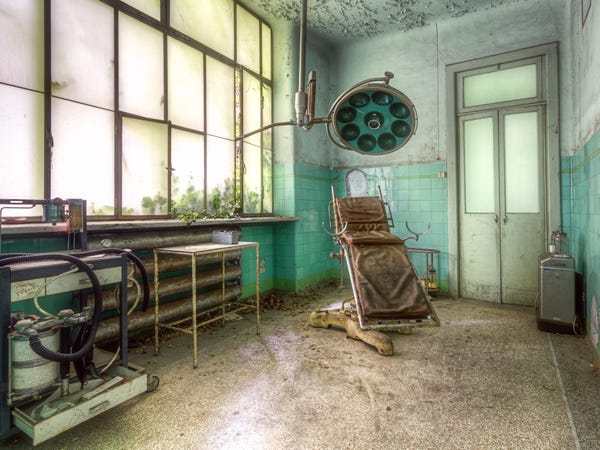 Some of the most bone-chilling abandoned places in the world are hospitals.

From run-down and decrepit psychiatric wards to barren morgues, photographs of abandoned hospitals offer an eerie look into the past.

Here are 25 haunting photos of abandoned hospitals that will give you the creeps.

Renwick Smallpox Hospital on Roosevelt Island in New York City was built in the 1850s. 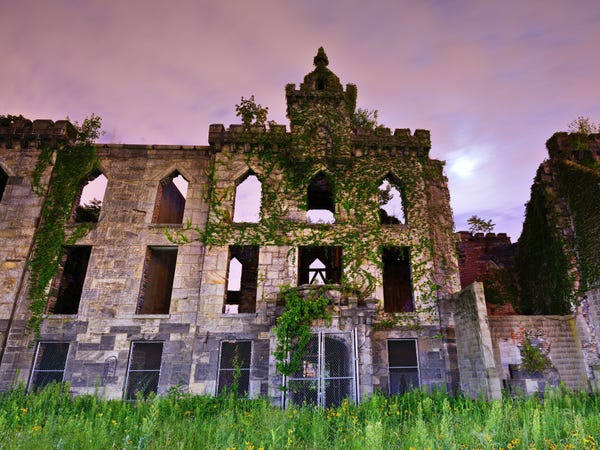 According to Atlas Obscura, the hospital operated between 1856 until 1875 as a primary treatment center for smallpox, a deadly disease that, prior to the invention of a vaccine in 1796, killed more than 400,000 people in Europe alone per year.

The hospital was later converted to a nurses' dormitory before being abandoned completely in the 1950s. The building fell into disrepair and is now a shell of the grand structure it once was — today, only the outer walls and the foundation remain. In 1975, the dilapidated hospital was declared a city landmark. 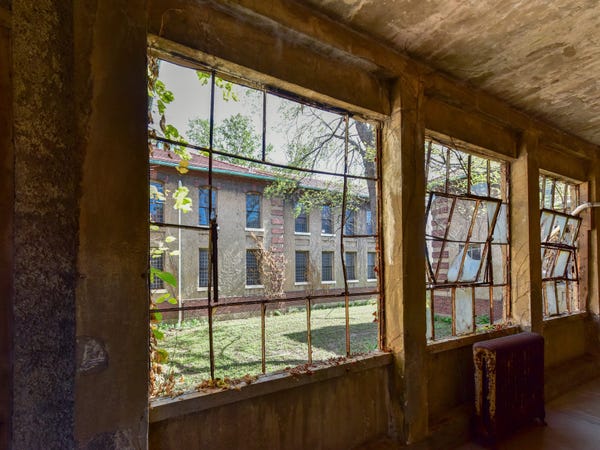 In the early 20th century, immigrants would pass through the island to be checked for any contagious diseases. If they were deemed healthy, they would be granted passage into the United States. However, they could also end up at one of the island's two hospitals — one a more general hospital and one set aside for contagious and infectious diseases.

The hospitals reportedly practiced some questionable medical tactics at the time. 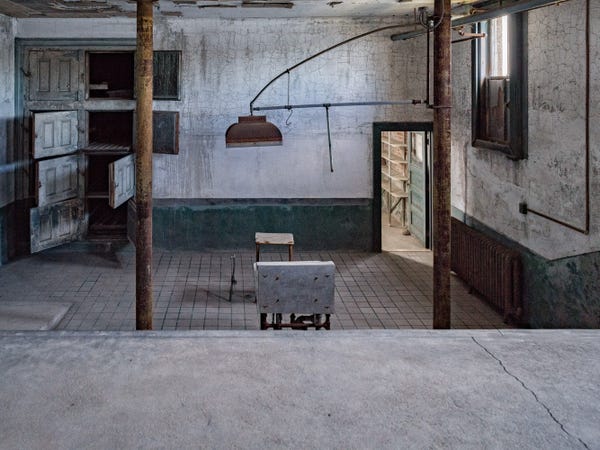 Some doctors poured chloric acid on patients' scalps to treat ringworm and pulled back eyelids with button hooks to check for trachoma, according to Business Insider. Throughout the years of the hospital's operation, 3,500 patients in total reportedly died.

In 1924, the complex was converted into a psychiatric hospital for soldiers.

Willard Asylum for the Chronic Insane in Ovid, New York, is one of the creepiest abandoned hospitals in the country. 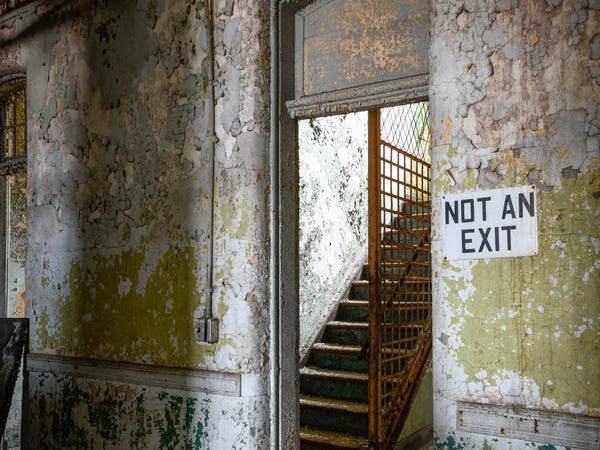 The state-run hospital was opened by New York's Surgeon General Dr. Sylvester D. Willard in 1869, according to Atlas Obscura. The hospital treated patients suffering from everything ranging from nerves to chronic or acute insanity and lunacy.

The campus was divided between men and women. "Violent" and "non-violent" patients were also separated. 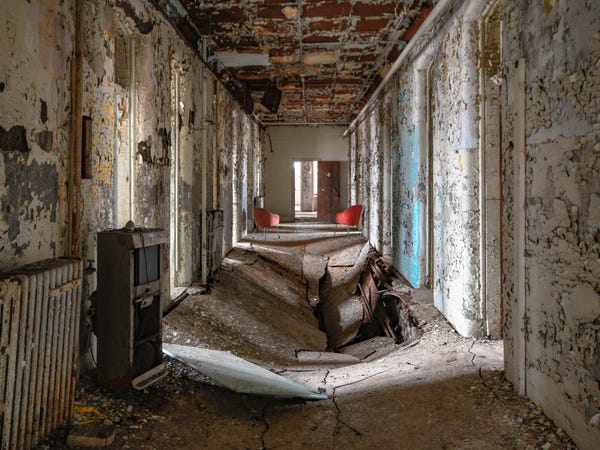 According to Atlas Obscura, patients had access to a range of facilities including a bowling alley, a movie theater, a gymnasium, and a farm with crops grown and tended to by the people who lived there.

However, the hospital still offered treatments for mental illness that were typical, unfortunately, of the time, including ice baths and the use of electro-shock therapy.

The hospital discharged its last patient in 1995 and subsequently closed its doors. 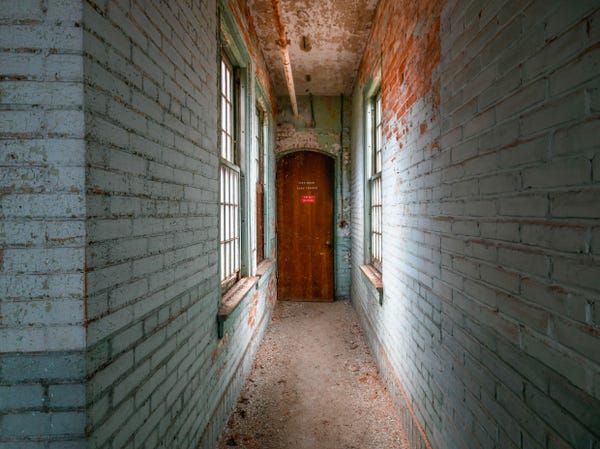 After the explosive 1972 exposé by Geraldo Rivera of Willowbrook Asylum in Staten Island, New York, hospitalization in other mental institutions had begun to drastically decline. Today, Willard Asylum is abandoned.

In the past, tours allowed visitors to photograph and explore Willard Asylum's abandoned buildings. However, tours have since been discontinued.

Geraldo Rivera's documentary on the horrific conditions of "mental institutions" in America also shone a light on Letchworth Village in Thiells, New York. 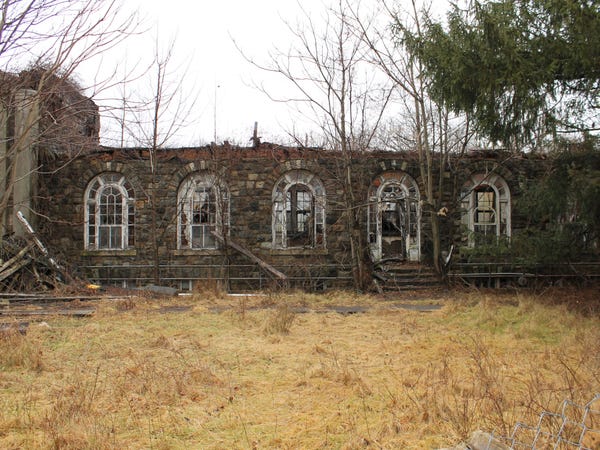 The first patients were admitted to Letchworth Village on July 10, 1911, according to Hudson Valley Magazine. The hospital was designed to care for around 3,000 patients and was one of the biggest employers in the local area — at the hospital's peak capacity, it employed about 10,000 people.

It tested out the first polio vaccines on young patients there during the 1950s. Despite the highly controversial practice, the vaccine was deemed successful.

However, the institution soon surpassed its maximum 3,000-people capacity and became overcrowded and underfunded. 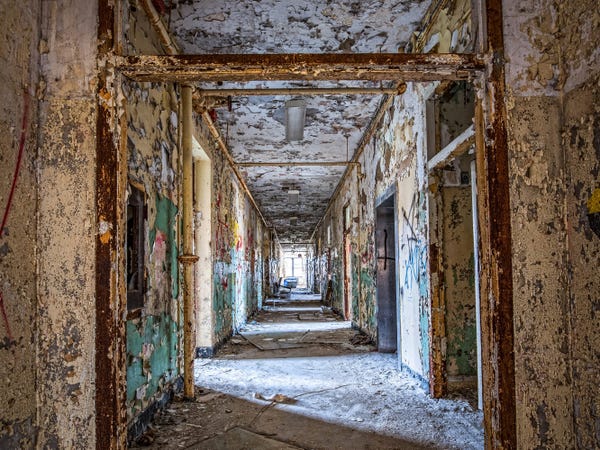 The institution was accused of abuse and fostering bad conditions for its patients. Following the state's move towards "institutionalization," the number of Letchworth patients dwindled. The hospital closed its doors in 1996.

This hospital in the abandoned city of Pripyat, Ukraine, was left behind after the Chernobyl disaster. 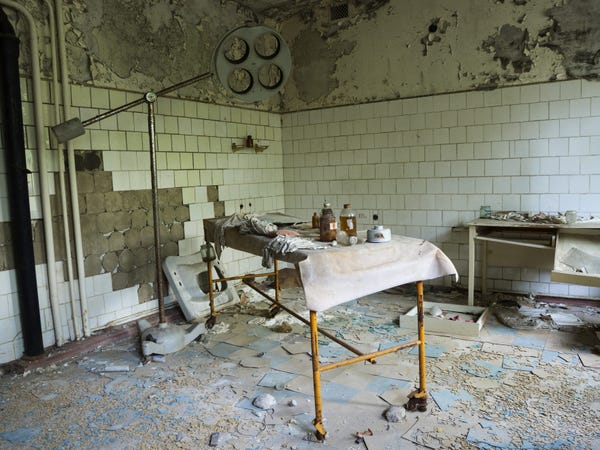 In the immediate aftermath of the nuclear disaster, patients were treated for radiation at the facility, known as Pripyat City Hospital No. 126. However, the hospital and the city soon emptied out as the environment was considered too dangerous and radioactive.

The hospital is still littered with relics from before the 1986 explosion. 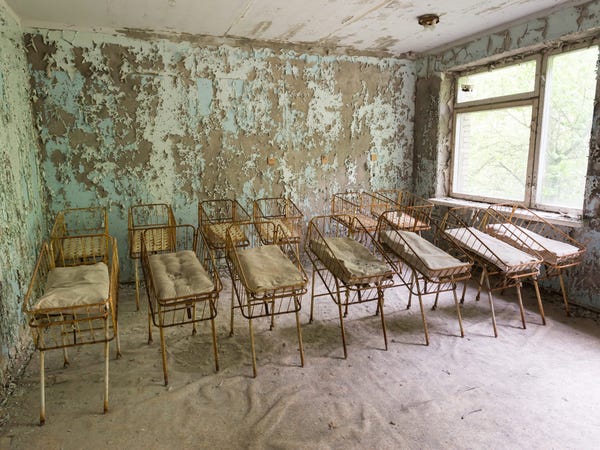 From rusted, abandoned cots to old chairs and broken beds, the hospital is arguably one of the spookiest abandoned places in the world.

Beelitz-Heilstätten is an abandoned military hospital in Germany that once treated Adolf Hitler. 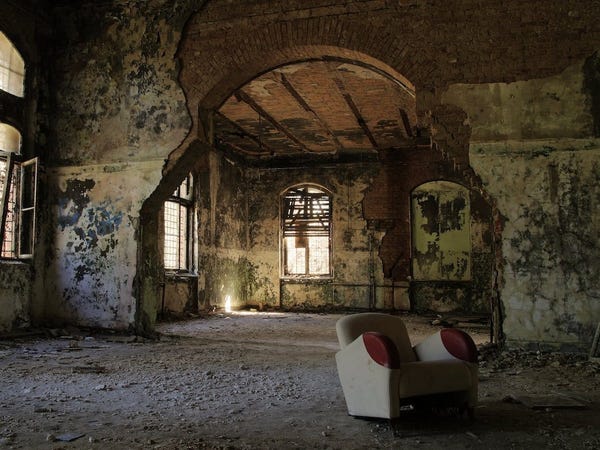 According to a previous article by Insider, the Nazi leader was treated for a thigh injury he acquired during a WWI battle in late 1916. The hospital was later abandoned during the fall of East Germany, but was used as a filming location for the movie "The Pianist."

This hospital in Italy has been abandoned for years. 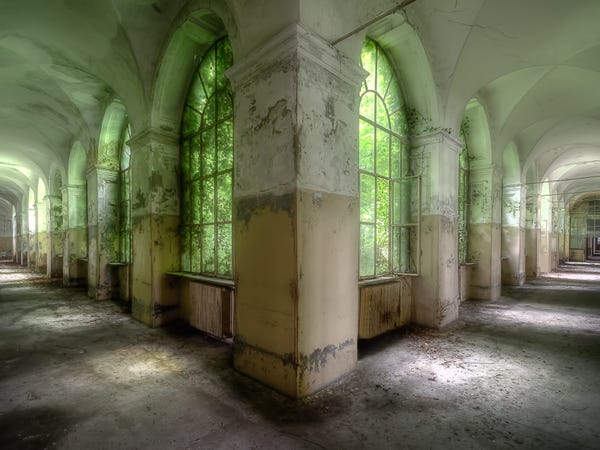 The hospital was built during the end of the 19th century, according to urban explorer and photographer Roman Robroek, as a facility for people with mental illness.

The hospital closed about a century later and is still in excellent condition considering its age. 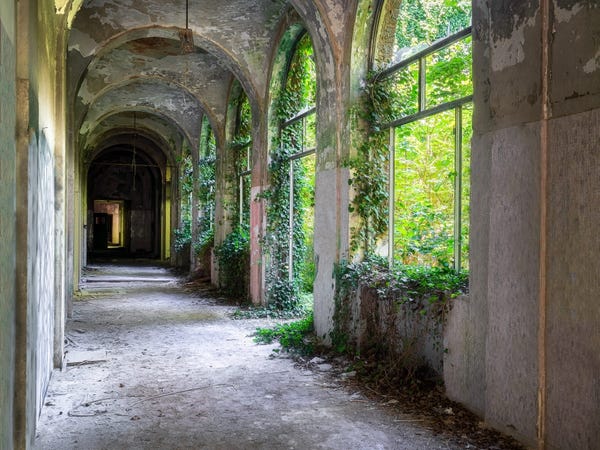 However, nature has begun to overtake the decrepit institution.

The hospital is littered with relics from when it was in operation. 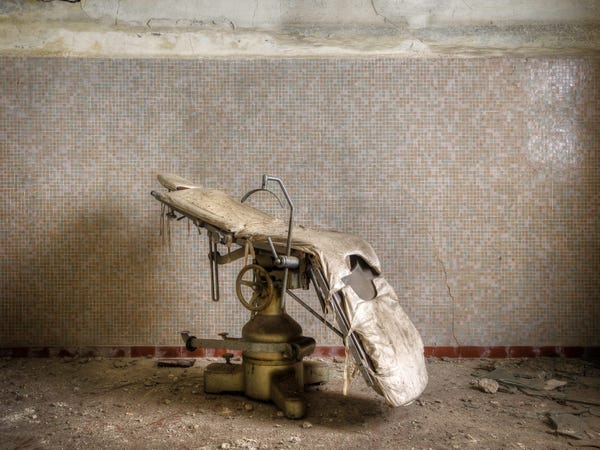 This old, decaying operating chair was found inside the spooky hospital.

The walls and floors are starting to decay at a rapid pace. 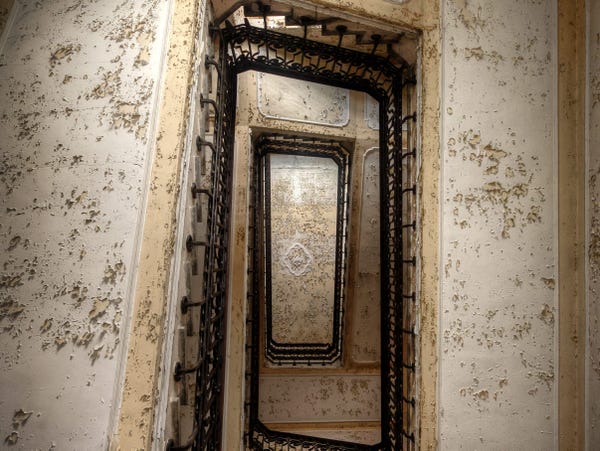 However, much of the original structure is still somewhat intact.

The hospital, though abandoned, is still somewhat grand in its appearance. 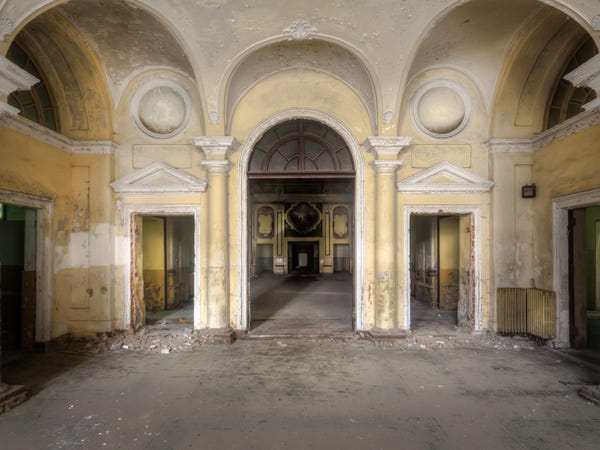 High ceilings, ornate archways, and pillars are reminiscent of another time in history.

The hospital appeared to have religious ties at one point. 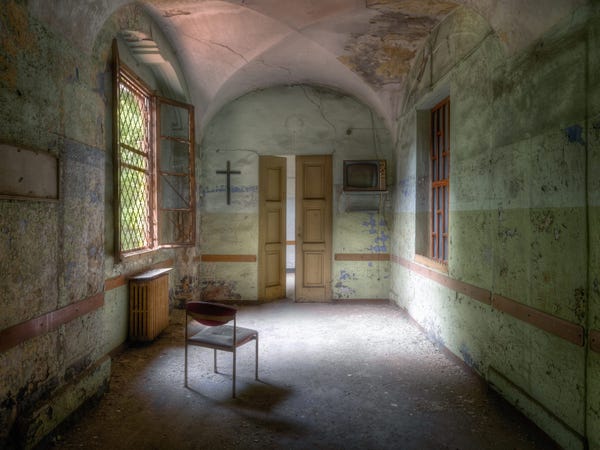 A cross is seen on the wall.

Abandoned beds and other pieces of furniture remain inside the Italian hospital. 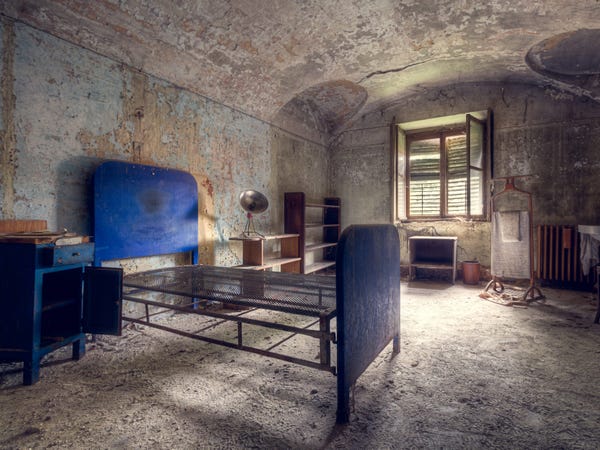 Mattresses have been stripped from the beds, and drawers and shelves now lie completely empty.

The scene looks like something out of a horror movie. 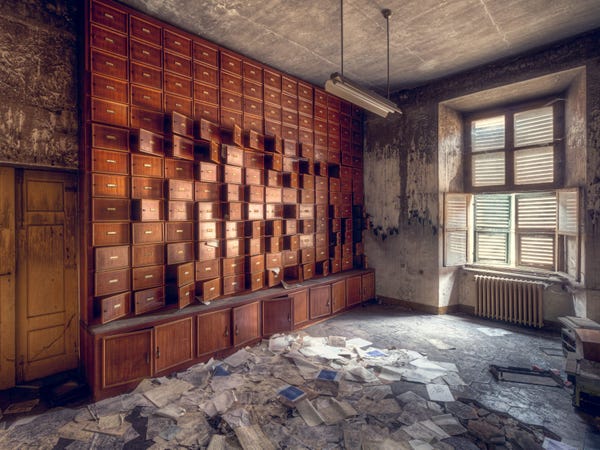 Abandoned rooms like this make you wonder who was treated in the hospital — and for what — at that point in time.

One of the creepiest rooms one can come across in an abandoned hospital is a morgue. 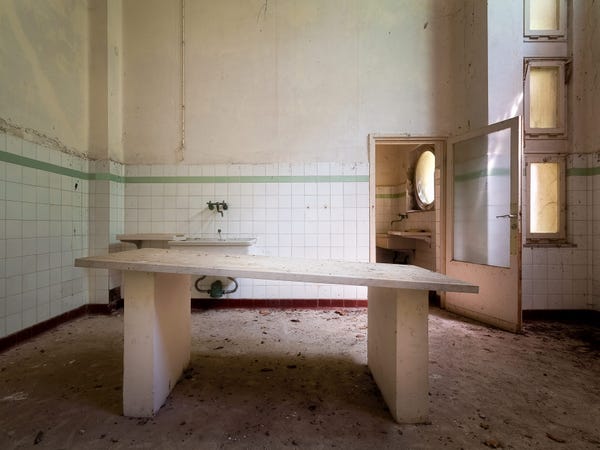 This morgue inside an abandoned hospital in Italy is beginning to crumble, though a viewing table and tiled walls remain.

Robroek explains that the abandoned hospital was extremely hard to get to, but well worth the trip. 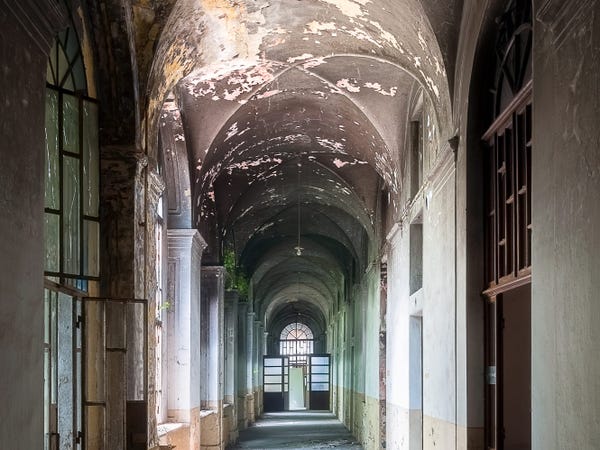 "The building has been sealed pretty well and entering was only possible by going through a very dark tunnel system in the cellar of the building," the photographer and urban explorer wrote in a blog post about the experience. "We had to use our flashlights to see and we were not able to stand straight up. We also had to crawl over various objects to finally reach our destination; a staircase leading upwards. You could easily get lost down there and it was quite scary here and there."

"This place was on top of my 'wish-to-see' list for a very long time. It's my favorite abandoned place that I've been to, yet," he continued.

This abandoned hospital in Germany still has a net set up for an indoor tennis match. 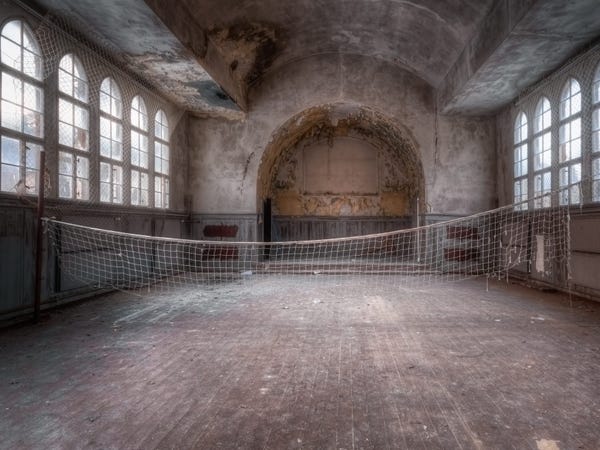 Cobwebs now line the walls and the floor is caked in dust.

The remnants of old operating equipment can be seen inside this abandoned hospital in Poland. 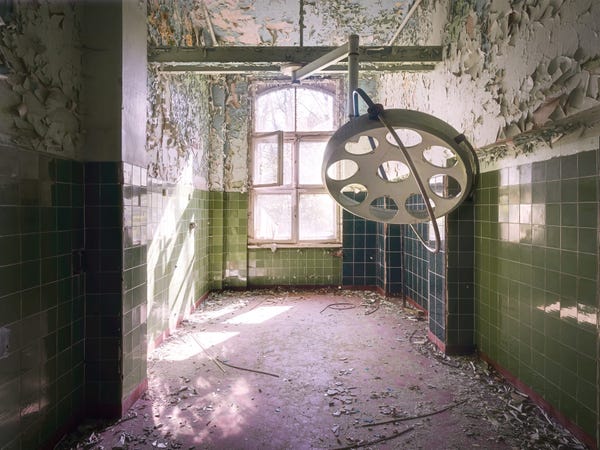 Roman Robroek has visited abandoned locations all around the world but is always careful not to reveal too much about the history and precise location of each place in order to prevent vandals or graffiti artists from going there and potentially causing damage.

Each abandoned hospital has its own history, some more morose than others. 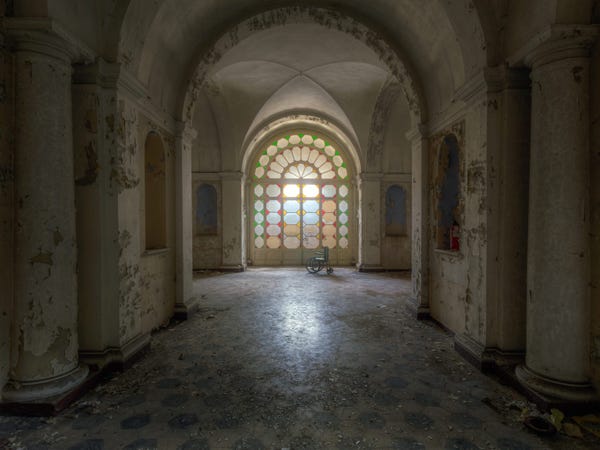 When looking at photographs of abandoned, crumbling hospitals, it's natural to wonder and pay respect to the patients who were once treated there.

Some, like the patients of abandoned psychiatric hospitals across the world, were mistreated and, just like the buildings themselves, abandoned by society. Other hospital patients were admitted for common or rare ailments but sadly passed away.

As these abandoned hospitals continue to crumble, so does the chance of reviving them.