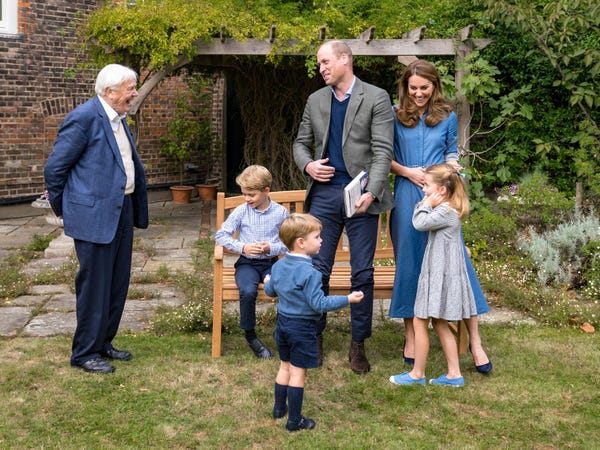 Prince Louis of the British royal family was recently spotted wearing one of Prince George's old sweaters — and, turns out, this isn't the first time the royals have dressed their kids in hand-me-downs.

Throughout the decades, royal children have been known to wear their brother's or sister's clothes, as well as items from their royal parents and other family members.

Kate Middleton and Meghan Markle have also been spotted wearing heirloom items like jewelry and tiaras, passed down from Queen Elizabeth and Princess Diana. 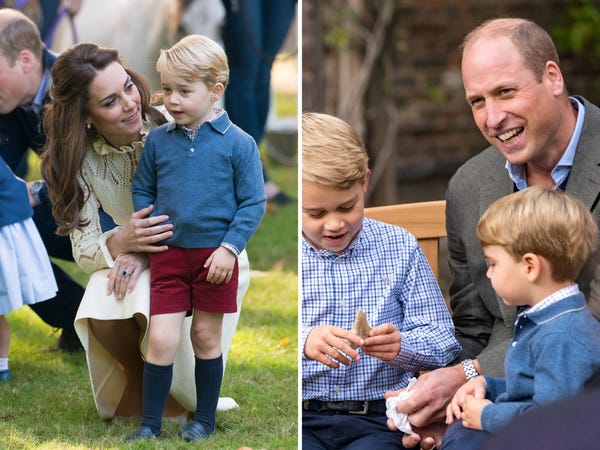 According to People, the merino wool jumper is from children's brand Wild & Gorgeous and is the same collared sweater that Prince George wore during the Royal Tour of Canada in 2016.

From the very beginning, Prince George, Princess Charlotte, and Prince Louis had their matchy-matchy style down pat. 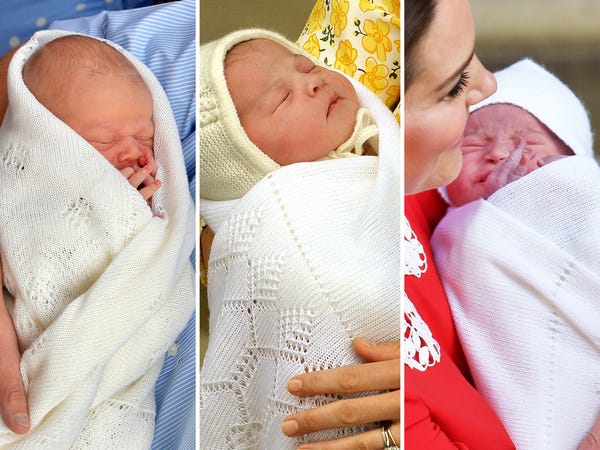 During the royal babies' "first looks," they all were wrapped in the same cream knit blanket by G.H. Hurt & Sons. The blanket holds a great deal of significance in the royal family and has been passed down through the generations.

According to Cosmopolitan, the world caught a glimpse of the iconic wrap back in 1948 when Queen Elizabeth II and Prince Philip presented Prince Charles to the world in an official royal portrait. Princess Diana and Prince Charles were also photographed leaving the hospital after the births of both Prince William and Prince Harry in the same blanket.

Ever since, the Cambridge kids have been known to wear each other's clothes. 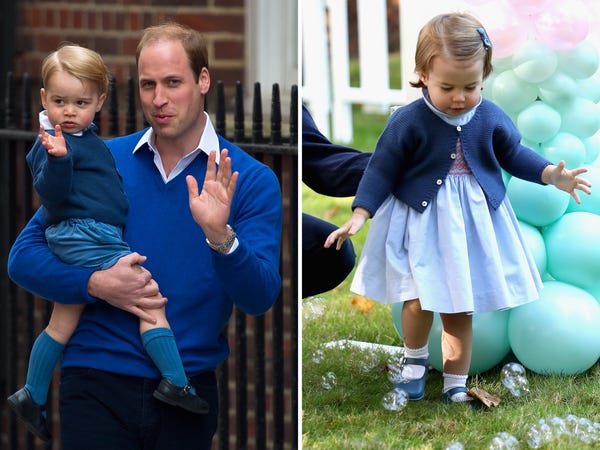 Prince George first wore the blue cardigan, which is by the brand Amaia, to greet his new baby sister at the hospital in 2015. The next year, Princess Charlotte wore the sweater to a children's party for military families while on tour in Canada. 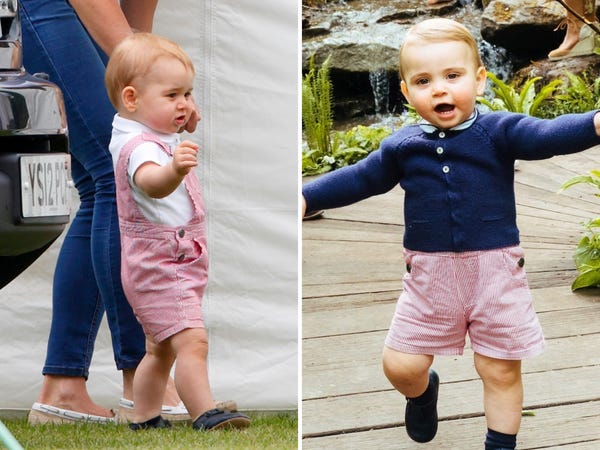 For the 2019 photo, taken at the Back to Nature garden by Kate Middleton herself, Prince Louis wore the romper from Spanish childrenswear store Neck & Neck with a blue button-up sweater.

The exact dungarees, which cost around $35 at the time, are no longer available. Neither is Prince Louis' affordable sweater from H&M, which cost just $7 but quickly sold out. 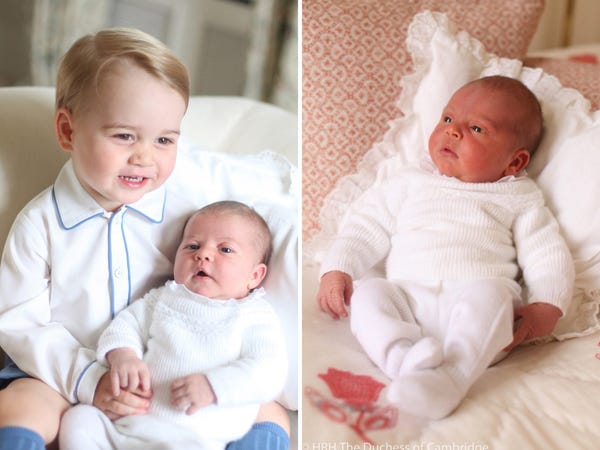 Both royal babies were photographed in the same white onesie in 2015 and 2018, respectively.

Prince Louis has worn Prince Harry's hand-me-downs in the past. 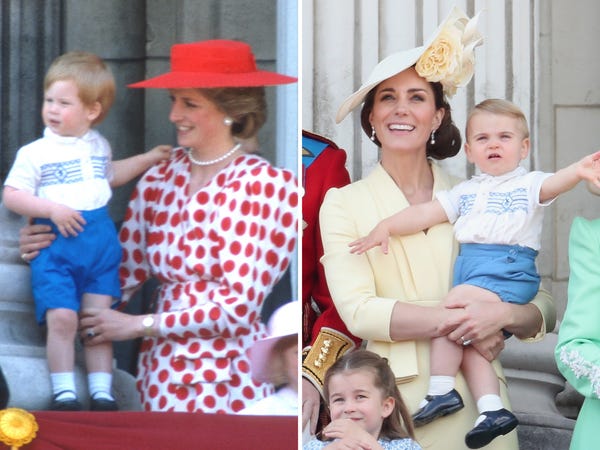 In 1986, Princess Diana was photographed holding Prince Harry at the Trooping the Colour parade. More than 30 years later, in 2019, Prince Louis was spotted wearing the same outfit to attend the annual parade.

Princess Charlotte has also been spotted wearing a pair of red Mary Jane shoes worn by Prince Harry in 1986. 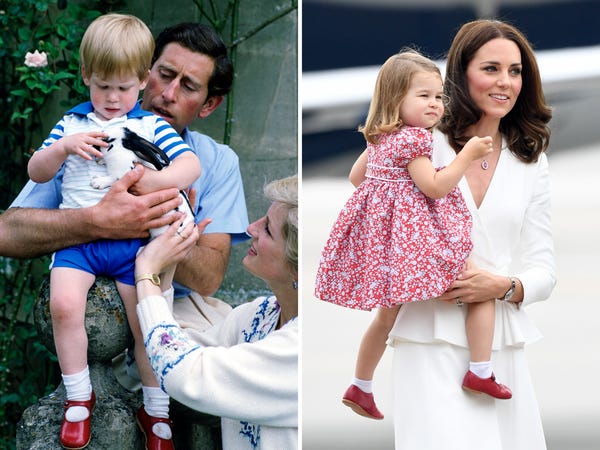 Prince Harry was first photographed wearing the red shoes while spending time at Highgrove House with his parents, Prince Charles and Princess Diana. In 2017, Princess Charlotte wore the same pair while touching down in Poland for a royal tour.

Prince George looked almost identical to his father when he wore the same powder blue outfit from 1984. 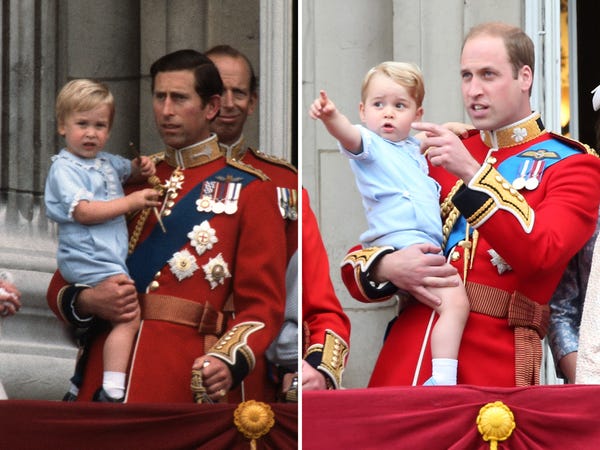 The royals likely wanted to choose something sentimental for Prince George to wear during his first public appearance on the balcony of Buckingham Palace.

Prince George also wore his father's blue-and-white outfit from 1984 to the Trooping the Colour ceremony in 2016. 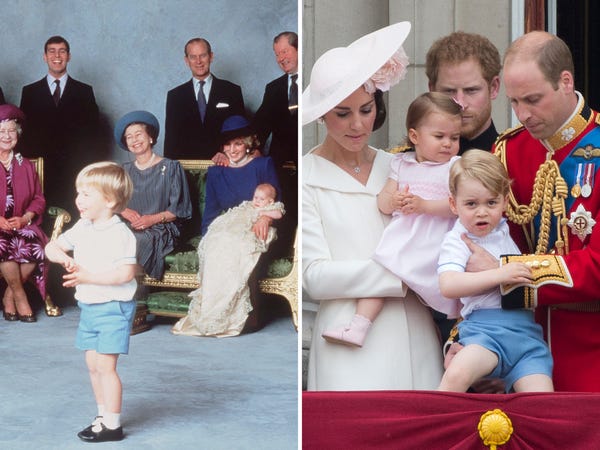 Only the most eagle-eyes of royals fans would spot this instance of outfit repeating.

Though Prince George's outfit may not technically be a hand-me-down, this recreation of Prince William's adorable look from 1984 is spot-on. 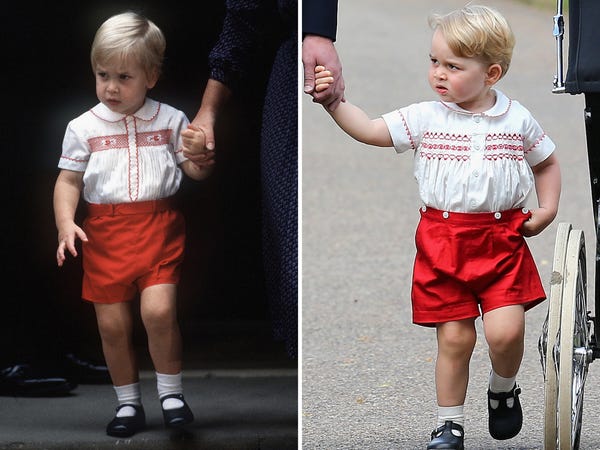 Prince William wore the look to meet Prince Harry at St. Mary's Hospital in 1984, while Prince George was photographed wearing a replica of the outfit to Prince Charlotte's christening.

The almost-identical shirts feature similar red stitching on the front and red piping on the collar. However, while Prince William's shorts were simpler, Prince George's had cute white buttons around the waistband.

It's not only the British royals who rock hand-me-downs — Princess Estelle wore her mother, Crown Princess Victoria's, dress from 1980. 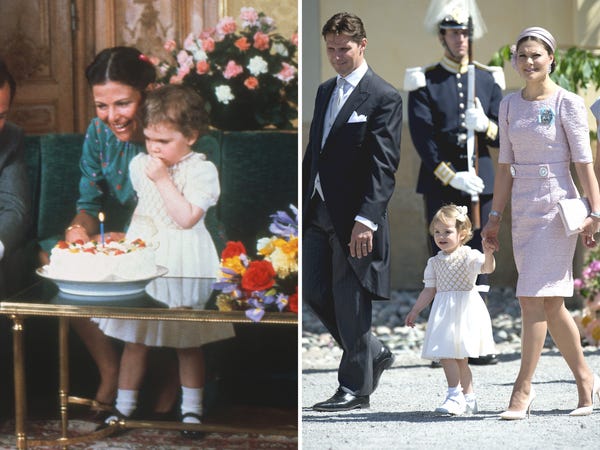 Princess Victoria of Sweden wore the gold-and-white dress to celebrate the King's 34th birthday, while Princess Estelle was spotted leaving the Royal Chapel, wearing the dress, after Princess Leonore's christening in June 2014.

Kate Middleton has been known to wear heirloom pieces from other royals' jewelry collections. 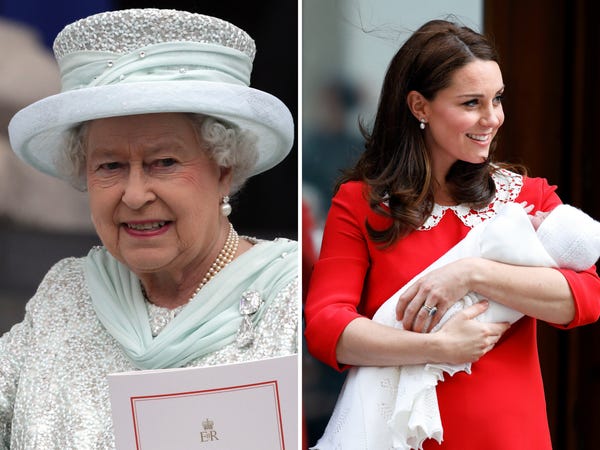 In 2018, the Duchess of Cambridge wore a pair of drop pearl earrings to depart the Lindo Wing with newborn Prince Louis. The same earrings were worn by the Queen six years earlier to celebrate the Diamond Jubilee. 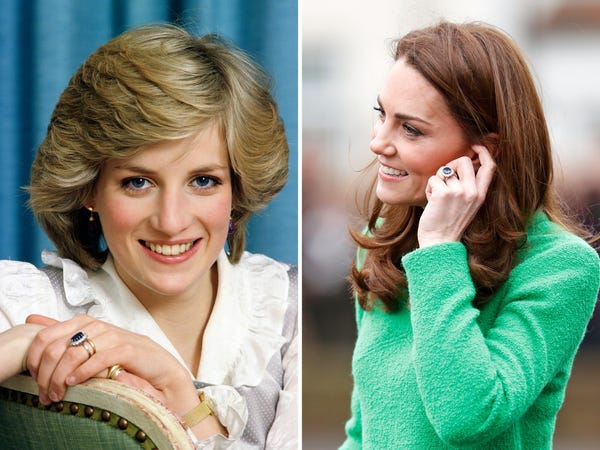 Princess Diana chose the ring herself from a Garrard's catalog, meaning that anyone in the world technically could have bought the same ring. It features a 12-carat sapphire surrounded by 14 diamonds.

Prince William proposed to Middleton with the family heirloom in 2010. The royal has continued to wear it ever since. 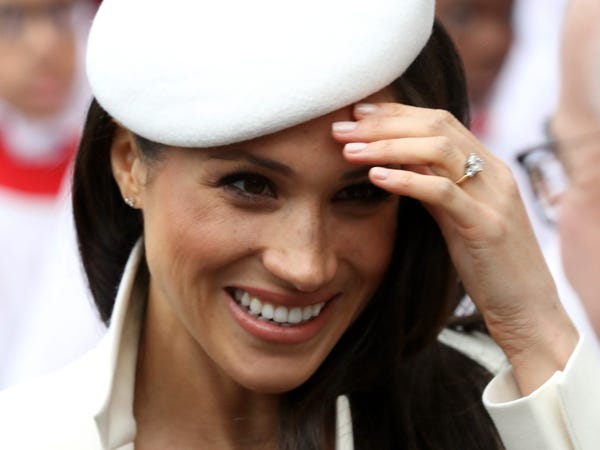 The center diamond is from Botswana, where the couple went on safari together, and the other two are from Princess Diana's jewelry collection, according to Town & Country. 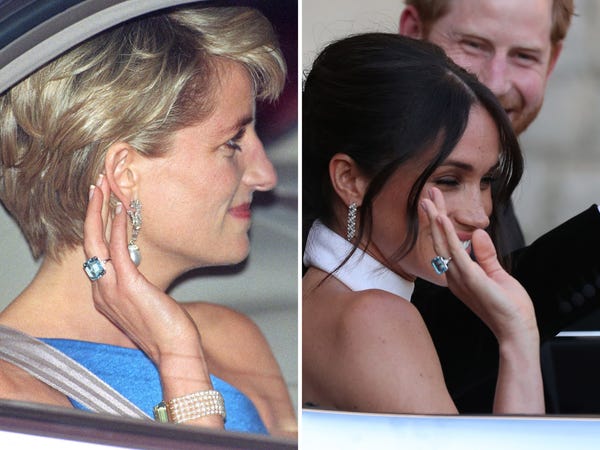 It was known as one of Princess Diana's favorite jewelry pieces, and she wore it often in the years before her passing. 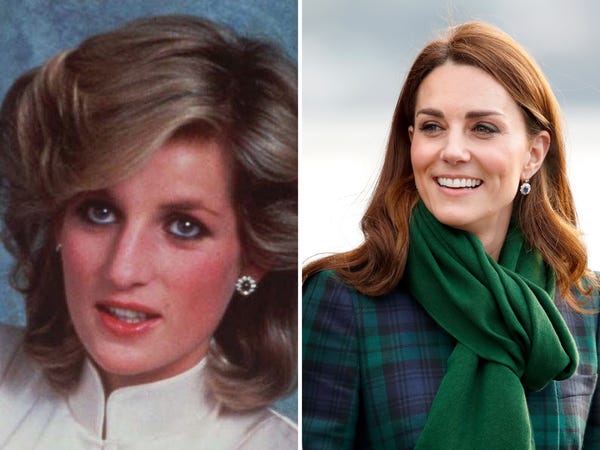 The sapphires found in the earrings are believed to have originally come from the strap of one of Princess Diana's watches. According to the Daily Mail, the watch was given to Princess Diana as a wedding present by the Crown Prince of Saudi Arabia and later turned into a pair of stud earrings and then drop-style earrings.

Other jewelry pieces don't need any changes — Kate Middleton wore this pair of pearl earrings from Princess Diana's collection to the 2019 BAFTAs. 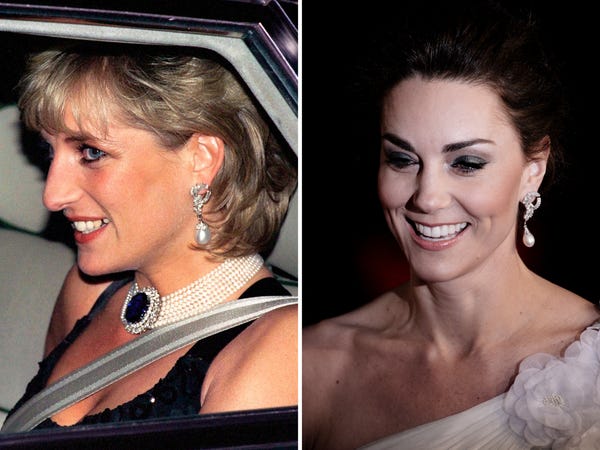 Princess Diana is pictured wearing the earrings to a gala at Bridgewater House in 1995. 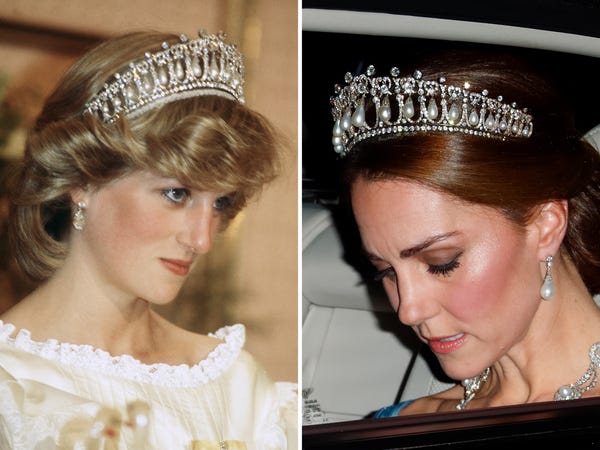 According to a previous article by Insider, the crown was given as a wedding present to Princess Diana from Queen Elizabeth. The ornate crown features 19 arches and contains 38 drop-shaped pearls suspended from "pretzel-like twists" referred to as lover's knot bows.

The Duchess of Cambridge has also been photographed wearing one of Princess Diana's bracelets. 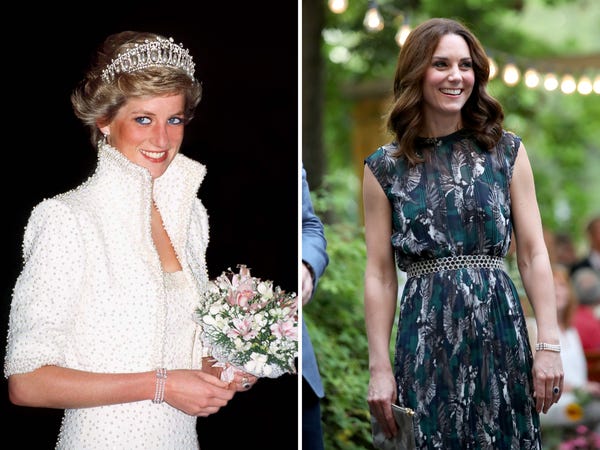 Kate Middleton wore the pearl bracelet on tour in Germany in 2017. It's the same one Princess Diana wore with her iconic "Elvis" outfit in 1989. 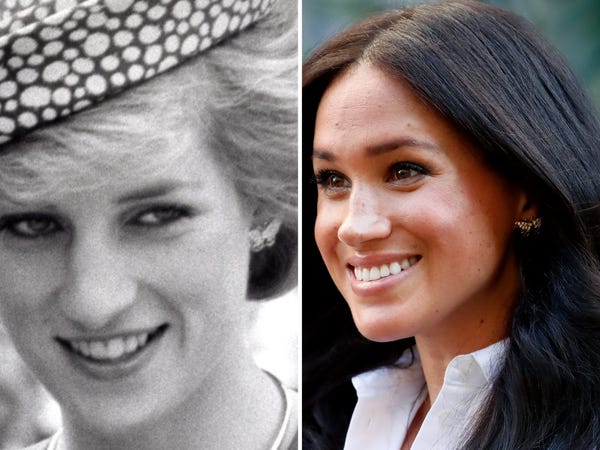 The earrings, worn by Meghan Markle to her charity clothing line launch in 2018, were last seen on Princess Diana in 1986.