Almanac of the Dead by Leslie Marmon Silko 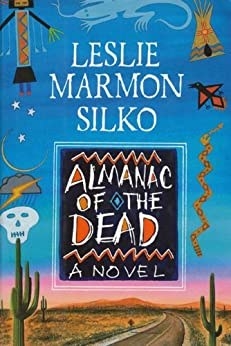 With more than two dozen characters, this sprawling contemporary epic recenters Mexican and U.S. border relations on the Indigenous experience. It’s a violent and disturbing read; you won’t find any likable, pleasant characters here. The novel’s title refers to a prophetic notebook, handed down to two of the characters, that predicts a time when the Native Americans of the Southwest and Mexico will reclaim their ancestral lands. But until then, the Indigenous characters grapple with 500 years of white European corruption. The fragmentary narrative is told in a style similar to ancient Mayan almanacs and mixes the past, present, and future in a cyclical pattern.

The Goldfinch by Donna Tartt 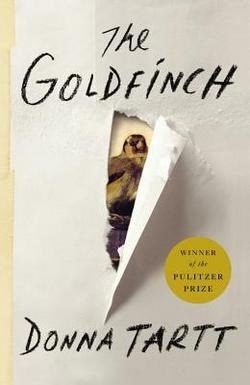 At thirteen, Theo survives a terrorist attack that kills his mother and leaves an art museum in ruins. In the rubble, he steals a painting of a goldfinch, and that painting follows him for the rest of his life, from Las Vegas to antique stores to Amsterdam and the underground art world. Filled with interesting characters, this is a densely woven and compelling read that will go by a lot faster than you’d expect.

The magicians in this alternate history of Regency-era England practice theoretical magic, not real magic. They study it, but the days of real magic are far in the past, as are the folktales of the Raven King. That is until the reclusive Mr. Norrell raises a woman from the dead with the help of his massive magical library, and Jonathan Strange — a reckless gentleman -becomes his apprentice. This is a humorous and fascinating character study between the two men, though, with a meandering plot and pseudo-scholarly footnotes, it isn’t for everyone.

Ida: A Sword Among Lions by Paula J. Giddings 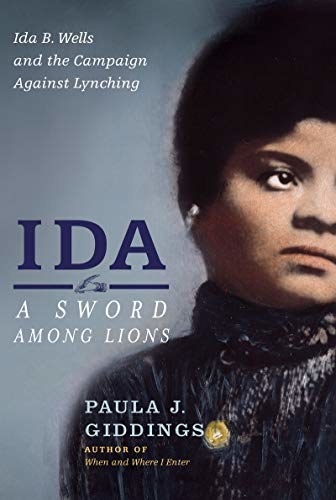 The activist Ida B. Wells led the first campaign against lynching, fought for women’s rights as a suffragette, and, as a journalist, attacked human rights violations. This biography chronicles both her life and the history of racism and sexism in the United States. It’s a riveting biography. 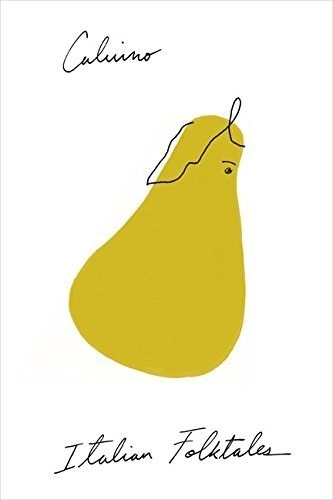 Calvino spent almost a decade collecting these weird and wonderful folktales from older work by folklorists. Many readers will recognize familiar motifs from well-known fairy tales — like “Little Red Riding Hood” and “Snow White”, but Calvino includes many others that will be unfamiliar to most readers, though still captivating.

House of Earth and Blood by Sarah J. Maas 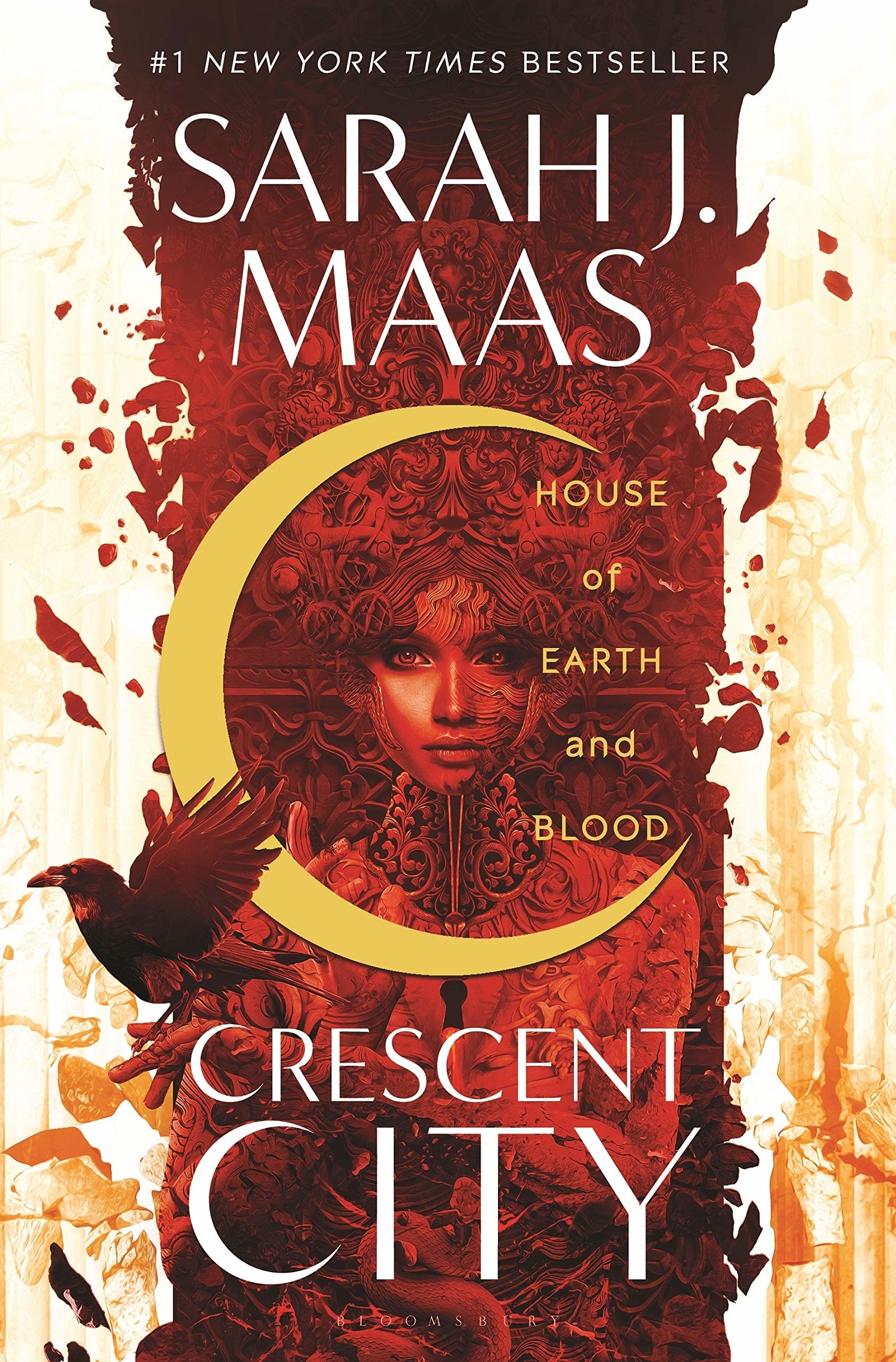 One of my spring fantasy recommendations, House of Earth and Blood is Sarah J. Maas’s first adult novel, though not her longest (that honor goes to Kingdom of Ash, book 7 in her Throne of Glass series, and 984 pages long). This is an action-packed contemporary fantasy romp with a dark edge. Though long, it’s a speedy read.

The Found and the Lost by Ursula K. Le Guin 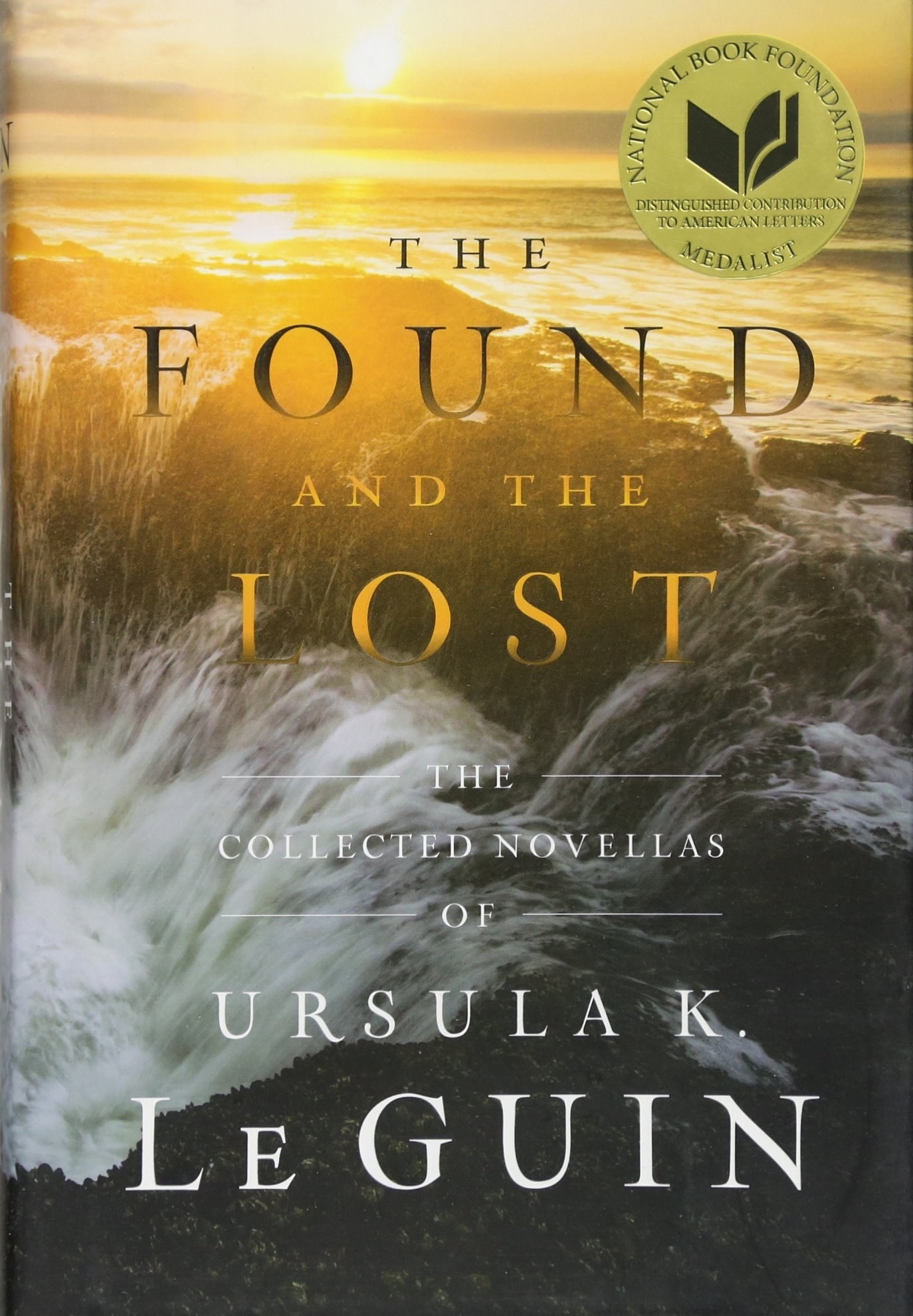 Le Guin was a multiple award-winning author of science fiction, fantasy, essay, and poetry, best known for her Earthsea fantasy series. The Found and the Lost collects all thirteen of her novellas into a single volume. Sophisticated and philosophical, these novellas deeply examine human nature, culture, and language. This is a must-read for fans of Le Guin’s work and new readers alike.

A Little Life by Hanya Yanagihara 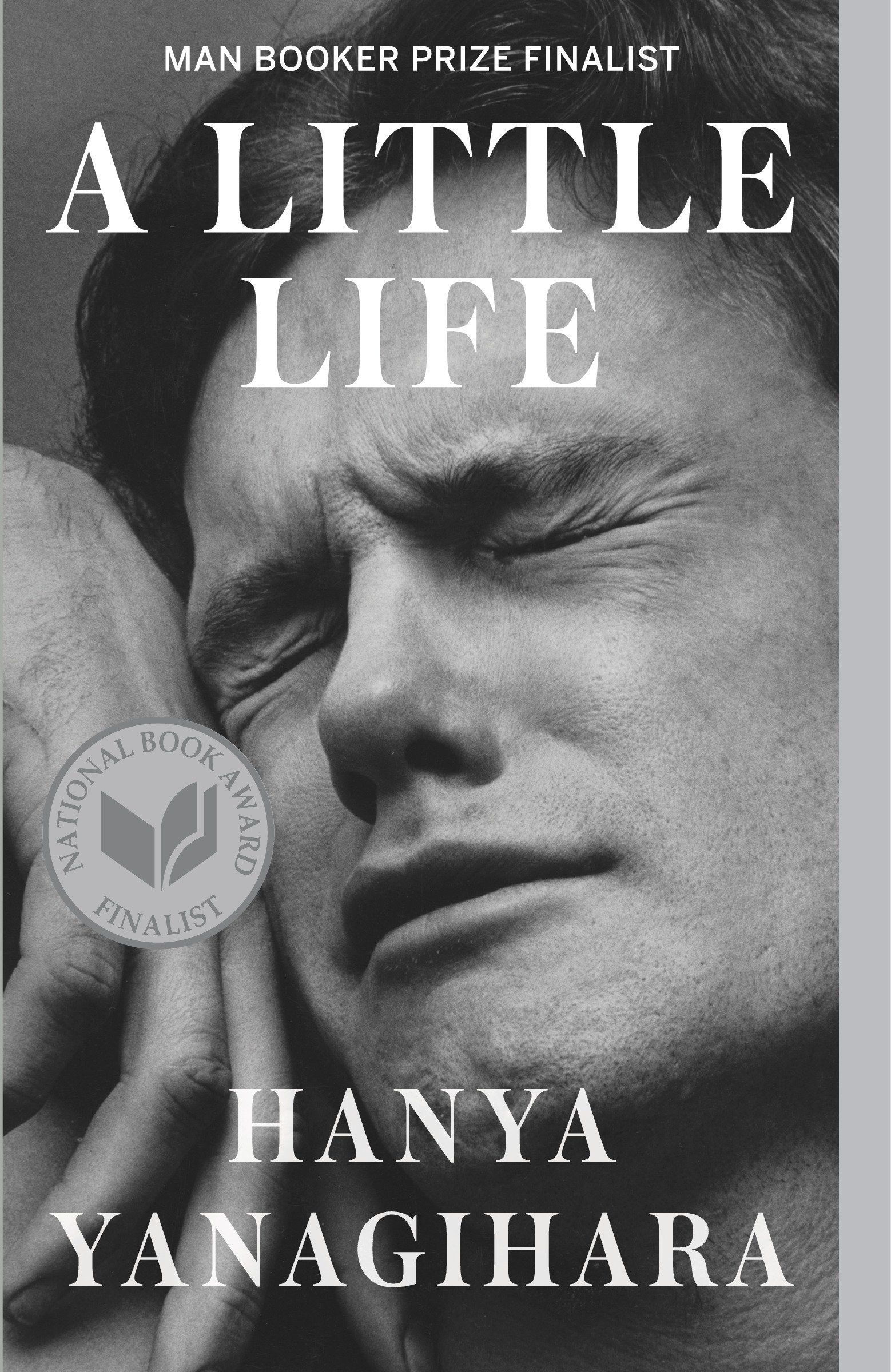 This book spans thirty years and follows Jude, a victim of traumatic child abuse who never truly recovers, and the family he creates in the friendship of three men. It’s a book about love, trauma, and mental illness that will devastate you again and again and again. 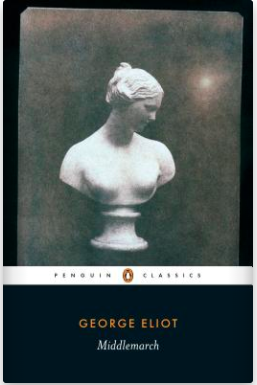 While all of George Eliot’s novels are excellent, Middlemarch, written in 1871, is her masterpiece. In Middlemarch, Eliot rotates between a cast of characters in a small town. Dorothea Brooke is of the upper class with superior intellect and grace. Everyone is disappointed when she marries Mr. Casaubon, a man far older than she, in the hopes that he would help her intellect grow. Mr. Lydgate, a new doctor in town, marries Rosamond, a charming and beautiful daughter of a manufacturer. But scandal and unfulfilled hopes mar their marriage. Mary Garth, the daughter of a poor but honest family, is courted by Fred, Rosamond’s brother, but with no prospects, he has little hope of attaining her. Eliot is a keen observer of psychology and often spends several chapters probing character motivations. 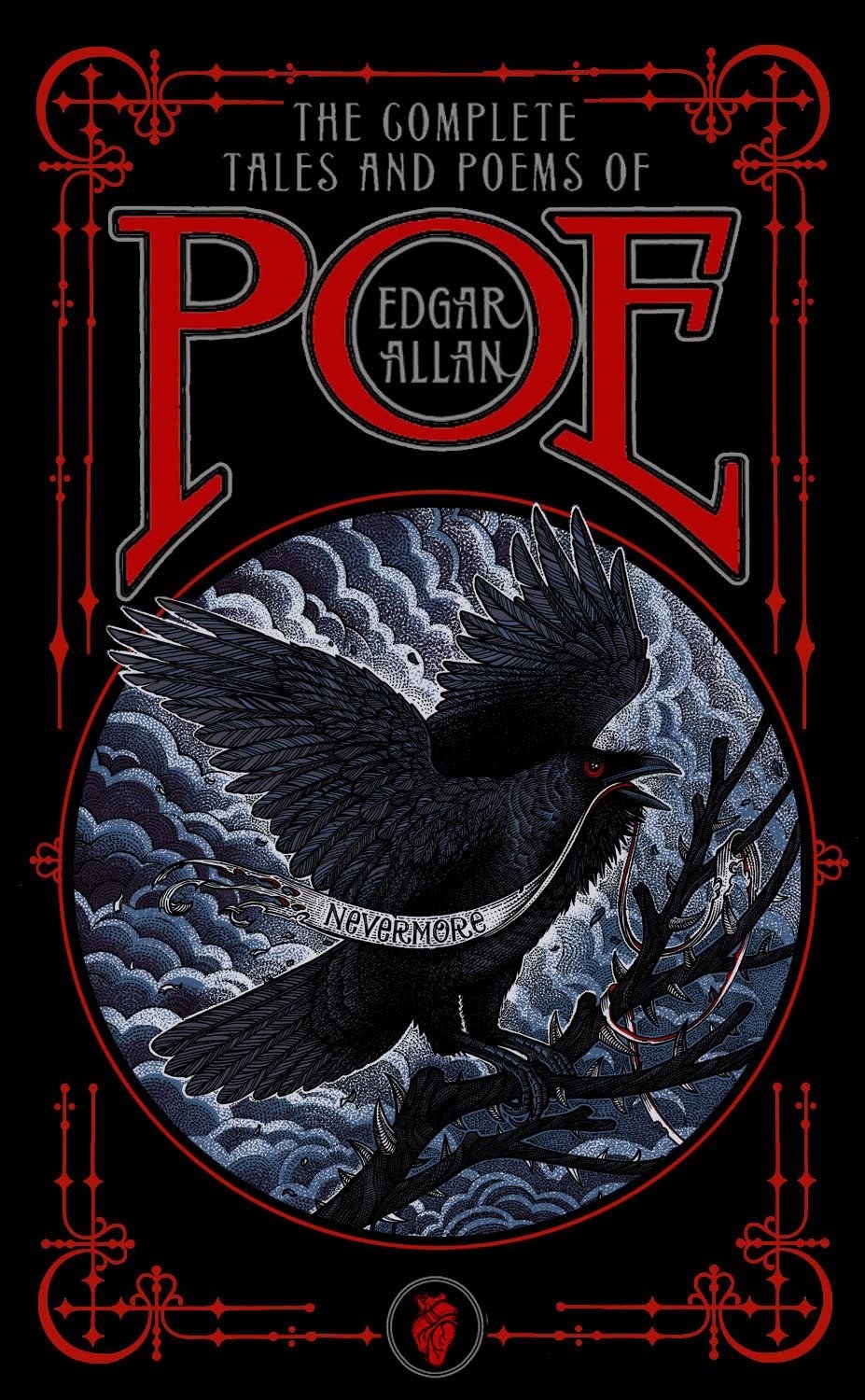 This collection compiles more than 125 of Poe’s short stories and poems. Revisit classics like “The Fall of the House of Usher,” “The Masque of the Red Death,” and “The Tell-Tale Heart” as well as lesser-known stories and poems like “The Pit and the Pendulum,” “Ulalume,” and The Narrative of Arthur Gordon Pym of Nantucket, Poe’s only completed novel. 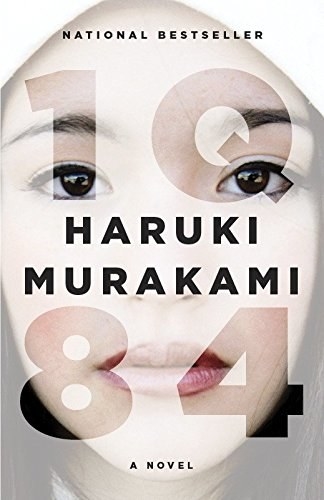 In 1984, Aomame — a sports instructor who also murders abusive men — and Tengo,a math teacher and writer, mysteriously find themselves in an alternate reality from a teen’s novel, Air Chrysalis, that Tengo was hired to ghostwrite. It’s no longer 1984, but 1Q84, and there are two moons in the sky. This is a dreamy, dystopian novel about love, originally published in three volumes in Japan, but published as a single volume in the United States. It can be a good jumping-off point if you’ve never read Murakami.

The Dreamblood Duology by N.K. Jemisin 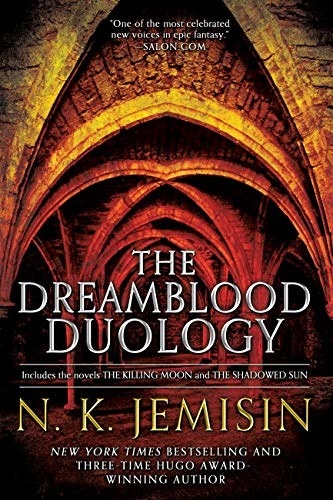 I’m cheating a little with this one because it combines a two-book series into one volume. The series is a dark epic fantasy about a mad king and priests who gather souls while the dying sleep. In book one, The Killing Moon, Gatherer Ehiru considers his work as a priest a sacred duty. He discovers someone else is gathering souls seemingly for pleasure, and Ehiru’s the only one who can stop them. Book two, The Shadowed Sun, is about a displaced prince, a plague, and a woman breaking boundaries by becoming the first dream-sharer. Trigger warnings for rape.

The Brothers Karamazov by Fyodor Dostoyevsky, Translated by David McDuff 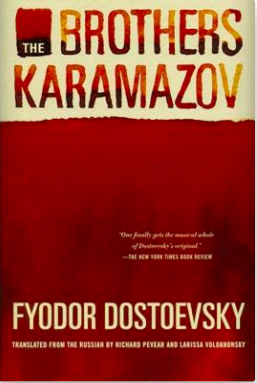 While not the longest on this list, The Brothers Karamazov is the densest. The three sons of Fyodor Pavlovich Karamazov could not be more different. Dmitri is charismatic and impulsive, in love with the same woman as his father; Ivan is coldly intellectual; Alyosha, the primary narrator, is naive and religious. After Fydor is murdered, Dmitri is arrested and put on trial. This book entwines philosophical and religious treatises with courtroom drama and a tortured love triangle. 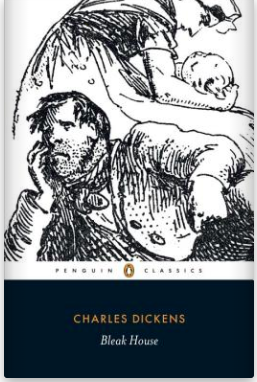 This is the longest novel by Dickens in terms of page length, and my favorite of his. It’s a murder mystery, courtroom drama, and romance that perfectly encapsulates Victorian-era London and Dickens’s witty and compassionate writing style. He introduces many subplots and characters in the beginning, and then slowly ties in the characters and plots together until everything connects in the end. It’s a masterpiece.

The Tale of Genji by Murasaki Shikibu, Translated by Royall Tyler 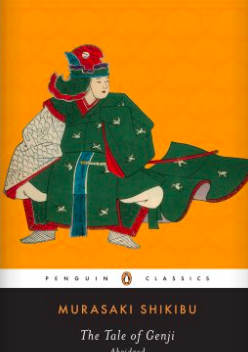 Considered the world’s first novel, The Tale of Genji was being written in Japan at about the same time as Beowulf was being written in England. They could not be more different. The Tale of Genji is an epic romance that takes place in a medieval Japanese court. A princess begs her lady-in-waiting to tell her stories, and the lady does so, weaving tales of the emperor’s son Genji and his political intrigues and disturbing romances (he falls in love with a ten-year-old and kidnaps her). Poetry saturates the page, as do a rich cast of characters that display a range of complexity and nuance. The author’s name is unknown but she’s given the name Murasaki Shikibu in honor of Genji’s primary love interest, the child he kidnaps. 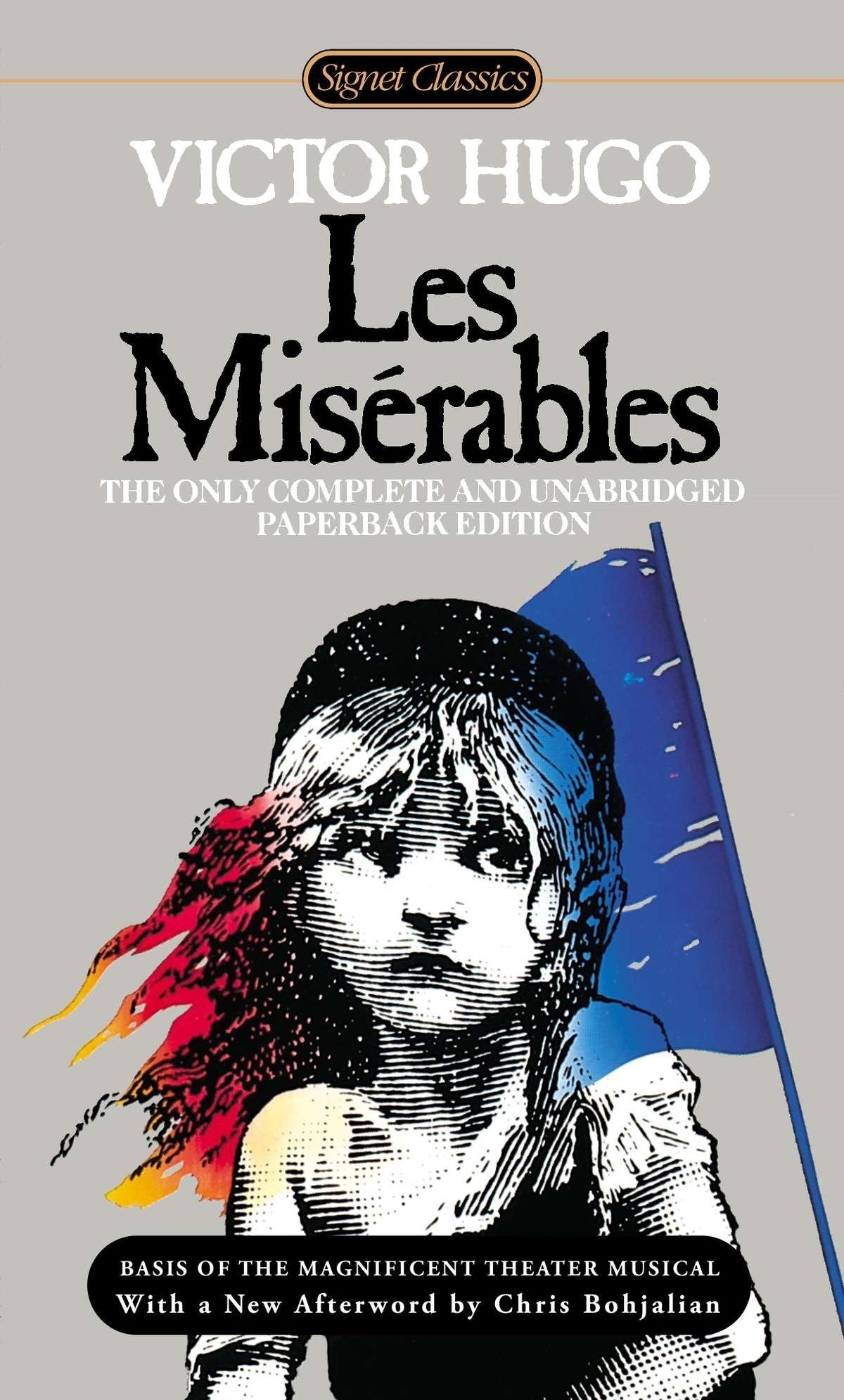 This 19th century French novel is a searing criticism of the French judicial system, and a story of redemption and hope. After many years in prison for stealing bread, Jean Valjean is released. He breaks his bail and becomes an upstanding businessman and mayor, but his jailor, Javert, continues to seek him out for breaking his bail. Meanwhile, Valjean helps a destitute prostitute and adopts her child, and French peasants revolt against their unfair treatment. It’s a sweeping look at French history and a darn good story.

The Count of Monte Cristo by Alexandre Dumas, Translated by Robin Buss 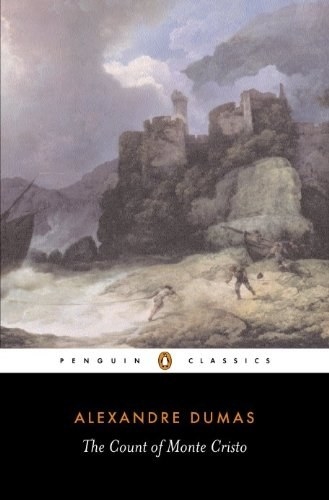 Despite being the longest book on this list, The Count of Monte Cristo is a relatively fast read with lots of action and a clear plot. Edmond Dantes was wrongfully sent to prison. After fourteen years, he escapes and begins to execute his plans to revenge himself on the four men who sent him there. This is perhaps the greatest revenge novel ever written, and very loosely based on true events. ●

Margaret Kingsbury is a writer and educator who gives daily book recommendations, says hello to birds, and has seen fairies. Follow her on Instagram @babylibrarians, on Twitter @readerlymom, or check out her kid lit website, Baby Librarians.