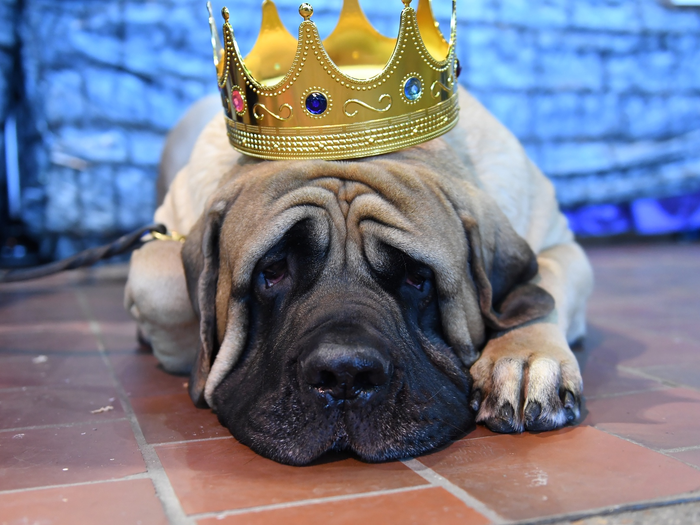 Labradors are the most popular dog in the US, but they've never won Best in Show at Westminster. 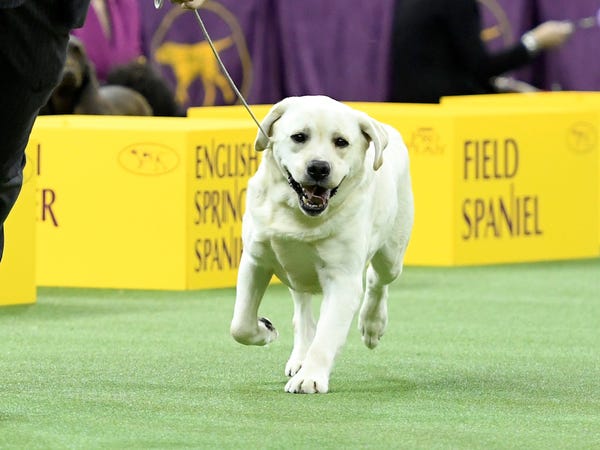 Labrador retrievers have been the most popular dog breed in America for more than a quarter-century, according to the American Kennel Club (AKC).

And while Labs often receive some of the biggest cheers at Madison Square Garden, where the Westminster Dog Show is held every year in Manhattan, they have never taken home Best in Show — or even best of their group.

Many have tried to understand why Labradors can’t catch a break. Some believe they aren’t extravagant enough. Others think their lovable personality gets in the way.

“There are a lot of Labradors that have given me goose bumps, but I think it’s an acquired taste,” Cindy Vogels, a Westminster Best in Show judge, told The Wall Street Journal in 2013.

Golden retrievers are the third most popular dog breed in the US, yet they've also never been named Best in Show. 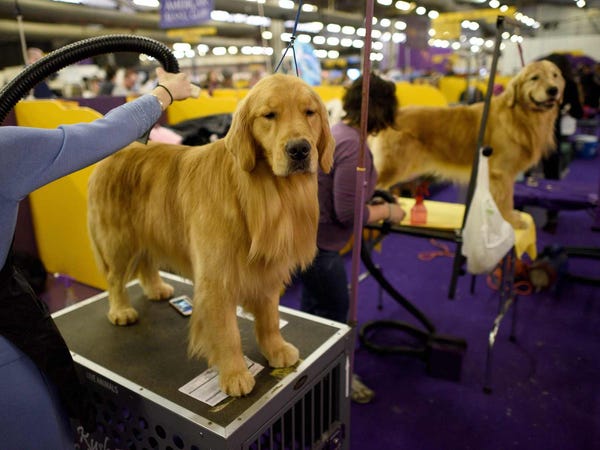 Although golden retrievers have placed five times in their group since they began competing at Westminster in 1928, they’ve only ever won Best of Group once — in 2006.

“If you had a popularity contest, we would win,” Christine Miele, the Eastern vice president of the Golden Retriever Club of America, told The New York Times last year. “We have everything in the world going for us except Westminster, and I think we’re okay with that.”

Dachshunds, the twelfth most popular breed, have won Best of Group at Westminster a whopping 11 times. 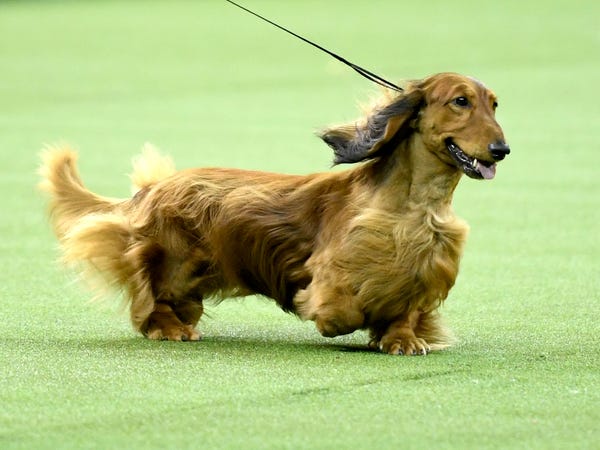 But these pint-sized sausage dogs have never taken home the top prize.

Many believe that dachshunds have struggled in the competition because of their small size.

“I think one of the reasons some breeds don’t make it to the end is that they just aren’t the glamour breeds who are so flashy in the group,” Walter Jones, a vice president of the Dachshund Club of America, told the Times last year.

“Dachshunds compete against many larger breeds in the hound group that are simply more impressive,” he added.

While bulldogs have taken Best in Show twice (in 1913 and 1955), the smaller Frenchie hasn't had as much luck. 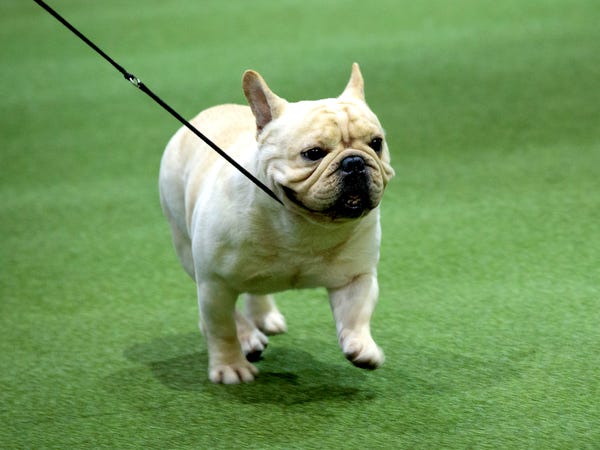 French bulldogs, which are the fourth most popular breed in the US, have been exhibited at Westminster since 1897. But they’ve only won Best of Group once — back in 2010.

Frenchies compete in the Non-Sporting group, where they face stiff competition from the standard poodle (which has won Best in Show four times).

Rottweilers may be the eighth most popular dog breed in America, but they've had little luck at the Westminster Dog Show. 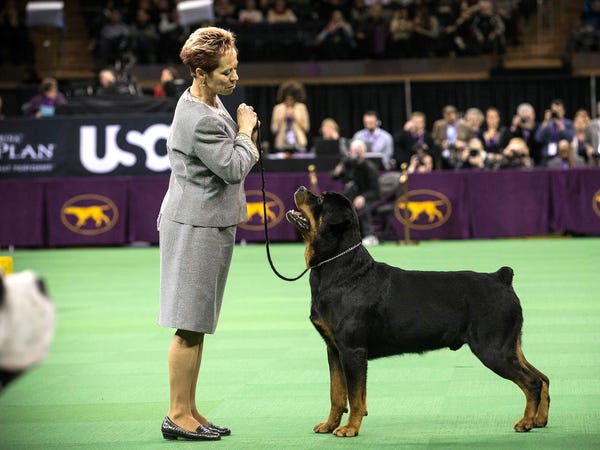 The breed, known for being loyal guardians, has only won Best of Group once (back in 2006).

They often lose out in the Working Group to the boxer and Doberman Pinscher breeds, which have each taken Best in Show four times, according to the AKC.

They're called the "Apollo of Dogs," but Great Danes have had a harder time winning over the hearts of Westminster judges. 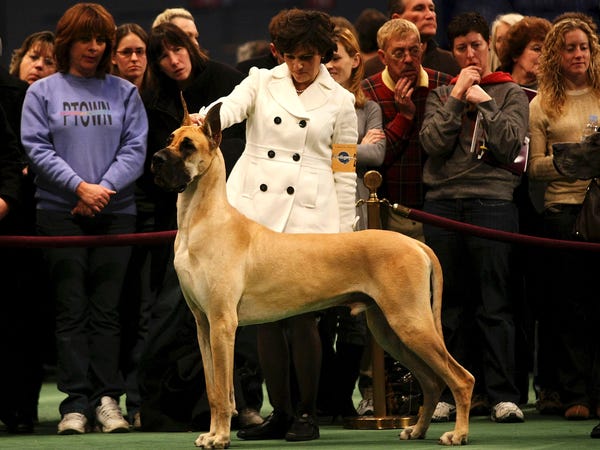 The majestic breed, ranked 16th in popularity by the AKC, has been shown at the Westminster Dog Show since 1887.

But Great Danes have only won Best of Group five times, the latest being all the way back in 1983.

The Pembroke Welsh corgi can count Queen Elizabeth II among its fans. Westminster? Not so much. 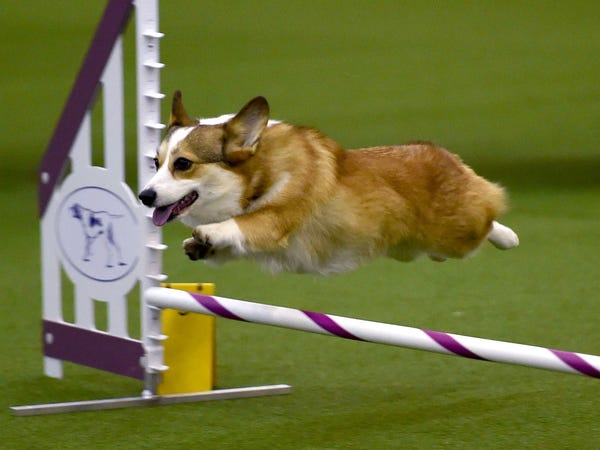 These adorable pups have managed to win Best of Group seven times. But it hasn’t been enough to take them to the top spot.

Among the three sizes of Schnauzers, the Miniature Schnauzer is the most popular in America by a mile. 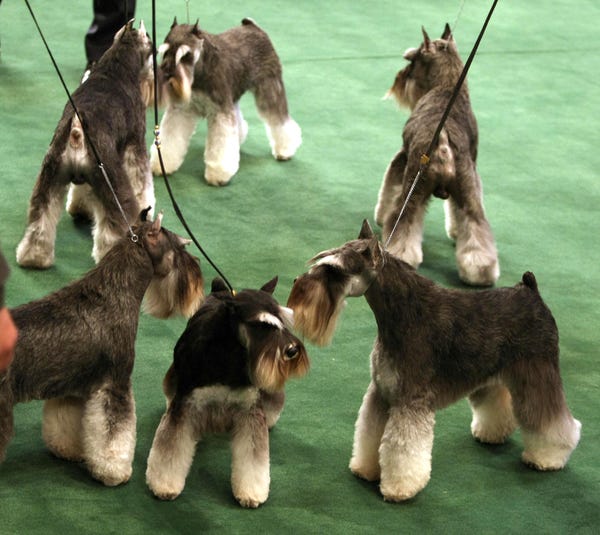 It takes the 19th spot in the AKC ranking, while the Giant Schnauzer is ranked 78th and the Standard Schnauzer is at 89th place.

Yet only the Standard Schnauzer has won Best in Show at Westminster (once, in 1997).

The Miniature Schnauzer has also only won Best of Group once, all the way back in 1947.

Chihuahuas are the 33rd most popular breed, but they have found little love at Madison Square Garden. 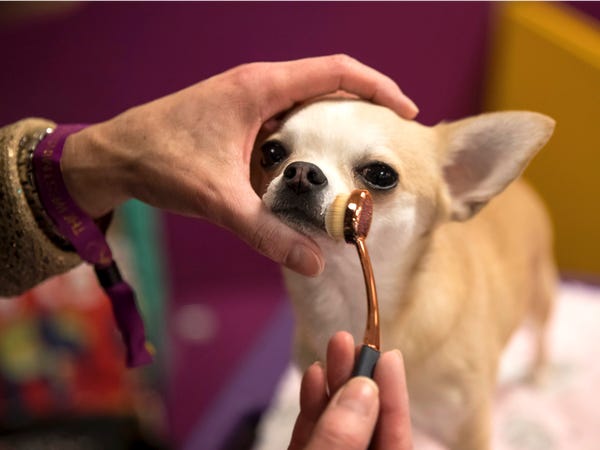 From Taco Bell commercials to a co-starring role in “Legally Blonde” and Paris Hilton’s purse, chihuahuas have always been pop culture phenomenons.

And while they’ve been competing at Westminster since 1904, the sassy breed has only won Best of Group once. Elle Woods would not approve.

The Shih Tzu may have noble roots, but the adorable toy dog has yet to take the crown at Westminster. 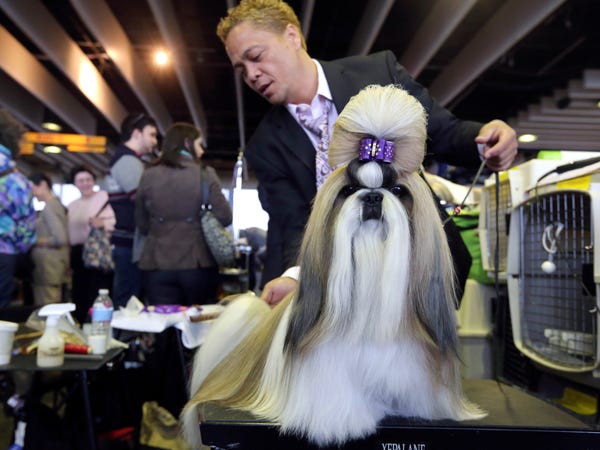 Ranked 20th among the top dog breeds in the US, the Shih Tzu has managed to win Best of Group five times since it began competing in 1969.

But the grand prize has evaded the playful pup, often losing out to the pekingese (which has won Best of Show four times) and the toy poodle (which has won twice), according to the AKC.

Australian shepherds are the 15th most popular dog in the US, yet they've struggled to find the same popularity at Westminster. 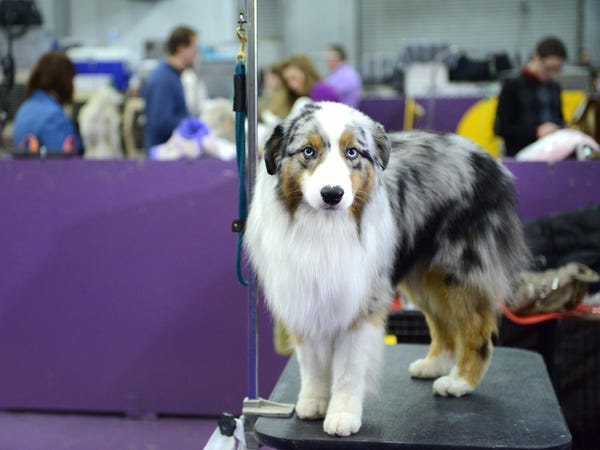 But Aussies, as they’re nicknamed, have received some spotlight since they debuted at the competition in 1994.

The breed took Best of Group in 2008, showing it may have more luck in the future.

The Cavalier King Charles spaniel is the 18th most popular breed in the US, yet it has never won Best in Show — or even Best of Group — at Westminster. 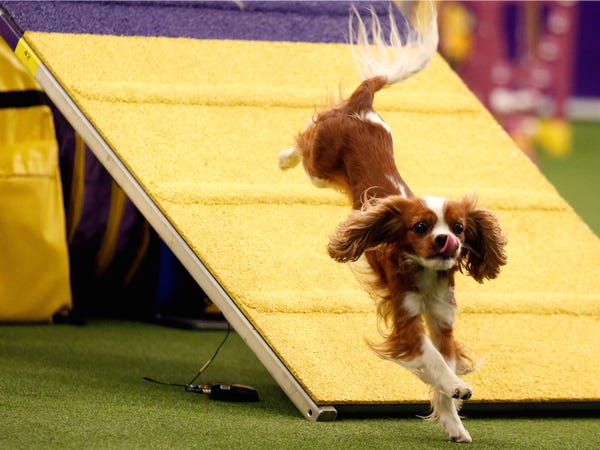 But the beautiful breed has only been competing at Westminster since 1997, so time will only tell if it can make a real splash.

Shetland sheepdogs are known for being extremely intelligent, yet their wits haven't swayed the judges at Westminster just yet. 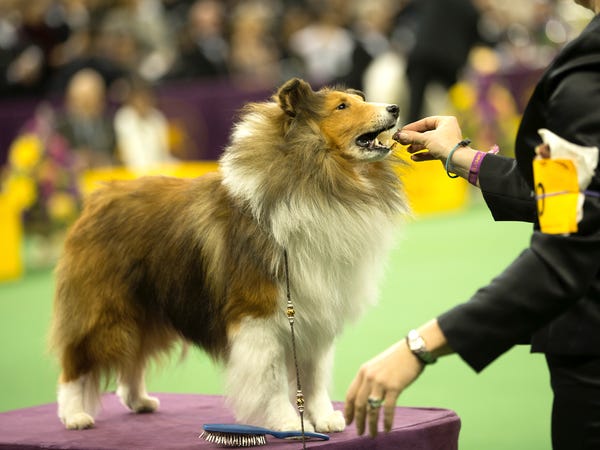 But the herding breed, which takes the 25th spot on AKC’s popularity ranking, has come close to the top spot. Shetland sheepdogs have won Best of Group five times since their debut at the show.

Terrier breeds have won big at Westminster through the decades, but the Boston terrier has had far less luck. 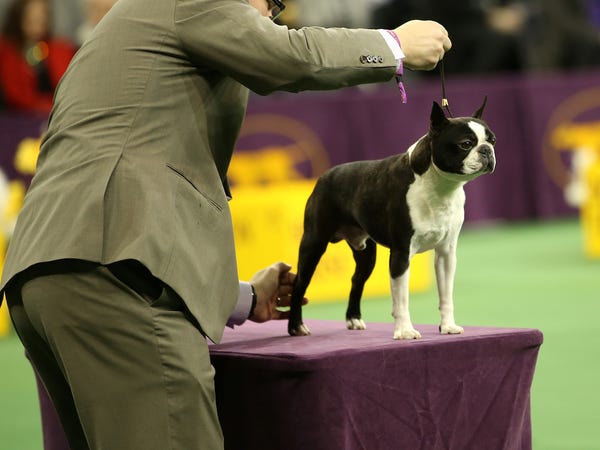 The wire fox terrier and Scottish terrier alone have taken Best in Show more than 40% of the time during the competition’s history, according to the AKC.

But the Boston terrier has never won, despite being the 21st most popular dog in America.

The playful pup, nicknamed the “American Gentleman,” is still waiting to join its fellow terriers at the top.

Dalmatians are among the most famous pups in American pop culture, but they still haven't felt the love at Westminster. 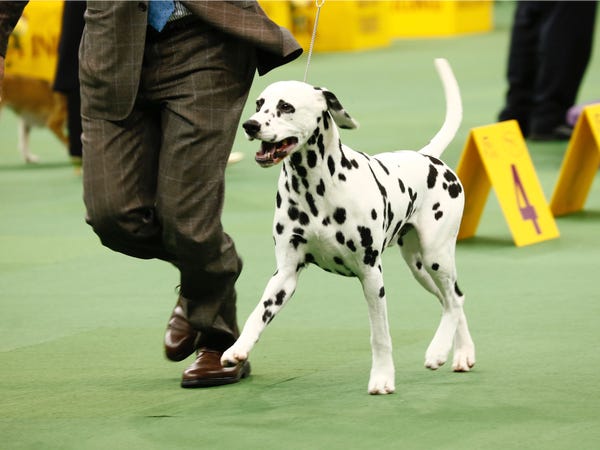 The breed’s spotted coat hasn’t been enough to catch the eye of the Westminster judges.

Mastiffs also have yet to win big at Westminster. 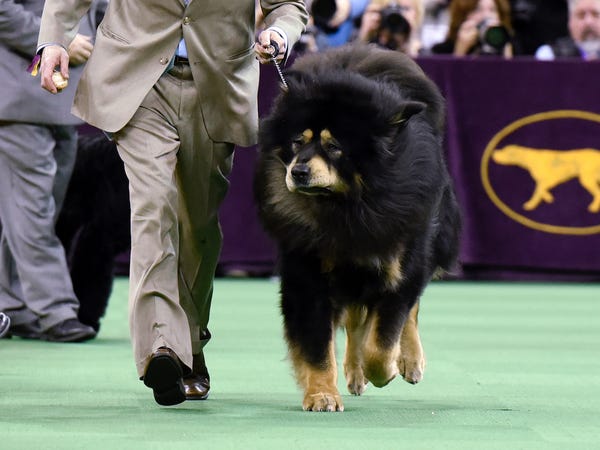 The mastiff is described by the AKC as a “massive, heavy-boned dog of courage and prodigious strength.”

“The mastiff is docile and dignified, but also a formidable protector of those they hold dear,” the description adds.

It’s a rousing introduction, but these massive dogs have still had a hard time winning the hearts of the judges at Westminster. No mastiff breed has ever won Best in Show at the competition.