Sure, you know them. But how much do you really know about them? We got you.

Post-war Americans didn’t want fresh waffle batter or even powdered waffle mix. Frozen foods were the hot commodity so inventor Frank Dorsa created a rotating wheel of waffle irons, which churned out thousands of waffles per hour and let him bring heat-and-serve breakfasts to supermarkets nationwide.

Nope, they had an even funnier name: Froffles. It was meant to be a combination of “frozen” and “waffles” but it didn’t last long. The name was swapped out for Eggo waffles by 1955. 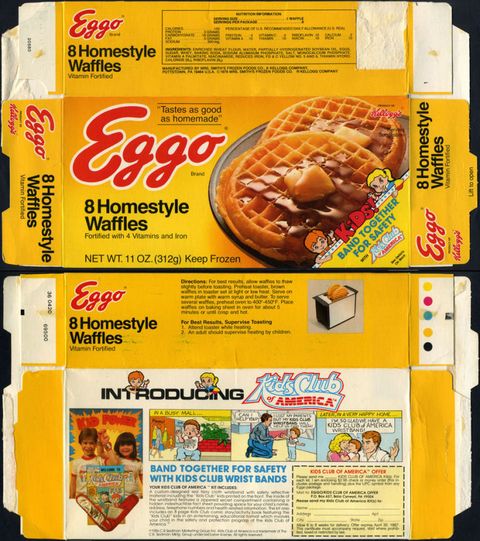 That’s when Kellogg’s acquired the brand (in 1968) and boosted the frozen breakfast to the cult status it’s come to know today.

Thanks to the minds at Leo Burnett ad agency, “Leggo My Eggo” became burned into the brains of waffle fans everywhere for over 36 years. Kellogg’s retired the jingle for a bit in 2008 but brought it back in 2014. Because what’s an eggo with its “leggo” command?

As part of a move to cut all artificial colors and flavors from its product lineup—including cereals like Cocoa Puffs and Frosted Flakes—Kellogg’s has officially removed faux flavors from Eggos for good.