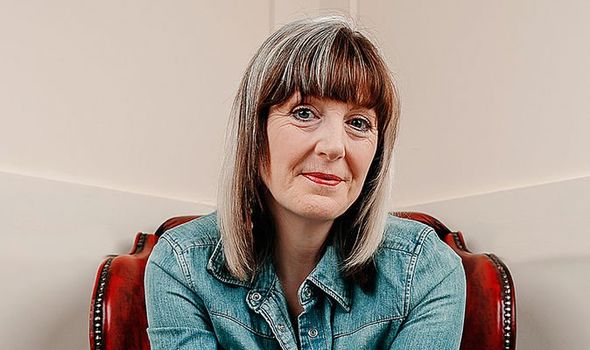 “In our wisdom, we’d done a ouija board over what locals called ‘the mouth of hell’,” says Yvette, 53.

“And when we returned home we all had something happen to us: family members died, pets died ‑ and I nearly got killed on a horse.”

Worried for their safety, the crew went for a blessing at a church to get rid of the hex.

And the ouija board curse wasn’t the only terrifying thing about the trip to Transylvania.

“After being dropped down a 120ft well, I kept hearing knocking noises on the bricks,” says Yvette. “What’s more, I was standing on something making snapping noises. I was told later it was human bones.”

Queen of the supernatural Yvette has hosted her and husband Karle Beattie’s creation Most Haunted since 2002. But she hasn’t always been partial to the paranormal.

She cut her teeth as a children’s TV presenter on Blue Peter, becoming their youngest anchor at 17 in 1987.

“I got my lesson in reading autocue from John Craven,” she remembers. “My confidence grew and it was an amazing experience.”

Much-loved by viewers during her five-year stint, Yvette’s rollercoaster ride with fellow presenter Mark Curry was voted the favourite Blue Peter moment of all time by viewers.

Live TV, she says, could be a hectic experience. “There was huge pressure to get it right. I’d learn my lines and then five minutes beforehand the producer Biddy Baxter would come and put a big red line through everything I’d learnt and say: ‘I’ve rewritten this for you, darling. Learn it now.’ It was petrifying.

“That first year I don’t know how I managed to stay on air because I made so many mistakes. I remember sitting in my car in the BBC car park crying with my head in my hands thinking, ‘I can’t do this. It’s too much. Somebody else who’s better than me deserves this job’.”

Stockport-born Yvette suffered homesickness, too “The BBC put me up in a hotel while filming and I was left to my own devices. All I had was my Walkman and the Janet Jackson album on tape. It was a very lonely time.”

At first she struggled with being recognised in the street. “I came from a very working-class background and I couldn’t understand people who got off on people recognising them,” she says.

“I’d always have a chinwag with people but I’d feel embarrassed and wonder why they wanted to talk to me.”

When her time on Blue Peter came to an end, Yvette began presenting adult programmes.

She recalls how one show let her go after she’d had a baby for “not being sexy enough”.

“If it happened today, I would take them to court. It was outrageous.” A single mum struggling to make ends meet, Yvette recalls once looking in the vacuum cleaner for change.

Little did she know, however, her luck would soon turn around ‑ with a little help from the supernatural.

After meeting husband Karl, 54, on BBC’s City Hospital, the pair drew up a pilot for Most Haunted. “I’ve always been intrigued by the paranormal. We knew other people were too,” she says.

“We came up with the idea in the early 2000s and ploughed our life savings into making a pilot. But at first nobody wanted it.”

That soon changed, and Most Haunted ‑ presented by Yvette and Karl ‑ went on to run from 2002 to 2019 on Sky Living, and then Really.

Now, it’s a smash hit on YouTube and the Most Haunted channel has more of than 80k followers.

Yvette isn’t surprised it’s been a success as she is certain that ghosts and ghouls live among us.

“The first time I saw a ghost was when I was in my early 20s at my mum’s house in Stockport. It was a cul-de-sac of five houses with woodland at the bottom where the railway track ran from Stockport to Euston,” she says.

“I woke up one night and there was the torso and head of a Second World War soldier staring at me at the foot of the bed. It was in colour and looked solid ‑ his eyes were boring into mine and he stayed there for four or five seconds.

“As you can imagine I screamed, ran into my mother’s room and spent the night under the duvet shaking.”

Yvette found out that neighbours had all had similar experiences, and later spoke to a local historian who told her when they were transporting soldiers from Stockport to Manchester in the Second World War, one young squaddie threw himself off the train and was run over.

“It sent a chill down my spine,” says Yvette.

And then there was the time she believed her late father sent her a message from beyond the grave. “I kept hearing knocking noises in my house and didn’t know where they were coming from,” recalls Yvette.

“I pulled out my phone and asked the ghost to knock when I hovered my finger over the right letter on the keyboard. I was dieting at the time and got a message which I believe was from my dad saying: Stop, you skinny cow.

“It was incredible. I feel so blessed to be able to still communicate with him.” And that’s not the only time she’s been spooked in her own home in Sandbach, Cheshire, which has foundations going back to the 1400s. Yvette says when her family moved in they sensed the presence of spirits.

“The house has been quiet for a long time now but when we first moved in about 17 years ago we’d hear someone knocking on the front door and nobody was there,” she remembers.

“Once, I couldn’t get into the kitchen. At first I thought the dog was lying in front of the door but when I pushed there was a heavy chair against it ‑ and the rest were stacked on top of the kitchen table. I was alone and it was scary.”

Elsewhere ghosts would rearrange teddy bears, and once threw CDs at her daughter Mary, now 22.

“We discovered it was two children who lived here in the 1700s,” says Yvette. “We asked them to stop because they were scaring the children ‑ and they did.” Mary and son William, 27, are used to their parent’s forays into the paranormal. “They’ve grown up with it really,” says Yvette.

Her normal is the paranormal. “It’s a weird job, yes, but I wouldn’t have it any other way.”

The Ghost Hunter Chronicles: The House in the Woods by Yvette Fielding (£7.99, Andersen Press) is out now in paperback