Yamiche Alcindor is both thrilled and grateful that her new gig as the ninth-ever moderator of PBS’ “Washington Week” is giving her the opportunity to “shape” and bring her “whole self” to her reporting.

“I’m really lucky that this show in some ways models the freedom that I’ve had in my other jobs to really shape my reporting,” she told TheWrap. “But there’s also the sense that ‘Washington Week’ and [D.C.’s flagship public media station] WETA want me to bring my whole self to that.”

As for what her “whole self” entails, she pointed to her emotional sensibilities and the fact that her eyes still well up during coverage sometimes. She hopes she’s doing a service in representation, too, by being someone others can connect to as “this millennial Black woman with curly hair and a Haitian background.” 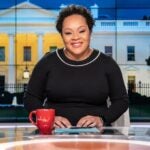 “I don’t feel like I’m being forced to fill the shoes of anyone,” she noted, but added she’s thrilled to be following in the footsteps of her mentor, the late Gwen Ifill, who won a Peabody Award during her longtime moderation of “Washington Week.”

In addition to planning this week’s show, Alcindor participated in the PBS NewsHour special, “Race Matters: America After George Floyd.” She traveled to Missouri, where she reported for a year and a half following the death of Black teen Michael Brown at the hands of white police officer Darren Wilson, who was never charged.

“For me, it was insanely surreal to go back to St. Louis after all that’s happened,” she said, describing how her segment of the special looked at the history of policing in the region, as well as the history of how Black communities were pushed out of cities around America. “It was a heartbreaking assignment because it forced me to really think through just how large of a problem systemic racism is and just how ingrained some of the policing tactics in the targeting of Black people and Black bodies is and how long it’s going to take to deal with that.”

Alcindor reflected on the year anniversary of the police killing of George Floyd in Minneapolis last May, which resulted in a murder conviction for white officer Derek Chauvin, and how much pushback against systemic racism was already taking place before that. In her coverage, she said, she’s “wanted to really look at the real challenges that still lie ahead and why it is that Black people are still so terrified of the police and why it is that Black families have to teach their children to try to stay alive in police interactions, even if they’re not doing anything wrong.” 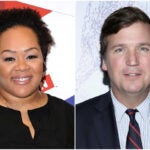 Friday night’s show will stay on that theme, capping her week of Floyd-pegged coverage, but by no means ending the conversation about the issues at the heart of the story. Friday’s episode will feature a panel of reports — MSNBC’s Trymaine Lee, CBS News’ Wesley Lowery, NPR’s Ayesha Rascoe and CNN’s Sara Sidner —looking at racial justice and policing in America a year after Floyd’s murder.

“It’s going to be a special largely dedicated to the life and legacy of George Floyd. We’re going to, of course, deal with the news in Washington, whatever that news may be. The president’s giving a big economic speech and there’s the budget and other things that are going on, but for the bulk of our show on Friday, I’m going to be talking to reporters who are at the center of these stories when you look at racial justice and policing,” she explained.

When PBS first announced her promotion to moderator of the show, which has been on the air since 1967, sheimmediately said that her “guiding light will be focusing on the impact of politics on everyday people and vulnerable populations.” She told TheWrap, “I hope that people will look at my time at ‘Washington Week’ and say, ‘She kept the promise of centering everyday people’s lives, working class Americans’ and middle-class Americans’ lives.”