Walter Mondale, who served as vice president under Jimmy Carter, died at the age of 93 on Apr. 19, according to his family, and tributes from the former president and more are being shared.

Walter Frederick “Fritz” Mondale has died at the age of 93, his family revealed in a statement on Apr. 19, according to CNN. Although no cause was given, it was confirmed that the former vice president passed at his home in downtown Minneapolis while surrounded by family, spokesperson Kathy Tunheim said, the outlet further reported.

“It is with profound sadness that we share news that our beloved dad passed away today in Minneapolis, Minnesota,” Walter’s family said in the statement. “As proud as we were of him leading the presidential ticket for Democrats in 1984, we know that our father’s public policy legacy is so much more than that.” 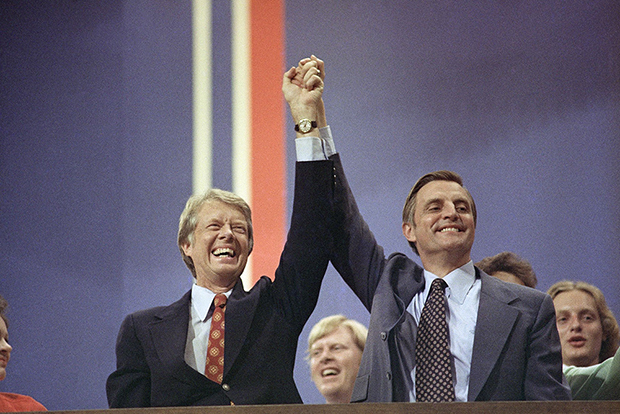 Once Walter’s death was announced, it didn’t take long for former president Jimmy Carter, 96, who he served under from 1977-1981, and other political figures and celebrities to react.

“During our administration, Fritz used his political skill and personal integrity to transform the vice presidency into a dynamic, policy-driving force that had never been seen before and still exists today. He was an invaluable partner and an able servant of the people of Minnesota, the United States, and the world,” Jimmy said in a statement. “Fritz Mondale provided us all with a model for public service and private behavior. Rosalynn [Carter] and I join all Americans in giving thanks for his exemplary life, and we extend our deepest condolences to his family.”

Former president Bill Clinton took to Twitter shortly after Walter’s death to also share a tribute. “Walter Mondale believed in the power of government to make a positive difference in people’s lives, and proved it at every stage of his remarkable career—with deep policy knowledge, a tireless work ethic, and uncommon decency. Hillary and I loved him and will miss him very much,” he wrote.

Barack Obama said that Walter “changed the role of vice president” in a tweet he shared. “Walter Mondale championed progressive causes and changed the role of VP—so leaders like @JoeBiden could be the last ones in the room when decisions were made. In selecting Geraldine Ferraro, he also paved the way for@VP to make history. Michelle and I send prayers to his family,” it read.

Minnesota Senator Amy Klobuchar also shared a couple of tweets with one reading, “On the wall of the Carter Library is a quote of Walter Mondale’s at the end of their time in office: “We told the truth. We obeyed the law. We kept the peace.” That pretty much sums up Walter Mondale’s life and service.”

Vice President Kamala Harris shared her thoughts of Walter and sadness over his death in a tweet as well. “Vice President Walter Mondale led an extraordinary life of service—in uniform during the Korean War, as a Senator, and as Vice President. I was able to speak with him just a few days ago and thank him for his service. I’ll miss him dearly, and my heart is with his family today,” she wrote.

Before Walter’s death, he reportedly knew the end of his life was near and sent an email, obtained by CNN, to former staffers that acknowledged his “time has come.”