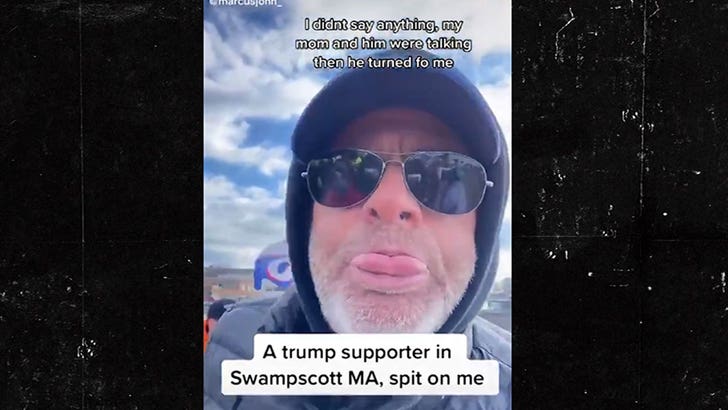 Denying there’s a pandemic is one thing, and then there’s this … actively, and disgustingly, committing a crime by intentionally spitting on someone — and, stupidly, doing it on camera.

This Trump supporter went face-to-face with Black Lives Matter protesters over the weekend in Swampscott, MA. The guy who posted the video claims the man in shades and a Trump 2020 cap just turned to him, unprovoked, yelled “all lives matter” … then started hacking and spitting.

The video is pretty graphic … when ya see this jerk loading up to spit, which he did at least twice, on people standing across from him. As if this video wasn’t enough evidence … a police officer on scene witnessed the crime.

It’s called assault and battery or unwanted touching — and that does include spitting on someone — and it’s a crime. Cops were there observing the protest, and did cite the guy for assault.

This vile individual is clearly ignoring the images of patients packed into hospital ICUs, stressed nurses and doctors … or the fact more than 330,000 Americans are already dead from COVID-19. But, intentionally doing what’s seen here?

We really are living in 2 Americas now.