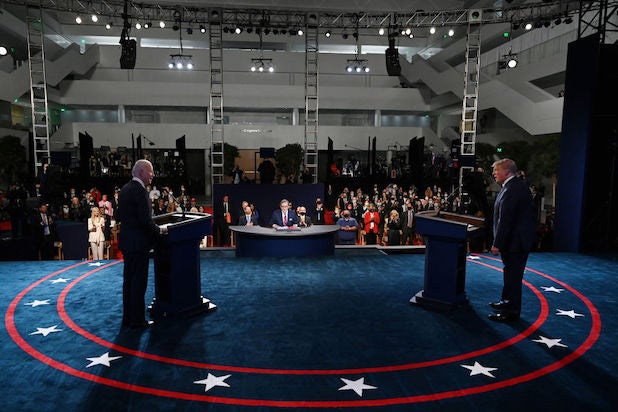 Donald Trump and Joe Biden will each take turns being muted while the other is speaking at Thursday’s presidential debate, the debate commission said on Monday night.

“We realize, after discussions with both campaigns, that neither campaign may be totally satisfied with the measures announced today. One may think they go too far, one may think they do not go far enough,” the CPD said in a Monday evening statement. “We are comfortable that these actions strike the right balance and that they are in the interest of the American people, for whom these debates are held.”

The 90-minute event, moderated by NBC’s Kristen Welker, will be split into six 15-minute sections that focus on the COVID-19 pandemic, “American families,” race in America, climate change, national security and leadership, according to a list released by the debate commission.

The rule change comes in response to the first Trump-Biden debate, in which Trump interrupted Biden and moderator Chris Wallace a total of 145 times, according to a Fox News analysis. Thursday’s debate is expected to be the second and final debate between the two candidates.