Kourtney Kardashian has been plotting her exit from Keeping Up With The Kardashians for a long time, and her dreams are about to become a reality. Shortly after the eldest KarJenner sibling confirmed she planned to step back from filming, the famous family announced that the entire series would come to an end in 2021 after 20 seasons, and fans can’t help but think Kourt had some power over it all. These tweets about Keeping Up With The Kardashians ending all make one joke about Kourtney … and they are wildly funny.

Kourtney explained her decision to step back from the reality show during an interview with Vogue Arabia in July 2020, saying: “I was feeling unfulfilled and it became a toxic environment for me to continue to have it occupy as much of my life as it was. Privacy is something I have come to value and finding that balance of private moments with being on a reality show is hard … I am following my happiness and putting my energy into that which makes me happy.”

Less than two months later, the family announced that KUWTK was ending for good. Kim Kardashian was the first to share a statement about it on Instagram, followed by her mom, Kris Jenner, and sister Khloé. Kourtney, however, only posted the official statement from the family and told her fans that she planned to gather her thoughts and "share them in a bit," seemingly proving she’s not too heartbroken over it. 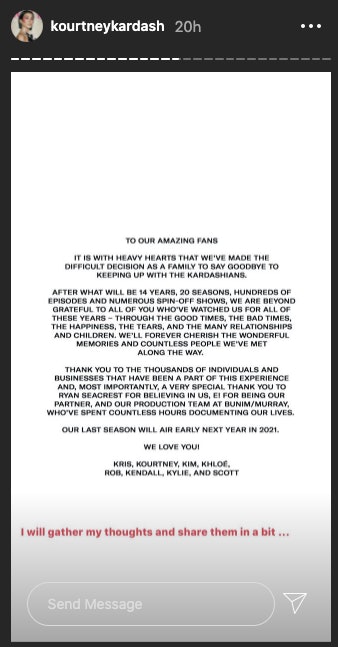 Of course, Twitter users had the most hilarious responses to the news, blaming Kourtney for being the one to inspire the show to end, and saying she must be thrilled that her family won’t be filming anymore, either.

Here’s what fans are saying, and it’s clear they don’t think Kourtney’s exit and the timing of the show ending are coincidences.

Whether or not Kourtney had anything to do with the series coming to an end, fans are having a blast assuming she’s the mastermind behind the decision.