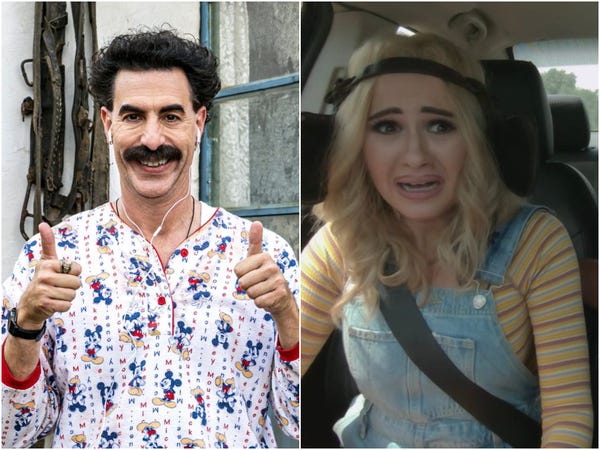 Sacha Baron Cohen has said that if his "Borat: Subsequent MovieFilm" costar Maria Bakalova isn't nominated for an Oscar, it will be a "travesty."

In the "Borat" sequel, 24-year-old Bakalova plays Tutar, Borat's 15-year-old daughter. The movie is as much Tutar's as it is Borat's, with Bakalova's role providing some of the film's most surprising moments, including the highly controversial Rudy Giuliani scene,

"We interviewed 600 young women from all around the world and she is hilarious, she is one of the most courageous actors in history. If she doesn't get nominated for an Oscar then that's a travesty," Cohen said.

"She's hilarious, and she has the capacity to deliver a scene and make you cry, which is what finally got her the part. When we did the break-up scene in the movie, I had to stop it. I found myself getting quite emotional.

Cohen called the actress, who could be seen getting emotional herself as Cohen waxed lyrical about her talents, "one of a kind." This is the Bulgarian actress' first major acting credit.

"Imagine coming to America for the first time, she'd barely been out of Bulgaria, and suddenly she's playing a role with real people in some terrifying situations and she got through it all. I don't know how, but she is a revelation."

"Borat" does have a small history with the Oscars — the 2006 original was nominated for best original screenplay, although Cohen himself was snubbed of a best actor nomination despite winning the Golden Globe for best actor in a comedy or musical.

It remains to be seen whether Bakalova will be campaigned in lead actress or supporting actress. As well as pushing for an Oscar nomination for Bakalova, Cohen seems to be going for a nod himself for "Borat."

Cohen also stars in Aaron Sorkin's "The Trial of the Chicago 7" and was expected to campaign in lead actor. However, as reported by IndieWire, he will now be going up against his fellow "Chicago 7" costars, including Mark Rylance, Jeremy Strong, and Yahya Abdul-Mateen II, in the supporting actor category.

That opens up a slot in best actor for Cohen, as one actor can't have two nominations for lead actor or actress. Cohen will likely be campaigning for both movies, and could end up with a pair of Oscar nominations including a historic one for "Borat: Subsequent MovieFilm."